Diary of a Teenage Jewel Thief
by Rosie Somers 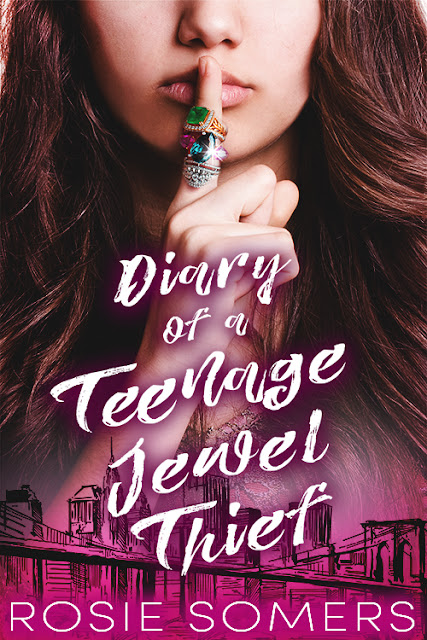 Most sixteen-year-olds shouldn’t know where museums keep their rarest jewels (the basement) and they really shouldn’t know that vans make the worst getaway cars. But for Marisol Flores, a life of jewel thievery is a birthright handed down from generation to generation, even if she didn’t ask for it. So when a rival thief targets Mari and her mother, Mari’s more than happy to flee to the anonymity of bustling New York City.
Blending in is a dream come true for Mari, but keeping her former thieving ways a secret gets way more complicated when handsome Will Campbell sets his sights on her. She can’t help but like his terrible puns and charming grin…but when her past catches up with her, it’s not only her life—and her anonymity—that’s at stake.
Will could be the next target.

My phone rings. The tinny chime splits the silence and cuts through the romance of the moment, but I don’t move to answer it. Maybe if I stay just like I am, he’ll still kiss me.
“You gonna answer that?” Will’s voice is a breathy almost-whisper against my lips.

Rosie Somers is a beach-going book addict who’s been crafting stories since before she learned her ABCs. When she’s not busy trying to bring the characters in her head to life on paper, she can be found volunteering with local animal rescues, crocheting funky hats for her friends, or eating herself into the poorhouse at Chipotle. Her fondest dream is to one day own a goat.