Outside it may be frosty, so turn the heat way up with these stories of desire!
Can a determined woman executive and a playboy billionaire survive being stranded together in a snowstorm? Jennifer Probst depicts an encounter almost too hot to handle…

Drew and Kate play an encore to Tangled in this sexy take on a “Christmas Carol” by Emma Chase. When a Christmas Eve argument condemns Drew to a troubled night, three dream women teach him that no gift could be more tantalizing than Kate…

With Kristen Proby, ski slopes are quite delightful. Grace Douglas is sure she’ll never learn to ski, but instructor Jacob Baxter could teach her lessons of a different kind…

What could be hotter than a firefighter? Kate Meader shows how hot it can get as Beck Rivera and heiress-turned-tattoo-artist Darcy Cochrane discover that nothing ignites holiday flames like rekindling a lost love…

Some of my favorite authors in one HOTTTT anthology. What more could I want?!??

This was one super sexy read with exciting characters. Filled with smoking hot chemistry and many delicious sex scenes that will melt your panties, there was never a dull moment. The men in this anthology are to die for and I have to admit I was a bit jealous of the gorgeous ladies who got to spend their nights cuddling up to them.

If you are looking for a great Christmas read to spice up your holiday season, this is definitely the one to grab.

Jennifer Probst’s New York Times and USA Today bestselling novels, novellas, and ebooks include the acclaimed Marriage to a Billionaire series, as well as Searching for Someday and Searching for Perfect. She lives in upstate New York.

Emma Chase is the New York Times and USA Today bestselling author of Tangles, Twisted, Tamed, and Tied. She lives in a small town in rural New Jersey with her husband and children.

Kristen Proby is the New York Times and USA Today bestselling author of Loving Cara and Seducing Lauren, as well as the popular With Me in Seattle series. Kristen spends her days with her muse in the Pacific Northwest.

Melody Anne is the New York Times bestselling author of the indie published Billionaire Bachelors series, the Baby for the Billionaire series, and the Surrender series, and she has a new series coming soon from Pocket Books. She lives in the Pacific Northwest.

Kate Meader is the author of the sexy new series Hot in Chicago, coming soon from Pocket Books. When not writing she works in an academic library in Chicago.


Lies have the power to sound right, yet feel wrong. They have the ability to confuse your heart and twist your mind. The problem is, sometimes these lies become easier to believe than the truth. They become a sort of safety net from reality, a way to avoid what lingers in the back of your mind. And some say that over time, if you believe them long enough, they become real.


At least, that’s what my mother had hoped would happen in my case. But just like every lie ever told, all it takes is one small crack in that foundation for the whole thing to come crashing down.


Because everything I thought I knew about myself was a lie. A beautiful and heartrending lie. I wasn’t the Defect my parents would regretfully see off to college before turning their backs on me. I wasn’t the weak friend who didn’t have enough backbone to stand up for what’s right, nor was I the loner without a purpose or a chance at real love. And I sure as hell wasn’t the weapon Bael and the members of the Darkyn Coven intended me to be.


But I am the weapon the Primeval Coven needs me be. Or so they keep saying.


In my Coven, there are two kinds of people: The Hunters and the Witches. They used to hate each other, even though they were on the same team, back in the old days when cars didn’t exist and time was tracked on a sundial. They hated each other so much that eventually a war was brought on by one of the original Witches—a Divine named Mourdyn.


The war was known as the Great Battle of the Covens. It was meant to wipe out the existence of every Hunter, and it devastated the population of my people, the Primevals. It annihilated the population of the Darkyns—the Witches who abandoned our Coven to follow the whims of Mourdyn and his persuasive lies.


But even though a lie can be struck down—imprisoned even—it can’t ever be fully erased. The scars it leaves behind on this earth and in our hearts are eternal, and somewhere along the way, someone will pick that lie back up and breathe life into it once more. Give it the wings it needs to rise again. Only, this time, that lie will be stronger, with an even greater purpose.


And that’s the part that scares me the most.


I glance down at my leg. The burn marks left behind from Bael’s wrath still tingle with echoes of the scorching fire he sent after me after I escaped with Weldon, reminding me that I’m nowhere near ready for the fight that’s sure to come.


And that has to change.


That’s part of why I agreed to come here to Ethryeal City—to the heart of our Coven. It’s where Hunters and Witches in an affinity bond enter as Night Watchmen and leave as Elites. Where those who have broken our Coven laws go to face the High Priesthood. Where those who need refuge… those like me… come to hide.


The only thing is, I never agreed to being separated from everyone I know. They call it debriefing, but with every day that passes, I’m beginning to wonder… to question how long it actually takes.


It’s been seven days and fourteen hours since my unfortunate and unplanned encounter with Bael—the Demon King of the Underground. In these last seven days, I’ve made more promises than I can count on two hands. And in those promises, I think I’ve told more lies than I ever have in my life.


Honesty seems to have slipped out of her bedroom from inside my integrity and, in her place, deceit has crept in with the offer of survival. If I just nod along with the many blending faces all interviewing me, then maybe somehow, I’ll make it out of this phase in my life alive. I’ll make it back into Jaxen’s arms and back into the graces of the friends I’ve come to trust.


But what deceit doesn’t offer is solace, because you can’t fool deceit. It knows every trick in the book.


Every day, twice a day, for the past four days, I’ve recounted in specific order how my friends and I nearly lost our lives in hopes that we’d gain an advantage on the Darkyn Coven and intercept them from taking the Dagger of Retribution. The one that has the power to initiate the removal of the Veil that separates the Underground and all its evil from the humans. The very Dagger that only I have the power to touch.


I’ve been singularly interviewed by every member on the Priesthood, and then by every general and Elder within the hierarchy of our Coven.


For the past four days, since I left the safe house beneath the church owned by the Night Watchmen, when I haven’t been in a laboratory undergoing strenuous testing, I’ve spent the remaining hours kept in a holding cell stripped of all personality. Chained down by claustrophobia. Shackled to the fears given free rein to destroy my hope.


I don’t have a home anymore. I have four white walls, one white jumpsuit, a white bed, white sheets… the color was bleached from my life the moment I crossed into the legendary Ethryeal City. I keep trying to remember the last time I saw Jaxen’s face, but my soul has fed so often on the happiness of that memory, I fear it’s disappearing. And I don’t know when I’m going to see him again.


They took everything away from me just to keep me repressed. Controlled. But what they don’t know is they cannot control what they do not own, and they do not own me. I can’t trust anyone. No one but myself, because all I know is I am more of a threat to them than I thought.


And the High Priesthood doesn’t know what to do with me.


What if your destiny lay on the other side of death?

The annual Culling ceremony is a day every coming-of-age novice looks forward to within the Primeval Coven. It’s the start to being initiated into the Night Watchmen, humankind’s protectors, and it’s the long-awaited day when novices discover if they’re a Hunter or a Witch. 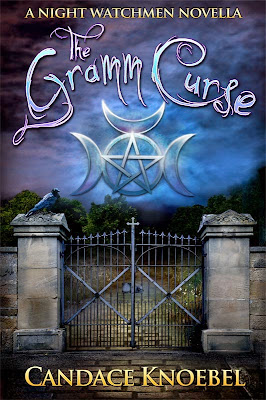 Links for purchase (available in ebook and paperback):
Amazon: http://amzn.com/B00K3QPPZ6