What do you get when you pair up a wealthy, well-bred heiress – sheltered and educated with an impulsive streak – and a gambling, mercenary Texan cowboy? 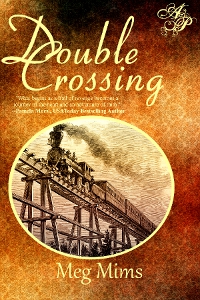 Double Crossing is a twist on “True Grit” but it takes place on the 1869 Iron Horse – months after the Union and Central Pacific railroad lines joined at Promontory Point. Nineteen-year-old Lily Granville is stunned with her father is murdered and vows to track the killer across the country to California - who also stole a valuable gold mine deed.

Once Lily arrives in Omaha, she discovers that someone is now tracking her. Could it be the killer? And why? Lily decides to enlist “Ace” Diamond, who agrees to protect her – for a price.

Q for Lily – how did you feel when you first met Ace?
A – Since he literally crashed his way into my life, I did feel a twinge of compassion… he was injured, and I felt my Christian duty was to help… until I caught sight of his Confederate belt buckle with the Texas Lone Star. I *know* my father would never have approved of an ex-Rebel soldier – and that deepened my guilt. However, after someone searched my hotel room and my personal belongings, I had no choice but to hire Ace Diamond for protection. He was the most unlikely “angel” as an answer from God after I’d prayed for help! I suppose beggars can’t be choosers, though.

Q for Ace – what was your first impression of Lily?
A – First time I set eyes on that pretty filly, all golden-haired and sweet, with the most kissable mouth, I was bushwhacked. Couldn’t remember my own name.

Q for Lily – were you surprised that Ace bargained with you over his fee?
A – To be truthful, I was. I offered him a fair wage, but then he demanded an exorbitant amount in addition to the expense of a Pullman ticket! But it made sense that he had to be near on the train. Still, he insisted on a bonus once we reached California. And I was furious when I discovered that Ace had bragged to the other gentlemen in the smoking car about that bonus I promised my uncle would pay - him when we arrived in California! And that was before we were halfway across country. Really, Mr. Diamond was quite presumptuous. And forward, given his roving—well, let’s just say he’s no gentleman. I shouldn’t have been surprised at that!

Q for Ace – why did you accept Lily’s offer?
A – Easy as ropin' a baby steer, riding shotgun on a train. But that stubborn little gal sure fooled me. I earned my fee. And then some.

Q for Lily – before the railroad trip, what was your dream for a happy future?
A – I wanted… well, I wasn’t really certain what I wanted and whether I'd be happy becoming a missionary to China. I know my father wanted me to marry and provide him with grandchildren. He believed I deserved a decent man, a good provider and one who supported my ideas. I did want to experience adventure and independence, since I'd lived a sheltered life in Evanston, just north of Chicago, but I also wanted to come home again where I felt safe. I so enjoyed long talks with Father, sketching my pet lizard in the lovely garden and watching the leaves change in fall and the snow fall in winter. Father’s death changed everything, however. I was devastated. And I *had* to see that justice was done.

Q for Ace – what about you, same question?
A – A good woman in a nice, cozy bed. I’ve got my eye on a certain woman now.

Hmm -- seems Ace is a man of few words. Lily will soon find herself in hotter water in the sequel, Double or Nothing -- I hope readers are looking forward to more adventures!