Book Blitz: Excerpt + #Giveaway: More Than Once by Elizabeth Briggs

More Than Once
Elizabeth Briggs


Special release week price of $0.99! Get this stand-alone holiday romance now before it goes up to full price!


She’s trying to be good. He loves it when she’s bad.
Andrew West is done being the nice guy. After a marriage proposal gone wrong, he’s started over in a new city and he’s never risking his heart again.
Becca Collins is done being the bad girl. After quitting the band she played bass for, she’s going to prove to her family that she’s really changed.
When Becca’s dumped by her boyfriend and fired from her job on Christmas Eve, all seems lost, until she runs into a former one night stand–Andrew. To impress her parents, Becca convinces him to pretend to be her perfect boyfriend for their holiday dinner.
After Andrew shows Becca he’s all bad boy in the bedroom, neither wants to pretend anymore. But when Becca’s invited to rejoin her band for a show and Andrew’s forced to face his ex, they both wonder if they’re ready to take a leap again–or if they’re doomed to fail in life and love a second time.


The Chasing The Dream series:

#0.5 More Than Exes: get it FREE by signing up for Elizabeth’s newsletter!
#1 More Than Music
#2 More Than Comics
#3 More Than Fashion
#4 More Than Once
#5 More Than Distance (coming in 2016!)
Get the Chasing The Dream box set!

EXCERPT
She had to be cold, wearing only a black leather jacket over her clothes, but she didn’t show it. I shrugged out of my coat and stepped close, draping it over her shoulders, even though I’d be freezing in a few minutes in only my suit. Her eyes fluttered open, and she gave me a faint smile. “Thanks.”
I nodded, my throat tightening at the sight of that smile. She wore the sexy, bright red lipstick I remembered from before, and I had the strongest urge to kiss it right off her. God, this girl was dangerous. I’d spent the last few months completely dead inside, yet somehow she’d jolted me back to life in a matter of minutes. Problem was, I wasn’t sure I was ready to be resurrected yet.
She pulled the jacket tighter around herself and took a deep breath. “What about you? Any big plans for Christmas?”
“No plans.” I looked away so she couldn’t see what it cost me to admit that. “I just started at this job a few months ago and I’m trying to make a good impression, so I didn’t want to ask for any vacation time to visit my parents back in Michigan.”
“That’s rough. What about friends here? A nice guy like you must have made some by now.”
“Nope…it’s just me this year.” Friends? Ha. I shrugged it off, rubbing my hands together for warmth. “It’s all right. I have a lot of work to do, and the office will be nice and quiet. I’ll even get paid time-and-a-half if I come in on Christmas Day.” The excuse sounded pathetic even to my ears.
“No shit?” She let out a short, harsh laugh. “That is the saddest thing I’ve ever heard. You can’t be alone at Christmas!”
“It’s not that big a deal, really…”
She suddenly straightened up, her eyes widening. “I have the perfect idea.”
“You do?”
“It’s the best solution to both our problems. You come with me to my family’s holiday dinner tonight and pretend to be my boyfriend. You’re definitely the kind of guy who will impress my parents, and that way you won’t have to spend Christmas Eve alone.”
“Pretend to be your boyfriend?” A wave of panic swept over me at the thought. I wasn’t ready to be anyone’s boyfriend—fake or otherwise. “I’m not sure that’s such a great idea. Couldn’t you just tell your parents what happened?”
“Ugh, of course you would say that. Fine, forget it. It was a stupid idea anyway.” She pushed off the car and unlocked the door with her key.
“Hang on,” I said, taking her arm and turning her back to face me. If she got in that car, I’d probably never see her again, and I couldn’t let her go just yet. Not until I fixed things between us somehow. “What kind of food are we talking here?”
A slight grin touched her lips. “My mom always makes enough food to feed the entire neighborhood. Turkey and ham, stuffing, mashed potatoes, yams with marshmallows, green bean casserole, five kinds of pies… I could keep going, but you probably get the idea.”
“Hmm, that is very tempting. But are you sure they’d be okay with me showing up unexpectedly?”
“They expect me to bring the perfect boyfriend I’ve been telling them about for weeks. You’ll fit the bill.” She tilted her head and considered. “That reminds me, you’ll have to go by the name Brett, too.”
“Brett?” She was kidding, right? One look at her face told me she wasn’t. I had zero desire to pretend to be some other guy on Christmas Eve, but after getting her fired, how could I possibly say no? I owed her this favor at the very least. “Anything else I should know?”
“Nah, I never told them that much. Just that I was dating a nice, handsome guy.”
I arched an eyebrow. “Hmm, not sure I fit that description.”
“You know you do, pretty boy.” She met my gaze head-on. “Look, after tonight you don’t have to see me again. Once the holidays are over, I’ll tell them we broke up, and we can pretend it never happened. So are you in or out?”
The smart thing to do was to say goodnight and high-tail it back to my car. I wasn’t ready to get involved with any girl, let alone one who turned my insides out with a single look or the slightest touch. But there was something about her that I couldn’t walk away from, not this time.
“All right, I’ll pretend to be your boyfriend tonight…but only if you agree to go on a real date with me later.” 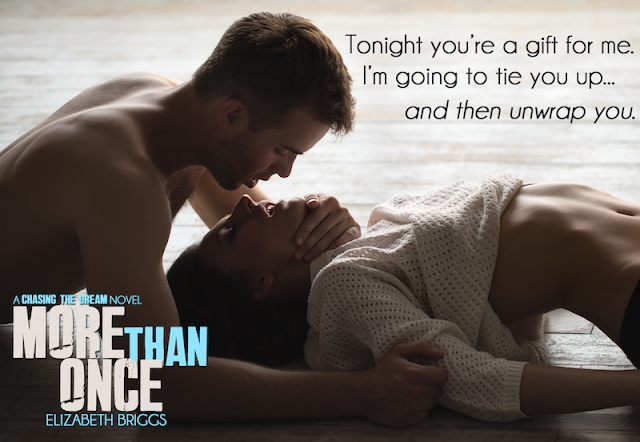 Elizabeth Briggs is a full-time geek who writes books for teens and adults. She graduated from UCLA with a degree in Sociology, currently mentors teens in writing, and volunteers with a dog rescue group. She's the author of the Chasing The Dream romance series and the upcoming young adult novel Future Shock. Elizabeth lives in Los Angeles with her husband and a pack of fluffy dogs.