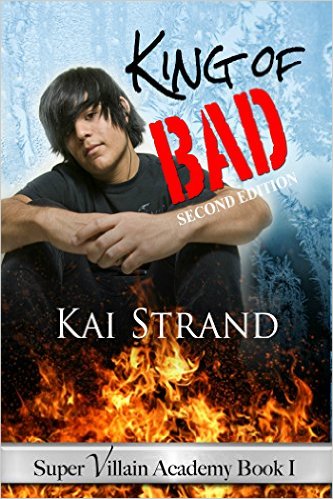 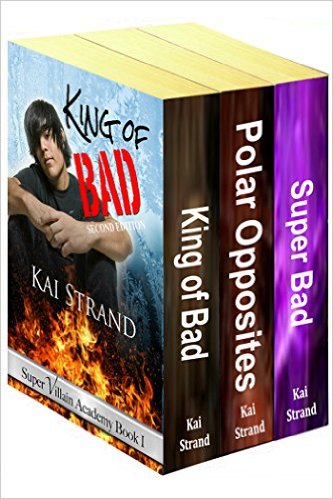 Amazon – http://www.amazon.com/Strands-3-Book-Super-Villain-Academy-ebook/dp/B0153UN1GQ/ref=sr_1_4?s=digital-text&ie=UTF8&qid=1442172111&sr=1-4&keywords=kai+strand
Barnes & Noble – http://www.barnesandnoble.com/w/kai-strands-3-book-box-set-kai-strand/1122625732?ean=2940151181402
Whiskey Creek – http://www.whiskeycreekpress.com/store/index.php?main_page=product_info&products_id=1318
Jeff Mean would rather set fires than follow rules or observe curfew. He wears his bad boy image like a favorite old hoodie; that is until he learns he has superpowers and is recruited by Super Villain Academy – where you learn to be good at being bad. In a school where one kid can evaporate all the water from your body and the girl you hang around with can perform psychic sex in your head, bad takes on a whole new meaning. Jeff wonders if he’s bad enough for SVA. He may never find out. Classmates vilify him when he develops good manners. Then he’s kidnapped by those closest to him and left to wonder who is good and who is bad. His rescue is the climactic episode that balances good and evil in the super world. The catalyst – the girl he’s crushing on. A girlfriend and balancing the Supers is good, right? Or is it…bad?

When her children were young and the electricity winked out, Kai Strand gathered her family around the fireplace and they told stories, one sentence at a time. Her boys were rather fond of the ending, “And then everybody died. The end.” Now an award winning children’s author, Kai crafts fiction for kids and teens to provide an escape hatch from their reality. With a selection of novels for young adult and middle grade readers Kai entertains children of all ages, and their adults. Learn more about Kai and her books on her website, www.kaistrand.com.

Mailing List| Facebook| Twitter| Instagram|
EXCERPT
An alarm blasted, startling the occupants of the room into silence. The double doors burst open, slamming against the walls with an alarming crack. A swarm of people, clad in black from head to toe, poured through the door. Blue flames erupted from those on the outer edge of the group. The flames weren’t directed at the kids in the room, but acted more like a battering ram to clear the way.

Jeff stepped between her and the melee. He saw a panicked look on Source’s face and wished the intruders didn’t separate them. Jeff knew Source’s lack of skill left him vulnerable.

Oceanus stepped around Jeff. “What do you think you’re doing?”

With her eyes sparking, Oceanus didn’t look as helpless as Jeff would like to think she was. Regardless, the need to protect her was strong and he again stepped in front of her. Hoping to distract her, he said, “Uh…you’re more experienced than me and you can help me fight if we need to. Stay back.”

Oceanus glared at him.

“Uh…for now.” He nodded to give his feeble statement strength.

“But I want to see.” Oceanus stepped sideways. “I’ve never seen blue fire before, Polar. What is it?”

“I don’t know, but it looks like they have more tricks up their sleeve.”

The tight knot advanced militarily to the center of the room. Then they unfurled like a flower bud, revealing a deadly stamen. A small woman, with ebony skin and violet eyes, stood in the center, seeming seven feet tall with the importance she emanated.

She spoke in a smoky, low voice to a ferret-like kid. “¿Dónde está, el?”

The ferret pointed and she raised her long nailed hands above her head. Nets, conjured from thin air, shot up and sailed across the room landing over her surprised target.

“No!” Jeff yelled. He lunged forward, his hands instantly aflame, but when he tried to shoot his fire it balled back on him, burning his own hands. He blew ice onto his hands to squelch the burn. Seeing the frost gave him a thought. “Oci, water!”

He pointed to the floor and indicated that he wanted it to snake across the room.

Oceanus pulled water from the overhead sprinklers and dropped it onto the floor. Jeff drew a deep, deep breath and breathed across the surface of the water. It iced over, immediately sending half the blue flame people to the floor. Jeff blew again, refreezing the water over their hands and trapping them.

“It won’t last forever, let’s move.” He grabbed Oceanus’ arm and they ran. They were halfway across the room when roots burst through the floor and wrapped around their ankles. They sprawled face first on the floor. Another kid fell, knee first, onto Jeff’s back, knocking the wind out of him. Jeff squirmed around until he sat up and grew a small controlled fire in his palm. He showered sparks onto the roots that had snaked up around his calves. The roots shrank away from the fire, loosening their hold and Jeff tore free of their viney grip. He did the same for Oceanus and they scrambled to their feet again.

The intruders hefted their squirming captive toward the door.

Jeff anchored his feet firmly on the ground and gathered all the gravity he could feel around him. As quickly as he could, he bound the feet of those carrying the hostage.

“See if water will work on that blue fire, Oci. Before they get to us.”

Oceanus swung around and saw four of the blue flames approaching. She pulled water from the drinking fountains and doused the flames. But instead of putting it out it seemed to increase it. “No good. I think it’s feeding on it!”

Jeff felt light headed from having to split the gravity in so many directions. He imagined his feet were buried in the ground, giving him a deeper contact with the source, and his head cleared a bit.

“Can you smother it somehow?” Jeff yelled.

“No, I don’t have anything. And the others are getting free.

Sure enough the blue flamers who’d been temporarily frozen were up and re-igniting their fire.

One of the intruders with the blue fire yelled, “¡Detenganlo!” and pointed toward Jeff.

Teachers had joined the fight. In the midst of pelting milk cartons, lightning strikes, and lashing ropes, Jeff was struck by one strange fact. His fellow students seemed to be fighting for the sake of fighting. No one appeared intent on retrieving the hostage. As a matter of fact, Jeff watched a kid blast one of the captors and turn away from the hostage.

Jeff roared. He had to get over there, but if he moved, he’d release the gravitational hold he had on the captors. Experimentally, he slid a foot forward without lifting it from the ground. He felt the hold weaken, but it didn’t break. Concentrating all his efforts on maintaining control, Jeff slid his feet across the floor. The going was agonizingly slow. He felt some of the captors struggle against the gravity that locked them in place, hoping to break free. Someone’s psych ability nudged around his head looking for a way in. With all his efforts focused, he continued to slide across the room.

A blast of steam and heat hit Jeff, knocking him sideways. He slid a couple of feet across the ground and came to a rest in a heap. Dazed, he shook his head and sat up. Then he remembered what he’d been doing. He leapt to his feet and searched the room for the group of captors. Too late. The doors swung closed behind them. Source was gone.
The Giveaway
$15 Amazon gift card plus a signed bookmark and a pack of King of Bad playing cards (see attached picture); open US only