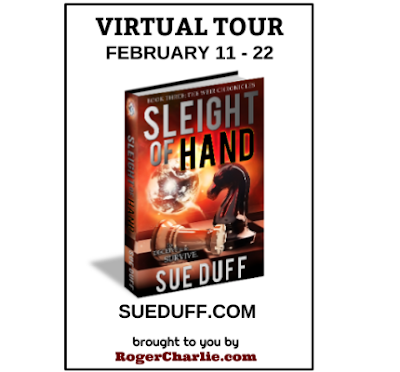 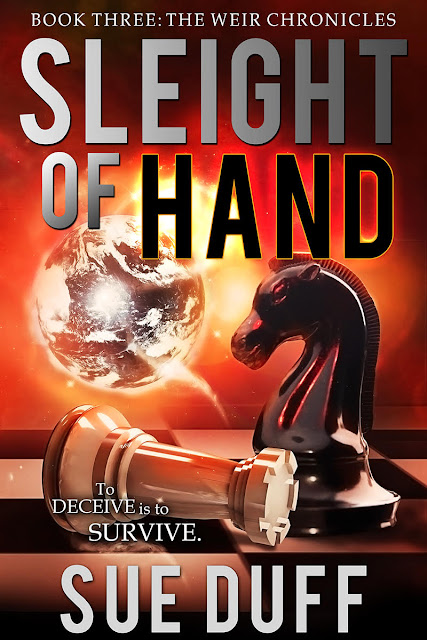 
ASIN: B019BQT00E
$2.99
Urban Fantasy, Paranormal Fantasy, SciFi Adventure
Crosswinds Publishing
January 15, 2016
Pages: 348
As the epic Weir Chronicles continue in this third installment of the series, rebels poison Ian and it’s up to Rayne and Patrick to find a cure before their friend succumbs and Earth’s fate is left in the hands of adversaries intent on taking control of the planet. To obtain answers, Rayne must travel to an alternate world where few survive as Patrick unearths the secrets of the rebels and discovers a truth that shatters his beliefs about the Weir and the future of Earth.

Catch up on the series by reading Fade to Black and Masks and Mirrors !

Want more? Join The Weir Chronicles Fan List for exciting news and updates on special events, giveaways and upcoming books in the series!

Praise for the Series


“A stunning debut with a thrilling mix of sci-fi and fantasy. Duff has a real hit on her hands.” - Roxanne Kade, blogger at Therian
“I recommend this to anyone who loves a good Sci-fi esque, fantasy, dystopian, secret-war-going-on-behind-the-human’s-backs-and-right-under-their-noses sort of book.” -- Jaay V, blogger at Reckless Indulgence
“This is one series that I recommend to readers of fantasy and paranormal romances. You will not be disappointed.” - Jessica Bronder, blogger at J Bronder Book Reviews
From Readers on Amazon


“You may lose sleep. The action is fast paced and it’s refreshing to see a book in this genre with a male protagonist! I truly enjoyed his journey to self-discovery.”
“I love that Sue Duff does not dumb down her writing to make everything repetitious each time - she let’s you figure out the rules yourself while you read. Her style of writing really suits the smart world-building, and I also fell so in love with the characters.”
“A magical tale filled with likeable characters.”
FOR IMMEDIATE RELEASE


DENVER, CO -- January 2016 -- A magical race of beings, the Weir have served as caretakers of Earth for thousands of years. But when they are pitted against each other by outside forces sucking life from the planet, it’s once again up to a young illusionist to come to mother nature’s rescue in the third installment of the Weir Chronicles, Sleight of Hand .
As the epic story continues, main protagonist Ian Black is poisoned by rebels and it’s up to friends Rayne and Patrick to find a cure before he succumbs and Earth’s fate is left in the hands of adversaries intent on taking control of the planet. To save Ian, Rayne must travel to an alternate world few have survived while Patrick unearths the secrets of the rebels to discover a truth that shatters his beliefs about the Weir and the future of their planet.
“We’re midway into the five-book series, so it’s a pivotal turning point in everyone’s lives,” said Duff. “Everything shifts for Ian and the gang.” This game-changing chapter combines fantasy, magic and Duff’s great love of Earth and Space to weave the magical wonders of the universe into the new novel. “Natural sciences play a major role in the Weir - who they are, and what they cherish the most’ and Sleight of Hand finally helps to answer some questions about the Weir from the first two books in the series.
Duff has already begun work on books four and five and even had the opportunity to fact-check her story with NASA scientists when she participated in 2015 Denver ComicCon programming.
“It was intimidating to sit on a panel with them, but they were a kick to hang out with, and even verified that my research was sound for the upcoming novels,” said Duff. “What a relief!”
Out of hundreds of submissions, Duff’s novel Fade to Black placed as a finalist in the Colorado Gold Writing Contest in 2011 and in 2015, her writing earned her the PEN Award from Rocky Mountain Fiction Writers . Additionally, Duff has completed a short story entitled Duo’vr for the anthology TICKTOCK: Seven Tales of Time , which hits store shelves on March 1, 2016. 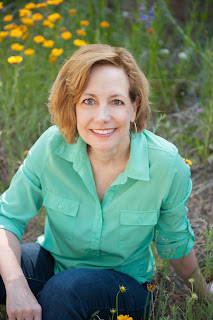 Sue Duff has dreamed of dragons and spaceships before she could even read, so it’s only natural that she now combines both fantasy and science fiction as her favorite genre. Having written since high school, Duff never took it seriously until a skiing accident laid her up for an entire summer and she turned on the word processor to combat the boredom. A couple years later, her first urban fantasy novel, F ade to Black , was one of five finalists in the

She is the second oldest of six girls with an avid reader mom and her dad, the family’s single drop of testosterone in a sea of estrogen.


By day, Duff is a dedicated speech-language therapist at an inner city school district, a career she pursued much in part to her aunt who got her hooked on stories of the profession when Duff was younger. She is passionate about the work she does and regularly works to help those students that need it the most.


Sue is a member of the R ocky Mountain Fiction Writers and T he Pikes Peak Writers.

She calls Colorado home and when not saving the world one page at a time, she can be found walking her great dane, getting her hands dirty in her garden, or creating something delicious in her kitchen.


Check out her blog, A Cook’s Guide to Writing and other musings on her website.