The runner-up prizes are a great selection of ebooks and paperbacks, and you'll also be connected with 21 amazingly talented paranormal romance and urban fantasy authors for great deals, freebies, and giveaways.

I'm including the first novel in The Mythos of Cimme series, THE WATCHER'S DAUGHTER. 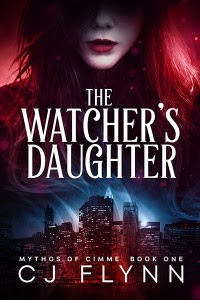 When Allie Stuart begins researching the seedy underworld of supernatural creatures, vampire machinations, and paranormal counterplots, her search engine leads her straight to Nathan Carter and his merry band of conspiracy theorists.

Facing thirty and feeling overwhelmed by her grandfather’s Alzheimer’s, a relationship that is cooling down instead of heating up, and a detour in her research career, the odd ramblings of the ParaLine group offer an amusing distraction. Nathan Carter, however, has other plans for Allie. When he decides to use her as bait in a war against an undead prince, Allie comes face to face with the reality behind Carter’s narrative. The truth, and the family secrets it reveals, will bring more change than she would have ever wished for.

Available on Amazon for just 99¢!


Excerpt from The Watcher's Daughter

I went over the scene again as things began to clear. My grandfather had attacked, his fingers clenched and purposeful. I remembered how that strange calm had fallen upon the room like a heavy blanket. I could remember what my grandfather's hands felt like, cool and dry, softer than should be possible for a man his age, but...nothing else. A flash of fear and then that calm. Something still wasn't right. I halted mid-pace and turned to look at him.

Harding reached out to steady me and shook his head. "Don't be ridiculous, Allie. You bumped your head when you blacked out, but you're going to be fine. You'll be back to normal in no time." His face softened. "I'm sorry I didn't tell you what happened right away, but I really was hoping that bump on your head would let you forget. I know it was scary for you, but nothing out of the ordinary happened. You know how our patients are, and what kinds of things go on here every day. We're trained in handling situations like this. Use a calm voice. Be authoritative but friendly. I was doing my job."

"No, Harding. This was something else." My mind was clearing and suspicion tightened my chest. Something strange had happened, something more than just a calm, but firm tone of voice. I couldn't shake the thought, even though everything Harding said seemed perfectly logical.

"Allie, listen to yourself. What explanation could there possibly be?" Harding rested his hand on my shoulder and gave me the sort of smile I'd give the average crazy person.

The questions rushing through my brain scattered again and I frowned. I had never been so mentally disorganized in my entire life. "I don't know. I've never felt anything like that."

His hand slid down my arm. My thoughts slowed as I traced his face. His cheeks and ears were red, and his breathing seemed quick. A sheen of sweat stood out at his temple.

"You're sweating," I said. My voice rang in my ears and I dropped my gaze from his face.

"It's warm in here, don't you think?" His voice was low and serene.

Thank you, and best of luck in this AWESOME giveaway!