Eliza Dunney:  Welcome to London Housemaid Monthly, Miss Fenna, and thank you for being our subject for this month’s feature. How long have you been in service?

Eliza Dunney:  Did you start out as a housemaid?

Linet Fenna:  No, I was a maid-of-all-work for a small household, starting when I was seventeen. Last year I came to the Guterman’s house as second housemaid.

Eliza Dunney:  Is it your dream to be a housekeeper one day?

Linet Fenna:  Well, if I don’t marry. Not many other choices these days.

Eliza Dunney:  Did you once have different dreams?

Linet Fenna:  She smiles. My early life was anything but traditional. Of course, I can’t speak about it, since my family was a bit, well, unusual.

Eliza Dunney:  What happened to change the course of your life?

Linet Fenna:  Prime Minister Gladstone decided only the British Air Force, the Blockaders, belonged in the skies. Anyone who was known to have an airship was arrested. She shudders.

Eliza Dunney:  Wasn’t anyone who owned an airship an air pirate?

Linet Fenna:  A free trader, more like. Don’t you think taxes on luxury goods are too high?

Eliza Dunney:  You do have a point. Did you have help escaping during the arrests?

Linet Fenna:  No, I’m completely on my own now.

Eliza Dunney:  The sound of chugging can be heard in the air. That sounds like an airship, Miss Fenna.

Linet Fenna:  Yes, I suppose you are correct. Looks wistful. I remember when that was a happy sound.

Eliza Dunney: Do you think the free traders will ever rise again?

Linet Fenna:  The prime minister is an old man. Hopefully the next government will be less restrictive. But Gladstone wiped out a generation of airship captains. When the new captains emerge, they will be young and hungry.

Eliza Dunney:  And handsome, I hope?

Linet Fenna:  She grins. Airship captains? Trust me, they are always handsome, and very sure of themselves!

Eliza Dunney:  Thank you for sitting with us today. I’m sure you must get back to your duties.

Linet Fenna. Oh yes. The first housemaid is ill and the Gutermans have many guests arriving later today for the holidays. I have much to accomplish!

Heather Hiestand is the author of seven novels as well as many novellas and short stories. Her imagination keeps her entertained with romance, mystery and futuristic/fantasy story ideas, many of which eventually become words on a page. She lives in Washington State with her husband and son. For more information, see her website at www.heatherhiestand.com. 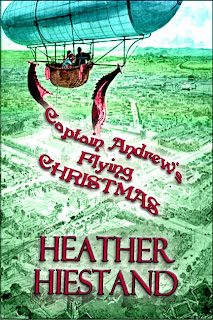 Housemaid Linet Fenna would rather be an air pirate than a servant. When she finds the ladder to an airship dangling outside her garret window on Christmas Eve, 1892, she ascends to the skies above London on her late father’s flagship dirigible, the Christmas. The new captain is someone she never expected to see again, a dangerous, sexy foe. Is the Fenna family nemesis offering Linet her heart’s desire or a dastardly trap? Captain Andrew’s motivations are as foggy as the coal-soaked sky. Prime Minister Gladstone’s Blockaders, a horde of automen and a teenage girl named Hatchet want Linet to fail in her quest to discover what happened to her missing family, but she is determined to have a happy Christmas.

http://www.allromanceebooks.com/product-captainandrew039sflyingchristmas-624819-339.html
Posted by Roxy Kade at 04:00