Meet IN IT TO WIN IT's Grayson Pierce

I am Morgan Kearns; former journalist, current author, and mother of four children to keep things interesting. I write contemporary and paranormal romance.

My second novel, IN IT TO WIN IT, is the story of Sportscaster Jane Alexander and Baseball Bad-Boy Grayson Pierce. 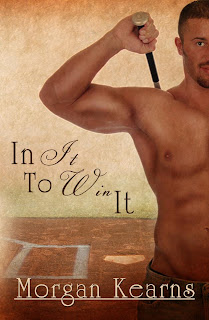 Tabloids love Grayson, and I’ve gotta admit I’m pretty fond of him myself.

Grayson: It’s great to see you, too, Morgan. How are things? You torturing Xavier yet?

MK: Torturing? Is that what you think I do?

MK: I am. He’s an interesting guy.

Grayson: *nods* He needs a good woman who’ll love that chip off his shoulder. Do you know who she is yet.

MK: How are things going between you two?

Grayson: *shakes his head and grins like a fool* She’s good. She’s great. We’re great. Did you know we’re getting married?

MK: I did hear that somewhere.

Grayson: *laughs* Yeah, I’m sure you did.

Grayson: *frowns* It sucks. Last year was brutal. But I don’t have to report for spring training until February so we’re spending every possible second together ‘til then. After that … I don’t want to think about it.

MK: Tell me about the first time you saw Jane after fifteen years.

Grayson: Seeing her was like a two-by-four to the chest. She looked amazing, better than I’d imagined. I didn’t expect her to be standing in the locker room.

MK: She is a sportscaster.

Grayson: Yeah. I know, and I expected she’d be shoving a microphone in my face at some point, but I didn’t expect her to show up when she did. I really threw me for a loop.

MK: You were kind of a jerk to her.

Grayson: *laughs* Kind of? I was a complete and total ass! The stricken look on her face nearly killed me. I wanted to scoop her up in my arms and never let her go. I’m surprised she didn’t slap me silly.

MK: What does the future hold?

Grayson: I don’t know beyond the wedding. I travel a lot. Her job keeps her in Salt Lake. We’re taking things one day at a time. She loves me, that’s all that matters to me. And she’s amazing.

MK: What about kids?

MK: Is that an announcement?

Grayson: *raises brow* You tell me.

MK: *laughs* Touche. Okay, this question is for Liza; Do you have any available friends she could date?

Grayson: *shrugs* A lot of the guys are still single. Would I set them up with someone as sweet as Liza? Probably not. But, if you’re to be believed, and Xavier can be tamed, then anything’s possible. Give me her number, I’ll see what I can do.

Jane sticks her head in.

Jane: Oh, hey, Morgan. I’m sorry to bug you guys, but I need to steal him away. We’re going to be late for the appointment to pick out Save-The-Date cards.

Grayson: *grins* I know it’s cheesy, but I got her diamond earrings.

MK: Not cheesy at all. Diamonds are a girl’s best friend.

Jane and Grayson’s story is IN IT TO WIN IT and can be found on: