Review: The Invitation by Diane Hoh 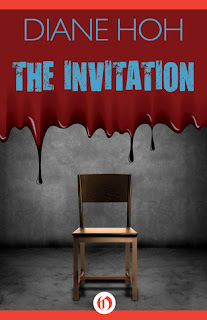 For the high schoolers of Greenhaven, Cass Rockham’s fall party is the social event of the year. Each October, students wait by their mailboxes, praying for the gilt-edged invitation that grants entry into theinner circle of the most popular crowd. And now Cass has planned her finestparty yet, with a new sauna, a hot band, and no parents for miles. But to make this party really killer, Cass tops it all off with a sinister twist.

Nerdy Sarah Drew is shocked when she and her friends receive invitations to Cass’s affair. For years she’s steered clear of the popular kids, and now they want her to come to their party? Sarah is wary, but her friends talk her into coming with them. But she regrets it quickly, for at Cass Rockham’s mansion, the only party favor is death.

The Invitation is an entertaining book that took me back to my high school years, when teen slasher movies were the craze. The plot was a little predictable - a group of friends, a psycho out for revenge and a few strange occurences that keep you guessing who exactly is behind everything that is happening. But there were one or two twists thrown in which really and truly surprised me.

So basically the story is about five very ordinary teens who receive invites to the party of the year. Their excitement at having been invited out-weighs their suspicions, and they go to the party. But once they arrive, it is quite clear that something is not right. Or at least only to the MC, Sarah. The house has a creepy, dim atmosphere and their hostess is a little too happy to see them all, even though she cannot remember their names. Yeah, something is definitely up!

A quick game of muscial chairs singles out each of the five friends and they find themselves becoming the entertainment. Only, this supposedly innocent turn of events soon becomes a deadly game of cat and mouse.

The idea of a "human hunt" was quite interesting, and a fresh idea. It was only once the hunt began that I really got into the book. I love mysteries, and I try to keep track of everyone's movements, hoping to figure out who the culprit is before they are actually revealed, and everytime I thought I knew who it was something would prove me wrong. When the "bad guy" was finally revealed, I felt a little disappointed. The story behind why the person was out for revenge could have been a little more scandalous, and it don't think it warranted the deadly situtations that the characters were thrown into. I mean would someone really go so far off the deep end and try kill people, if faced with the same situation? I just had a very hard time believing it!
This book also has a touch of romance, which I felt could have been left out. It just didn't have a place in the story, and it was almost as if it was added as a filler.

Thank you to Open Road Media for giving me the opportunity to read and review The Invitation.