Immortal Ink Publishing : Four in the Morning by Christi Goddard 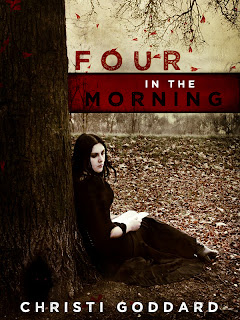 Four In the Morning by Christi Goddard is now available!!

Kathleen Hayson thinks her biggest problem is her mother. The only runner up—her mouth. With a wit sharper than her mother's perfectly manicured nails, her clever remarks create more problems than they solve.

But it's not her clever remarks landing her knee-deep in trouble. This time, Josh Colby is to blame. Kathleen's former childhood friend has become the school's most stuck up jerk. Before, she'd have told him to piss off and write his own stupid letter to the town slut/minister's daughter. Now Kathleen's escalating problems at home force her to reevaluate how flexible her principles are. She agrees to write the controversial letter Josh has requested.

Enter Rigel, a smartass magical creature who invades her room one night, promises he has come to help her. When a boy Kathleen hates turns up dead and her mother goes missing, the letter becomes a key piece of police evidence – implicating Kathleen. As she fights her way out of a web of lies, the trust she has in those closest to her shatters. In the end, she's pushed to a terrible choice: who lives, and who else dies.