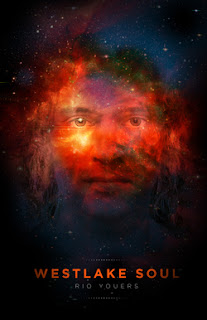 "All superheroes get their powers from somewhere. A radioactive spider bite. A science experiment gone awry. I got mine from a surfing accident in Tofino. The ultimate wipeout. I woke up with the most powerful mind on the planet, but a body like a wet paper bag. . . ."

Meet Westlake Soul, a twenty-three-year-old former surfing champion. A loving son and brother. But if you think he’s just a regular dude, think again; Westlake is in a permanent vegetative state. He can’t move, has no response to stimuli, and can only communicate with Hub, the faithful family dog. And like all superheroes, Westlake has an archenemy: Dr. Quietus—a nightmarish embodiment of Death itself.

Westlake dreams of a normal life—of surfing and loving again. But time is running out; Dr. Quietus is getting closer, and stronger. Can Westlake use his superbrain to recover . . . to slip his enemy’s cold embrace before it’s too late?

When I first read the synopsis for Westlake Soul, I expected a superhero adventure novel with just a touch of seriousness, but what I got was the total opposite. This book is a non-stop emotional whirlwind that ripped through my heart and left me devastated.
WARNING! Prepare to cry your eyes out!!
The story tells of Westlake Soul, a free-spirited surfer whose entire life changes within a split second. An accident that leaves him in a permanent vegetative state, forces him to watch in painful silence as the people he loves are faced with difficult decisions. Unaware of his presence, he pleads with them to not give up on him, but to fight for him because there is nothing he wants more than to truly live again. Dr Quietus, his evil nemesis challenges him each day as he clings to life, but Westlake’s will to survive is stronger than Dr Quietus and he fights with everything he has left. Is it enough, though? The only one who believes in him is his dog, Hubba-Hubba Artful Soul, or Hub as we so affectionately get to know him throughout the book. By some strange occurrence, after the accident, Westlake is able to communicate with Hub, as well as other animals. If only Hub was able to communicate with the rest of the characters in the book, then he’d be able to tell them that Westlake was still around. With the arrival of a new caregiver, Yvette, Westlake’s “life” changes, he feels more alive than he has in months and new hope fills him with the idea that Yvette may truly believe that he is not entirely gone. But, as is reality, some things cannot be fixed, no matter how much we wish them to be, no matter how hard we fight.

Rio Youers’ brilliance in bringing to life the very essence of the human soul is breath-taking. Never have I connected more with a character, especially one who is physically unable to do much of anything throughout the story. All we know if what he feels and experiences within his being. The strength of his spirit and determination to win the fight that is death is beautiful, and my ideas and thoughts of people in his condition will forever be changed.


I was constantly cheering for Westlake, with the hopes that maybe, just maybe, a miracle would bring him back to the world he so desperately wanted to return to. This book is filled with heart-breaking moments as his family struggle with a decision that may very well end Westlake’s torture, as well as their own, bringing with it an entire new level of misery. There is truly nothing I can fault this book on. It was a fantastic read from start to finish, and it haunted me for days after I had finished reading it. Every time I think of this novel, I will be reminded of how precious life is, and how quickly it can be taken away.


Favorite quote : “Everybody thinks he is broken, but he is still intact. And sometimes, if you press your face to the glass, you can see through the cracks -” – Yvette, just after she’s compared Westlake to a cracked window that has to be washed carefully, in case the pieces fall out.


Because of the profound way in which this book affected me, I can give it nothing less than...