WELCOME TO THE FOURTH DAY IN THE MOA WHIRLWIND TOUR!!


Today I will be posting my review of Moa, and tomorrow my review for The Statue of Ku will go up! Enjoy! 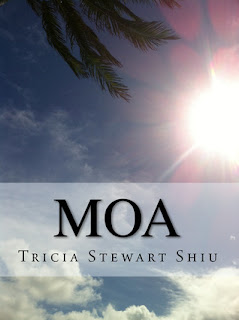 Hillary Hause is not a witch. But, everyone in her conservative small town thinks so. When she is given a trip to Hawaii for graduation, this energetic eighteen-year-old anticipates adventure but gets more than she bargained for when Moa, an ancient Hawaiian spirit, pays her an unexpected visit.

With the help of her older sister, Molly and her seven-year-old niece, Heidi, Hillary embarks on a journey in which she not only saves herself, her family and Moa, but also the Hawaiian Islands. In the end, she learns to accept herself and her spiritual gifts warts and all.

"The word, Anuenue, means Rainbow, for no one but the rainbow truly knows the location to its end."


It took me a very long time to get into this book. In fact, it took me a long time to get through it, yet it was so short ( 80 odd pages ). I can't really pin-point what it was about the story, but I often found myself becoming distracted and my mind would wonder to other things while reading. I even had to think back to parts of the book I had already read, as certain aspects of the story became confusing and it felt like I was trying to put together a puzzle, but the pieces didn't quite fit.

The flow of the story felt a bit rushed. I wish it had slowed down a little at times to make room for more character development. With so much going on in the story I wasn't able to build much of a connection to any of the characters. I liked that the story was told from Moa's POV, it was a nice change from the norm to have the POV change from third person to first person and back again, but with the view always being from the same character. I've never seen any other book written in this way.

The main focus of the book is about the battle for the Ancient Portal, but it is also a spiritual journey of accpetance and self-discovery. The characters are each holding onto something - anger, grief, even guilt - and as they fight their way to save Hawaii and ultimately the rest of the world, they are able to let go of these feelings. Even Moa, who for the most part is there to guide Hillary, Molly and Heidi, has her own inner journey to make. She is stuck in limbo, unable to move through the Portal, working as gatekeeper, but by the end of the book her life had changed and an entire new journey presented itself.

The little details within the story were very interesting, as were the many superstitions and beliefs of the Hawaiian people. The idea felt fresh but for some reason it just didn't deliver. I expected so much more from the story, but in the end it fell flat. It just wasn't for me.

Although there were so many things I couldn't quite get my head into while reading this book, I still believe it deserves some merit for the interesting facts, strange beings and overall uniqueness of the plot.

As part of this special promotional extravaganza sponsored by Novel Publicity, the price of the Moa and Statue of Ku eBook editions have both been dropped to just 99 cents this week. What’s more, by purchasing either of these fantastic books at an incredibly low price, you can enter to win many awesome prizes. The prizes include $600 in Amazon gift cards, a Kindle Fire, and 5 autographed copies of each book. All the info you need to win one of these amazing prizes is RIGHT HERE. Remember, winning is as easy as clicking a button or leaving a blog comment--easy to enter; easy to win! To win the prizes:
About Moa: Eighteen-year-old, Hillary, anticipates adventure as she embarks for trip to Honolulu, but gets more than she bargained for when Moa, an ancient Hawaiian spirit, pays her an unexpected visit. Get it on Amazon.

About Statue of Ku: The second book in the Moa Book Series, "The Statue of Ku" follows Hillary and Moa as they jet to Egypt on the Prince’s private plane to reclaim Moa’s family heirloom, the inimitable statue of Ku. Get it on Amazon.

About the author: Tricia Stewart Shiu combines her addiction to the written word with her avid interest in the healing arts and all things metaphysical in her novels Moa and Statue of Ku and looks forward to finding new ways to unite her two loves. Visit Tricia on her website, Twitter, Facebook, or GoodReads.
Posted by Roxy Kade at 09:27