WELCOME TO DAY FIVE OF THE MOA WHILRWIND TOUR!!

As promised, today I will be reviewing Statue of Ku, the second book in the Moa series! 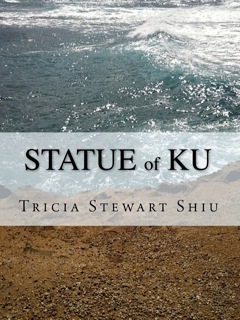 
The second book in the Moa Book Series follows Hillary and Moa as they jet to Egypt on the Prince’s private plane to reclaim Moa’s family heirloom, the inimitable statue of Ku. Once on the ground, however, they find that their search is less about retrieving a treasured family possession and more about tracing a healing path in their genetic lineage to its true beginning. Their journey involves magic, sacrifice and discovering their unique healing gifts, which live within all of us. Their story intertwines with that of the real boy, Ku — his questions, his travails and, eventually, his triumph. In their continuing search for the Statue, Hillary and Moa find that the answer to every question they seek is where they least expect it and that healing gifts are not lost but merely forgotten.

Statue of Ku, the second book in the Moa series was a much more exciting read than the first book. The story was well paced which allowed for an easier read. Continuing from where Moa left off, the adventure moves to Egypt, where Moa, Hillary, Molly and Heidi go in search of the Statue of Ku.
This statue belonged to Moa’s mother and Moa swore to regain possession of it as soon as she returned to her human life.  Although I still wasn’t able to connect with any of the characters from the first book, they felt a bit more solid - better defined. It was fun to see how they handled situations on their new journey, from the issue of Moa’s identification, Hillary’s reaction to the prince, and even the chaos that ensued during their trip to the open market. The latter, in particular, was a fun scene to read and when each character’s gift was exposed, I knew the story had a higher purpose than simple entertainment value. I liked the way Ms. Shiu planted little tidbits of information relating to the first book, as well as Moa’s connection to Ku, and as the story came to a close all the puzzle pieces (those that didn’t quite fit together while I read Moa) finally merged, revealing the mystery of Ku and his healing powers.
Ku was an amazing character and I loved reading about his life’s journey. He faced so much adversity from such a young age, but he always held his head high. He was brave and compassionate no matter what came his way. My heart went out to him when Meep was taken, and when he lost Am. I rejoiced when he finally found a new family, who took care of him and released him from his hardships, even if for only a little while. The final step in his journey handed him love, deservedly so, and there was a beautiful sense of completion to his trek, when Hueneme tells him about her experience in the Great Pyramid.
This book was filled with as many interesting beings as Moa, and I loved that this book took place in Egypt, with its rich sense of history and culture. My previous thoughts of this series have certainly been changed. I can only wonder what else is in store for Moa and her friends as the series continues.
Statue of Ku gets.....

As part of this special promotional extravaganza sponsored by Novel Publicity, the price of the Moa and Statue of Ku eBook editions have both been dropped to just 99 cents this week. What’s more, by purchasing either of these fantastic books at an incredibly low price, you can enter to win many awesome prizes. The prizes include $600 in Amazon gift cards, a Kindle Fire, and 5 autographed copies of each book. All the info you need to win one of these amazing prizes is RIGHT HERE. Remember, winning is as easy as clicking a button or leaving a blog comment--easy to enter; easy to win! To win the prizes:
About Moa: Eighteen-year-old, Hillary, anticipates adventure as she embarks for trip to Honolulu, but gets more than she bargained for when Moa, an ancient Hawaiian spirit, pays her an unexpected visit. Get it on Amazon.

About Statue of Ku: The second book in the Moa Book Series, "The Statue of Ku" follows Hillary and Moa as they jet to Egypt on the Prince’s private plane to reclaim Moa’s family heirloom, the inimitable statue of Ku. Get it on Amazon.

About the author: Tricia Stewart Shiu combines her addiction to the written word with her avid interest in the healing arts and all things metaphysical in her novels Moa and Statue of Ku and looks forward to finding new ways to unite her two loves. Visit Tricia on her website, Twitter, Facebook, or GoodReads.
Posted by Roxy Kade at 10:11