Welcome to my second stop on the Exiled Book Tour! As promised, J.R. is here today for an interview, so let's get right to it :)

J. R. Wagner was born on January 20th, 1978 in West Chester, Pennsylvania during a blizzard.  The snow made travel by car impossible so his father, Robert (Bob) called an ambulance when his mother, Dianne went into labor.  The ambulance became stuck at the bottom of Wagner’s driveway prompting the dispatch of a fire truck, which towed the ambulance, Dianne, still with child, and Bob to the hospital where Joshua was born. 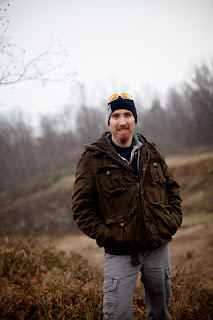 Joshua’s mother was diagnosed with ovarian cancer in 1997.  She died less than a year later.  Joshua was 19.
Joshua’s father was a small business owner in Downingtown, Pennsylvania.  With nothing more than an idea, tenacity and the love of a great woman, he rose from poverty and grew his business into a multi-million dollar flooring company still in business today.  Bob died in 2009 leaving his company and his legacy to his children.
Wagner attended Pickering Valley Elementary School then Lionville Junior High School before graduating from Downingtown High School (now known as Downingtown West).  He began writing at a young age.  When he was ten, he wrote a sequel to Return of The Jedi and had lofty aspirations of working with George Lucas on filming the project.  Other writing and film projects followed.  In 1990 Wagner began filming his version of The Lord of The Rings in his parent’s basement but the plug was pulled after he nearly burned down the house with the torches he’d created.  Since then he’s written a full-length science fiction screenplay, a thriller Novel and a second screenplay (which Wagner is still determined to film himself). None have been published.
Taking a 180 degree turn in his career path, Wagner went to college and earned his bachelor of science in Kinesiology from Arizona State University.  During that time, Wagner’s creative endeavors were supplanted by studying, sports and girls.
In 2001, Wagner returned to Downingtown, where his creative fires were re-stoked.  He married and fathered two beautiful daughters, Iris and Sydney.  Wagner divorced shortly after Sydney’s birth.

Not long after meeting Lisa Stojowski, Wagner fell in love.  During a trip to Maine together, Wagner began writing Exiled.  He completed the first draft in the fall of 2010.  Lisa and Joshua married in June of 2011. Wagner endearingly considers his wife, his muse, his facilitator, his solid ground.  Exiled is currently in the ‘editorial washer’ and is scheduled to release June 5,  2012.

I live in Pennsylvania with my wife and two daughters.  We have two dogs, a German Shepherd (Sorin) and a Carin Terrier (Corky) and one cat (Merlin).

2.     How would you describe yourself in three words?

I can usually be found outside –either working on the landscaping (I have big dreams), riding my bike or running.

4.     What five things do you never leave home without?

My clothes, my glasses, my phone, my sense of purpose and a comfortable pair of shoes.

5.     Who/What inspired you to write your first novel?

I’d been writing different stories nearly my entire life.  I’d recently returned to Pennsylvania from Arizona and was searching for focus in my life.  That’s when this thing called creativity, which has been poking at my subconscious for some time, finally reared its head and I decided to do something about it.

6.     What has been your most rewarding experience on the road to being published?

Meeting the amazing people along the way.  I’ve spoken for several troubled teen groups who helped me realize how much writing and reading can impact lives if presented in the right light.

7.     What is the best piece of advice you have been given as an author?

8.     What advice would you give aspiring authors?

Write every day (didn’t see that one coming, did ya’?) If you haven’t created a blog, make one. Build an online following.  Check out figment.com –don’t be afraid to show your work to others, it’s the only way you’ll learn how to improve.

Patrick Ness, Tolkien, Rowling, King, Greer, and so many others.

10.  How did you come up with the idea for Exiled?

Exiled evolved from a single scene –the opening scene, actually.  I let this scene grow and develop into The Never Chronicles.  I didn’t ‘come up’ with the idea one day –it grew from the progression of the story. I let the story take me where it wants to go; I’m just along for the ride.

11.   Are any of your characters based on someone you know?

None are specifically based upon one person I know.  There are traits that many of the characters share with people in my life as well as people who have, as Gandalf would say have not met their end but… “End? No, the journey doesn't end here. Death is just another path... One that we all must take. The grey rain-curtain of this world rolls back, and all turns to silver glass... And then you see it. White shores... and beyond, a far green country under a swift sunrise.

12.  Who is your favorite character, and why?

Akil Karanis.  He is shrouded in mystery and very misunderstood (even by me), which makes him intriguing.  I’ve always wanted a mentor –a father figure to offer guidance throughout my life and I believe that needy part of me had a role in creating Akil.

13.  Which chapter was the most enjoyable/memorable to write, and why?

The final chapter in book one. We finally get to see a bit of Akil in action and we get a taste of what’s to come.  There are also hints of some rather disturbing turns of events… if you look for them.

14. When can we expect the second book in The Never Chronicles to be released?
Hopefully this time next year.

Thank you so much for taking the time to stop by my blog, J.R. And thank you for all the wonderful advice for those aspiring authors! I wish you everything of the best with The Never Chronicles and I really can't wait for the second book to be released!!
So everyone, if you'd like to get your hands on a copy of Exiled check out the following links:
Chester County Book & Music Co.
Barnes & Noble
Amazon
Posted by Roxy Kade at 01:41