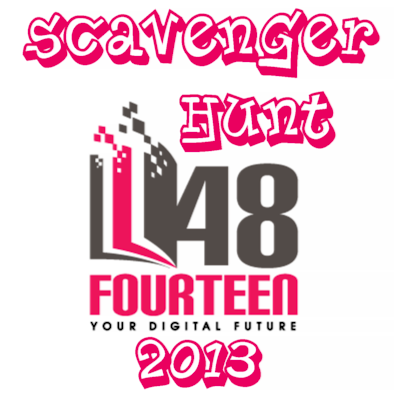 Hello everyone!!
Welcome to my stop on the 48fourteen Scavenger Hunt 2013.

Don't forget to find the highlighted clue...
Here's a hint: Read the excerpt
For more details about the hunt, how to enter and prizes to be won go to the HOMEPAGE.


I have the great honor of hosting the remarkably talented Denise DeSio today! 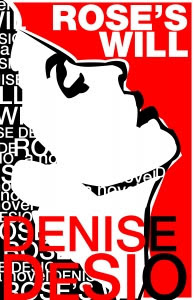 SYNOPSIS
When it comes to unconditional love, Italian matriarch, Rose D'Orsi is deeply challenged. Nobody feels it more than Glory, her estranged 48-year-old lesbian daughter. Though Rose attracts the attention of Eli Fineman, a rich Bulgarian Holocaust survivor whose love, compassion, and wit affects people in unimaginable ways, he arrives too late in life to teach Rose how to be a good mother, even to Ricky, the child she favors.

When Rose gets a terminal illness, Ricky is stretched beyond his limits, juggling a blue-collar job, a family, and his mother’s unreasonable demands. Glory adds to the problem when she returns to Brooklyn to enlist her brother in a comically poignant effort to make peace with her abusive mother. Caught between two strong women, Ricky capitulates to his sister and there’s hell to pay until Rose’s unfortunate death, which sets off a sequence of events that causes the siblings to question their life choices and each other.

Sometimes it takes a personal tragedy to look within, but when Rose's will clouds everyone's judgment, it takes a bold act and a devastating catastrophe to elevate the human spirit.


Praise for Denise DeSio and Rose's Will

“It will affect you deeply, make you laugh, and break your heart.”
~ Kelly Hitchcock, Author of The Redheaded Stepchild

Excerpt from Rose's Will

Rose came to the Senior Center often. Each day I would take a seat by the window so I would be the first to see her, but when she came through the door, I would change my face to look surprised. It took many months for the two of us to become familiar, using Rose’s definition of familiarity: the freedom to call anyone, for any reason, an idiot or worse.

After she called me an idiot — and much worse — quite a few times, I asked her to lunch. She said no. When she finally said yes, I went home and changed into my one-hundred-twenty dollar pants and a forty-five dollar shirt. I walked two blocks to get from my apartment to her house on Avenue P and East 10th Street and rang the doorbell. She did not invite me in. I took her to eat Shish Kabob at the Greek restaurant on King’s Highway, and to make conversation, I told her how much I had paid for my clothes. I was trying to impress her.

“Forty-five dollars for a shirt?” she said, her teeth buried in a chunk of slightly overcooked lamb. I was afraid she would swallow the wooden stick. “Aw, that’s moronic. You don’t know how to shop. I could get that shirt for ten dollars.”

“Really? You should take me shopping sometime.”

She smiled at me then, and her dark eyes brightened into shining half moons. “Okay, I’ll take ya next week,” she said, and she didn’t call me names for the rest of the evening.

After our shopping excursion, I took Rose to lunch almost every day for the next six months. The first time I asked her out to dinner, she said no. When she finally said yes, I took her to an expensive restaurant on Ocean Parkway. She looked at the menu for a long time. I said, “What’s the matter, Rose? Do you not see something you like?

She wrinkled her nose. “The prices are ridiculous!”
I reached across the table and patted her hand. “Rose,” (I loved to say her name) “I am a rich man. Ignore the prices. I want you to order anything you want, anything at all.” I was determined to impress her.

“But it’s twenty-six dollars for a strip steak. I could make us both rib eyes for six-fifty.”

“Well then, you must invite me to your house for dinner," I said, hoping to prepare her for the next stage of our relationship. "For now, pick something. If you like the steak, order it.”

She said, “Nah, I’m not that hungry. I’ll just have an appetizer.”

She ordered the appetizer and I ordered the steak. When the food came, she ate everything on my plate. I ate the appetizer. After that, I didn’t take her to the restaurant on Ocean Parkway unless it was a special occasion.

On one particular afternoon, I took Rose to lunch at the Jewish deli. By that time we were extremely familiar,  Rose’s kind of familiar, which made it acceptable for her to buy clothes for me – with my money and without my presence. Rose and I stood in front of the deli case at Adelman’s, and after I decided in favor of the herring with cream sauce instead of a pastrami sandwich, I pointed to some of my favorite foods and asked Rose, “Do you like kreplach? Do you like latkes?”  After I had made many suggestions, she said in a loud voice, “Boy oh boy! You like all that Jew food, huh?”

“Rose,” I said. “Please. Have some respect.” It was the first time I ever said anything like this to her.

The customers twisted their heads to look at us. “Rose,” I whispered, “I want you to be quiet or I am going to leave you here by yourself.”

She put one hand on her ample hip. “You think I don’t know how to get home? You’re an idiot. Go ahead, you wanna leave? Leave.”

Lenny, behind the counter, shook his head, and I gave up our spot to the next person in line. “Rose,” I put a trembling hand on her forearm. “Please stop it. I am asking you for the last time.” My voice was below a whisper.

I didn’t want to leave her there, but I did. There are some things a man should not have to put up with, even for love. 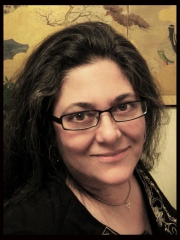 Denise DeSio was born and raised in Brooklyn, New York and graduated from Brooklyn College with a BA in education and a full Masters course in English Literature. She is a member of the Arizona Author's Association and the recipient of the notable Soroptimist Award for her essay writing. She's been published as an anonymous contributor in several publications, but she is most widely known for her true, unpublished, hilarious, adventures documented for the sole purpose of entertaining her friends, who have forwarded them to an exponential number of their friends (some as far away as China).

Denise has been the author, under a pen name, of a sassy, no-nonsense yet progressive, advice column for a local monthly newsletter since 2004, and she is currently working on a compilation of true tales called .

Denise has two wonderful grown children in their thirties that have miraculously survived what a friend has recently described as "the storm that is Denise". She moved from New York to Phoenix with her life partner in 1993, but she still considers herself a New Yorker. Rose's Will is her debut novel, in response to the relentless badgering of those who believed in her.

Like me on Facebook! http://facebook.com/ReadMyBooks
Tweet to me at @Topbee
Blog me at http://DeniseDeSio.com
Goodreads
Continue hunting and remember to return to the homepage to enter!