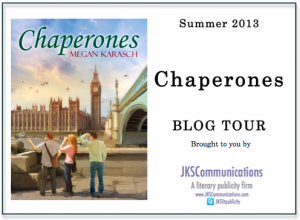 Welcome to my first stop on the Chaperones Blog Tour brought to you by JKSCommunications.

Check out my review below, and stop by tomorrow as author Megan Karasch gives us her take
on self-publishing. 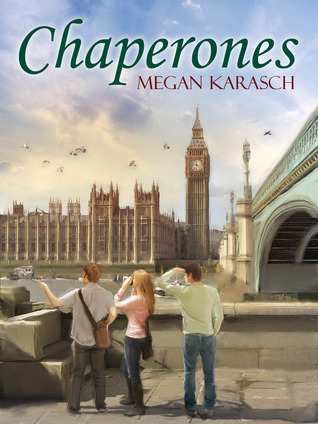 For Andrea Lieberman, life began at 26. Growing up with parents so protective they made a convent seem like a Sandal’s resort, she developed a catalog of phobias so large, even going into a church seemed risky business. Finally, Andrea had had enough; she wanted to live rather than fear dying. Without hesitation, she accepts a photography assignment for a magazine traveling through England and packs up her camera, her pepper spray and every insecurity she accumulated since birth. Excited but petrified to reveal the news to her boyfriend, he intercepts with news of his own – a marriage proposal, leaving the lingering question of their impending nuptials as she travels abroad.

Upon touching down in England, Andrea flops around like a fish out of water. The magazine’s staff – the idiot, the slut, and the mute – offer little comfort outside of a pint of beer until she’s assigned two blokes as travel companions – a tight-arsed copywriter and a drop-dead gorgeous art director with movie star charm. These two men help Andrea push herself beyond her comfort zone while testing the limits of her fortitude and her relationship with her boyfriend. The photographic journey becomes a comedy of errors thanks to unforeseen obstacles at every turn. As Andrea struggles to complete the assignment, she discovers the most revealing picture she develops will be of herself.

This was a wonderfully fun and light read. Andrea had me in stitches with her weird, obsessive and over-the-top fears. I particularly enjoyed her "bobblebody" walk home one night and the way she described keeping kidnappers at bay. Overall, I felt sorry for the girl. She was kind of like bubble boy, with crazy, paranoid parents. Her boyfriend didn't help things. He was just as protective and overbearing. No wonder she ran as far away as she could.

I loved seeing England through Andrea's eyes. I've always thought of it as a country rich in history, and to get a glimpse at some of the beautiful architecture that has been around for centuries was amazing. Although it wasn't always easy for Andrea to navigate this foreign land, let alone the mother-tongue. The differences between American and British culture were highlighted through the book and gave it a hilarious twist.

This story contained many interesting and quirky characters. From the strange girls at the Adventure London office, to Rob and Harry. I didn't find it a little strange that these two guys popped up out of the blue. There had been no mention of them and suddenly there they were to chaperone her on her trip around England. It also struck me as odd that Andrea's mother was so cheerful when Andrea called her from the airport after a mild panic attack. Annie was worse than her daughter and she'd been so distraught with the news of her leaving, so why the sudden change?

And then, everything fell into place, blind-siding me and sending me into another fit of giggles. I mean who would have thought...Harry??? Really?? It was just to brilliant, and too good to be true.

It was great to watch Andrea grow with each independent step she took. She was no longer bogged down by her parents and Brandon, therefore forced to stand on her own two feet and make her own conclusions about just how scary the world was. I was glad that she stood up for herself when it was necessary. It showed just how much she had grown.

I loved the ending to this story. It proved that sometimes you have to let go of everything you know, all your comforts, in order to find yourself, which in turn will allow you to clearly see just how important those comforts are to you. 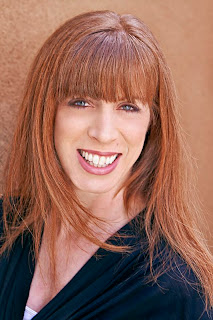 Megan Karasch was born and raised in Los Angeles, California. After college, she worked in a creative capacity assisting with the production of stories for a nationally televised entertainment news program. Following her television stint, she went to law school in Southern California where she earned her J.D. For almost two years, commencing in 2007, while the analytical side of her brain was hard at work in the law, she exercised the creative side writing for a popular Los Angeles lifestyle online magazine, writing music reviews and special interest pieces.

Currently, both halves of her brain remain active while she continues to practice law and has begun what she hopes is a prosperous and rewarding life using the written word to enlighten and enliven. Megan lives in Southern California with her cat, Squeaker, and spends her time reading, socializing with her friends and family and playing drums for a local indie rock band.