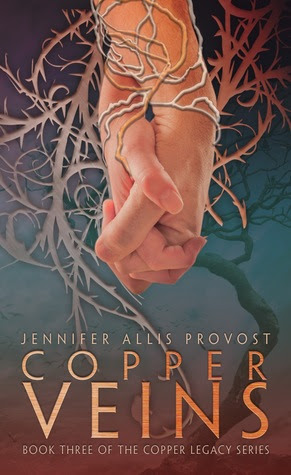 
Sara’s pretty sure her life is perfect.
Not only are she and Micah finally married, her father, who’d been missing since the Magic Wars, has been found. Actually, he just strode up to the manor’s front door, but whatever. Sara knows better than to look a gift horse in the mouth.
But Baudoin Corbeau isn’t content to return to family life. He’s decided that he will be the force of change in the Mundane world, and lead the Elemental resistance to victory with his children at his side. What’s worse, Baudoin doesn’t approve of Sara’s marriage, and makes every attempt to separate her from Micah.
After a visit to the Mundane realm leaves Sara, Max and Sadie imprisoned by the Peacekeepers, Sara’s doubts creep to the surface. Is her father right? Does she belong in the Mundane realm, not the Otherworld? Is Micah really the right man–make that elf–for her?
Was marrying him a mistake?

EXCERPT
We walked all the way back to the manor instead of traveling by the much faster metal pathways. While he didn’t say as much, I understood that Micah wanted the extra time to clear his head, and I was content to while away the rest of the morning with him. “I’m still a bit… grumpy about being cheated out of our wedding night,” I muttered as we walked.
“Grumpy?” Micah repeated. We’d stopped beside a stream to relax and splash some cool water on our faces. “That is not quite the word I would have chosen.”
“Really?” I’d found a stubby branch, and was doodling in the mud while I sat on a rock, my back to the water. “And what word would you choose, General Silverstrand?”
“Hush. I have not ﬁlled that role for a long, long time.” He leaned over and nuzzled the soft spot behind my ear. “Lonely. Bereft. Frustrated. Unmarried.”
“Micah, it’s only been one night.”
“Yes, but until our marriage is consummated, we are not as one. The ofﬁciant said as much during our ritual.”
I recalled the actual words of the ceremony—at the time, I’d been too elated to dissect their meaning, but Corporal Rawson had said, “And once you know her as your wife, you are forever joined as one.” I hadn’t realized that that was what they meant, but I suppose it made sense. At least it was an easier requirement than babies.
“Are all marriages like that?” I asked. I felt Micah’s mouth curl into a smile.
“I don’t know. I have only been married once.” He nipped at my ear and added, “As for this marriage, I know that I must lie with you to seal our vows.”
“Well,” I murmured, stretching my neck for more kisses, “I guess we’d better get on that.”
“I agree.” Micah leaned forward to kiss me on the mouth, but he halted when he saw the result of my mud doodles. I had stabbed and slashed at the ground until it looked like a rabid buffalo had churned up the soil. “Sara, what is troubling you?”
Normally, I would have denied any troubles in favor of more kissing, but that’s pretty hard to do when the evidence is right in front of you. “Do… do you think it’s weird that Dad just showed up? I mean, we’ve been looking for him forever, and he just walks right up to the front door?”
Micah pursed his lips, taking a deep breath before he replied. “Weird? Perhaps. However, your father’s return is an unprecedented turn of good fortune. And on our wedding day, no less.”
“I love it when you say that.”
“What?”
“‘Our wedding day.’”
Micah took the stick from me and pulled me to my feet. “Soon, I will be telling you about our wedding night.” He tossed the stick into the stream and tugged me back toward the road and the manor. “Come, my love, my wife, and let me bring you home.”


Jennifer Allis Provost writes books about faeries, orcs and elves. Zombies too. She grew up in the wilds of Western Massachusetts and had read every book in the local library by age twelve. (It was a small library). An early love of mythology and folklore led to her epic fantasy series, The Chronicles of Parthalan, and her day job as a cubicle monkey helped shape her urban fantasy, Copper Girl. When she’s not writing about things that go bump in the night (and sometimes during the day) she’s working on her MFA in Creative Nonfiction.