Book Blitz: Excerpt + #Giveaway: Roman Rescue: Who Will Save The Hero? by Michelle Gilliam 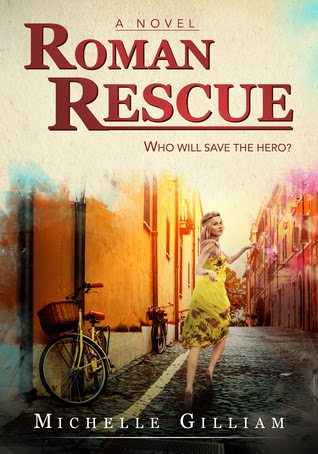 
Maggie has always been a sassy, headstrong Southern girl. But running off to Rome, Italy on summer break from college is the most impulsive thing she’s ever done. Her brother is in trouble, and she’s determined to rescue him- after all, he’s the older, wiser, military officer who has never needed her help before. Paul is in a mess with an Italian ex-girlfriend who has cut ties with him…but is pregnant with his child. Maggie thinks she can fix it.
After all, a break from her life would be nice, too. She just broke up with her long time boyfriend, and her estranged mother keeps hopelessly trying to reconnect with her. Italy sounds like the perfect refuge. Until she meets Paul’s best friend, Marine Sargeant, Luke Seager. He complicates things in every way. He persists to play tour guide and asserts his way into her plans at every chance. Maggie prefers to become a hero on her own, but as she digs into the truth about Paul’s predicament, danger builds around them. While the tension and mystery grows, so do her feelings for Luke- a man with his own shrouded past.
Nothing is as it seems when Maggie gets more than she bargained for with the girlfriend’s mafia ties, Luke’s dangerous connections, and unexpected guests from home. Finding out the truth lands Maggie in more trouble than she can escape. Who will save the hero now?
Look what People are saying about Roman Rescue: Who Will Save The Hero?

Goodreads / Amazon
EXCERPT
I strolled further down until I found a pizza place and dove in for a slice of basil, mozzarella, and sausage. I ordered a Coke, but it came at room temperature, so I changed it to water instead. But, pizza and water weren’t the right combinations. Maybe I tasted the tomatoes more, or the sauce’s bright red color made it look too eerie. Again, I blamed it on Fear whispering warnings of stares from unsmiling eyes. Wasn’t Rome the city of romance? Then why did I see figures in the shadows, taxi drivers with guns, and blood in the pizza sauce?
On the way home, I tried to ignore the shadowed alleys and drivers staring me down as they passed by. I double-checked that my debit card hadn’t fallen out of my bra. It was still there, safe from thieves.
The night air, fruity and moist, smelled unlike the air back home. I walked, taking deep breaths with my nose to the sky. Going through the park, a breeze whipped by, causing me to imagine the world before cars, a time when the Roman statues were real. I could see it. I could see me in it, wearing a long tunic. What did Dr. Francisco call it in English class? A stola, yes. I would look good in a stola, gold chains strapped around me. I imagined the horse dung in the streets and stopped romanticizing. I wouldn’t call it pessimism but realism. Life had taught me not to believe in the wonderful, magical, or romantic. Not that I hadn’t tried.
I pulled the key out of my bra and entered the apartment. I glanced around for a television and spotted the floating stairs. At the top of the stairs was Kayla’s and Luke’s bedroom, tidy and simple with a triple-tier shelving of masculine books: Shooter, Abraham Lincoln, and various spy novels. I also found a TV. I smiled and threw myself into a chair after emptying the clothes from it.
That is where Luke found me, asleep in his bedroom chair. His wide shoulders and his body blocked out the light. It alarmed me. Only a dark sketch of him stood there, looking down at me.
“According to this note, you must be Maggie.”
“Please, tell me your name is Luke, so I won’t have to kill you,” I managed to get out while stretching my arms and rubbing my eyes, barely awake—barely thinking—but not afraid.
“Yep, you’re Maggie. I’ve heard of your quipped tongue.”
I sighed. “Great, my reputation has preceded me all the way to Italy. At nineteen, I’m not sure that’s a good thing.”
“Nineteen, just a baby.”
That riled me. When I should have asked to stay on his couch, I couldn’t. I stood. “I’m not a baby.” I squinted at his dark silhouette and tried to look him straight in the eyes. I stood on my tippy-toes, but his eyes were still inches away, taller and higher, out of my reach. “Well, damn, are you six-four, or what?”
“Maybe six-three,” he said with pride.
I composed myself after a thick swallow. “Must be hard to be that tall.”
“Sometimes.” His insecurity showed. His voice wavered or his shoulders dropped; it was so subtle and so quick. I don’t know, I could just tell.
I took the clothes from the bed and put them back on the chair.
“You don’t have to mess with that.”
“I moved them; I’ll return them. What time is it?”
“Twelve-thirty.”
I took a deep breath, walked over to the top of the stairs, and looked back. That’s when I noticed Luke’s face: soft reddish-tan complexion and pool-water blue eyes. I paused, wordless for too long. 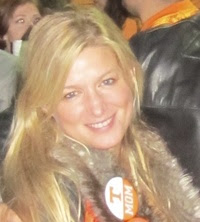 Michelle Gilliam, BSN lives in Tennessee with her husband and three sons, two of which are college football players. She was raised by a southern mother and a British father and her accent is quite a mess with California, Florida, and Texas influences. She loves to read, analyze, and create. But all of that comes after a good cup of coffee and a conversation with a close friend or while treating her patients. That and her dreams are the source of her stories. She first began writing poetry and it is apparent when you see the use of descriptive launguage as she paints rooms, international settings, and people.