Blog Tour: Skating On The Edge by Joelle Charbonneau 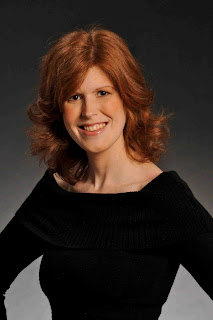 One of the hardest working authors of today, Joelle Charbonneau will have
had seven books published by established publishing houses within just three
years.

She’s the author of two adult mystery series: The Rebecca Robbins mysteries (her latest, Skating on the Edge, releasing Oct. 2 from Minotaur Books) and the new Glee Club mystery series (Murder for Choir, July 3, Berkley Books). Charbonneau launches the first of her Graduation Day young adult trilogy in May 2013 from Houghton Mifflin Harcourt Children’s. Early readers are calling The Testing a mix between the high school ACT and The Hunger Games.

A storyteller at heart, Charbonneau has performed in a variety of opera and musical theatre productions across Chicagoland. In addition to her stage work, she has also performed with several bands and worked as a solo performer. She now teaches private voice lessons and uses her stage experience to create compelling characters in her books. She also gives lectures about surviving rejection in the entertainment industry.

Charbonneau earned her bachelor’s in vocal performance at Millikin University in Decatur, Illinois, and went on to DePaul University for her master’s in opera performance. The mother of a toddler, she hardly ever sleeps. And when she’s not writing, she’s either signing, cooking or watching sports.

Author blog: Do Some Damage and The Stiletto Gang.


I always love to find out how an author started out or what obstacles they had to overcome before being published. Aspiring authors are always looking for advice and some kind of guidelines to navigate this tough industry, so I am honored to have Joelle here today to share a bit about her journey.

Up, down and loop-da-loop.  The publishing rollercoaster ride.

The first time I sat down at my computer to type the opening of a novel, I never dreamed I’d attempt to publish it.  I‘d always been a reader, not a writer.  The decision to write was one of impulse.  An idea for an opening line popped into my head and wouldn’t go away.  So, I wrote it down.  Then I wrote the next line.  In between doing eight shows a week at the theater, I typed.  Day after day.  The pages added up.  Soon I had 100.  Then 200 and the number kept climbing.  Finally, months after I began the adventure, I typed THE END!

I had scaled the proverbial mountain, come down the other side and felt fabulous about the effort.  Was it the best book in the world?  Hell no.  In fact, I would say it was a not so great book.  No one should read that book.  Trust me.  But the lack of greatness did not detract from the accomplishment.  I had taken the roller coaster up the hill and ridden it down in triumph. Wheeee!

Of course, now that I had done that, I wanted to do it again and this time I hoped to write something the reading public might enjoy.  So, I climbed back on the roller coaster, strapped myself in and once again started the climb. Wheeee!


I went up and down the hill 5 times before I received an offer of representation from an agent.  Each climb went a little faster.  A little smoother.  Was more exciting on the way down because I had begun to understand the business of publishing.  I understood how great an accomplishment it was to get to THE END.  I was also submitting and receiving rejections, but hearing “no thanks” from publishers and agents didn’t bother me all that much.  They were just bumps along the way.  Part of the ride I had come to understand.

Once my agent signed me, the ride changed.  The submission process became a much taller hill and the rejection drops more stomach wrenching.  Then a publisher offered us a contract and the hills and valleys grew even taller and someone added a few loop-da-loops into the mix.  Revisions.  Reviews.  Praise and pans.  Nail-biting while hoping that someone at the publishing house believed in the series enough to offer another contract and keep it going.

Thankfully, they did.  And other publishers offered to let me take their roller coaster for a spin.  None of it has been easy.  All of it has involved terror, hand wringing and the hope you arrive safely back in the station.

I thought I understood what the ride looked like when I climbed onto it.  I was wrong.  SKATING ON THE EDGE marks the 4th book I have had published in just over 2 years.  The one thing I have learned is that when I think I know how the ride is going to go, someone throws a loop into the mix.  With each book the hill to create each book gets higher.  The triumph after getting to the end is greater and the rest of the ride—well, I keep getting on the coaster because I’m dying to see how the ride will go.


Praise for SKATING OVER THE LINE


“Rebecca is a spunky, independent heroine. . . . [She] and the quirky secondary characters will appeal to Evanovich fans.”—Booklist


“A visit to Indian Falls is time superbly spent. Filled with delightful citizens, including
grandfather Pop, an Elvis impersonator and hugely warm character, this loving close-knit

community embraces you from the first page. Joelle Charbonneau has a fresh and lively and insightful voice, and she has created characters we’d love as friends. This is a wonderfully fun read.”—Louise Penny, New York Times bestselling author of A Trick of the Light


It’s Native American Summer Days in Indian Falls, and Rebecca Robbins is roped into taking a turn in the Senior Center dunk tank. That is, until her rhinestone-studded grandfather Pop needs help setting up his Elvis act. Minutes from climbing into the tank, Rebecca has to find a replacement. Roller derby girl Sherlene-n-Mean takes her place, and is promptly electrocuted and killed. It’s obvious to the police and Rebecca that this was no accident, and no one knows who the murderer’s intended target was.
With Pop cheering her on and aided by a trio of self-appointed bodyguard derby girls, Rebecca digs for answers, dodges bullets, and races to find a killer.

Author Joelle Charbonneau has worked as a professional singer and actress, and is currently a private voice instructor. Her mother was a national and world champion roller-skater. Joelle lives with her husband and toddler son in Illinois. 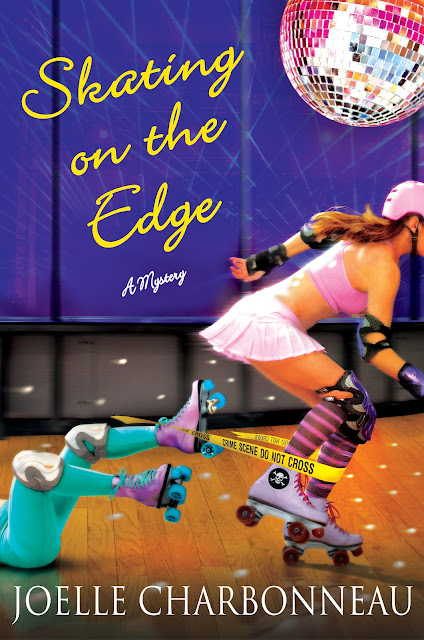 ( I received a copy of Skating on the Edge via JKS Communications for an honest, unbiased review. )

Let me start off by admitting that I haven't read the first two books in this series, but after having read Skating on the Edge, I most certainly will make a point of reading them!


Wow! This was such a fun and exciting story, and I quickly became engrossed in the lives of each and every character. Charbonneau has an easy writing style that helped me settle into the story from page one and it held on tight until the very end.


Rebecca Robbins is a strong MC who doesn't take an ounce of nonsense from anyone, especially resident Deputy, Sean Holmes. Even when she's fretting for her life, Rebecca puts on a brave front and goes about her usual business like nothing life-threatening has ever happened.


When Rebecca’s replacement at the dunk tank is murdered, the biggest question is who was the murderer’s real target – Rebecca or Sherlene-n-Mean? A series of deadly events made it clear who the killer was after…why, was still the elusive question. And, was the stunt at the dunk tank really supposed to have killed anyone?


I really enjoyed being with Rebecca every step of the way as she interrogated suspects, dug up clues, and pieced together the mystery.. Although a number of people had the means and ways, even the motive, there was never a time when one person stood out from the rest and I could actually say “Aha, it was so and so!” The mystery was kept alive throughout the story until the very end, making it feel like I was involved in a game of Cluedo!!


And then of course, as small towns go, there were many smaller dramas going on around the main mystery: The miraculous discovery of ancient native artifacts, Rebecca’s somewhat eccentric grandfather and his womanizing ways, her strange father who showed little to no interest in her, a phony psychic and a curse. But my favorite of all was the not so obvious love triangle. Rebecca clearly cares for Lionel and I wish there had been something more to solidify their relationship, one that I’ll get to know a bit more about once I read the first two books, but I have to agree with Erica, there were definitely sparks between Rebecca and Sean. They had great love/hate chemistry and I see it developing into a whole lot more as the series continues.


This was a fun, quick read, with many interesting characters and an even more captivating plot.

Thank you to JKS Communications for giving me the opportunity to read and review Skating on the Edge.