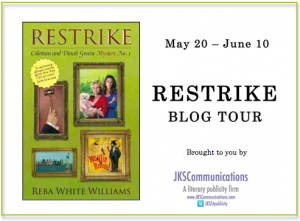 Hello, Therians!
A few months ago I had the pleasure of reading Restrike by Reba White Williams. I'm reposting my review today for the JKSCommunications Restrike Blog Tour.

Check it out below, and be sure to stop by tomorrow as Reba will be stopping by for a quick chat! 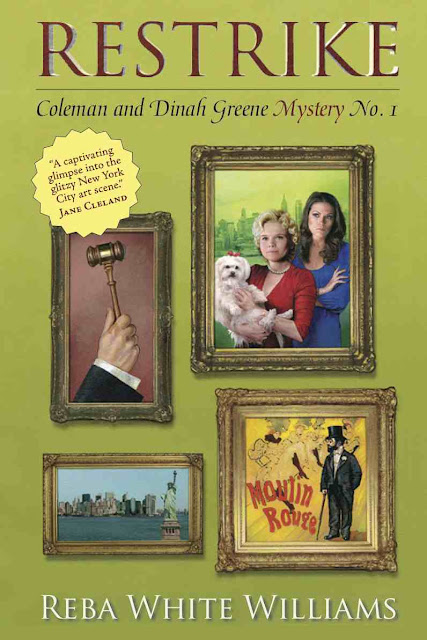 
Cousins Coleman and Dinah Greene moved from North Carolina to New York after college to make their mark on the art world: Coleman is the editor of an influential arts magazine and Dinah is the owner of a print gallery in Greenwich Village. But their challenges are mounting as one of Coleman's writers is discovered selling story ideas to a competitor and The Greene Gallery is in the red because sales are down.


When billionaire Heyward Bain arrives with a glamorous assistant, announcing plans to fund a fine print museum, Coleman is intrigued and plans to get to know Bain and publish an article about him. Dinah hopes to sell him enough prints to save her gallery. At the same time, swindlers, attracted by Bain’s lavish spending, invade the print world to grab some of his money.


When a print dealer dies in peculiar circumstances, Coleman is suspicious, but she can’t persuade the NYPD crime investigator of a connection between the dealer’s death and Bain’s buying spree. After one of Coleman’s editors is killed and Coleman is attacked, the police must acknowledge the connection, and Coleman becomes even more determined to discover the truth about Bain. In an unforgettable final scene, Coleman risks her life to expose the last deception threatening her, her friends, and the formerly tranquil print world.


“There’s a major new presence on the crime scene...Reba White Williams. Restrike will strike a big hit with sophisticated readers who love culture, uncommon criminals and terrific writing. You won’t be able to put this book down!”
–Alexandra Penney, bestselling author of How to Make Love to a Man, former editor-in-chief of SELF magazine

–Jane Cleland, author of Dolled Up for Murder, a Josie Prescott Antiques mystery

“Agatha Christie, Dorothy L. Sayers, Sue Grafton, and a few others, have a new sister in the celebrated sorority of women mystery writers. Her sophistication with art, fashion, food, and scent add extra pleasure to the heart-beating tension.”


–Susan Kinsolving, author of The White Eyelash, Dailies and Rushes


“For art lover and mystery fan alike, Restrike is a feast.”


–Susan Larkin, author of Top Cats: The Life and Times of the New York Public Library Lions, American Impressionism and other books

“I was up all night. WOW! A suspenseful, roller coaster ride through the sexy world of art. You get to learn the inner workings of a serpentine world and have fun at the same time.”

“A first-rate thriller, which holds our rapt attention until the end.”


–John Julius Norwich, author of A History of England in 100 Places: Stonehenge to the Guerkin


“Restrike is a thrilling and compelling story of murder and treachery. Reba Williams kept me spellbound.”


–Francesca Zambello, Director of Glimmerglass, director of opera and musicals, including The Little Mermaid

“A novel that does what the best fiction should always do: it fully inhabits a fascinating subculture. The investigation at the heart of this novel is not just into murder, but into the nature of fraud, forgery, and the secret selves that often rise up unexpectedly to ambush us.”


–K. L. Cook, author of Love Songs for the Quarantined and The Girl from Charnelle

“A fascinating glimpse into the harrowing, high-stakes world of art fraud. Restrike is a smart, fast-paced mystery peopled with vivid characters both charming and dark.”


–Mindy Friddle, author of The Garden Angel and Secret Keepers

“Restrike is savvy, saucy, and scary – a worthy debut from a writer who bears watching.”


–Jacquelyn Mitchard, author of The Deep End of the Ocean and What We Saw at Night

“Starts out with a bang and keeps you riveted! A first rate debut!”


·         Distinguished Cultural Leadership Award (with Dave Williams), for outstanding contributions to the arts and culture of the Empire State, February 10, 1999.


·         The Augustus Graham Medal (with Dave Williams), presented on behalf of the Brooklyn Museum of Art Board of Trustees, for “Outstanding support of the arts,” April 30, 1998.


·         The Polish Order of Merit, Cavalier of the Grand Cross of Poland, First Class, honoring contributions to the financial industry in Poland.


·         Bayard Rustin High School for the Humanities (with Dave Williams).  Appreciation:  “In helping to re-establish a very special environment, you have begun a renaissance which we hope continues until the school has regained its original beauty,” October 25, 1995.

Murder mysteries are always exciting to read. They allow the reader to escape reality and play detective for a few hours. And then there's always that moment of anticipation when the perp is finally revealed.

Williams does a brilliant job of keeping the suspense alive with each turn of the page, and there is never a dull moment as murder, greed, hidden pasts and family secrets grip the art world.

There are a multitude of interesting characters, and even though the story's main focus is the murder of a print dealer and Coleman's determination to discover the truth about his death, each character has their own side-story which kept the story flowing and added to the main plot. The mystery unraveled at a good pace, revealing some very surprising truths about certain characters.

All these truths, along with the many twists and turns within the plot, culminate in one thrilling ending with even more surprises.

I enjoyed every minute spent amongst the pages of this fantastic read. Lovers of suspense and mystery will be riveted by this book.


It deserves nothing less than... 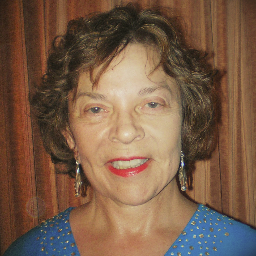 Reba White Williams has written articles for American Artist, Art and Auction, Print Quarterly and Journal of the Print World. She served on the Print Committees of The Boston Museum of Fine Arts, The Museum of Modern Art, The Metropolitan Museum and The Whitney Museum. She was a member of the Editorial Board of Print Quarterly, and is an Honorary Keeper of American Prints at the Fitzwilliam Museum, Cambridge University.


Williams grew up in Mississippi, Tennessee and North Carolina. She graduated from Duke University and her ambition at 21 years old led her to New York, where she began writing about art, business and finance. Williams eventually earned her MBA from Harvard, MA in Art History from Hunter, PhD in Art History from the Graduate Center, CUNY, and MA in Fiction Writing from Antioch University.


She worked as a library assistant, researcher at a management-consulting firm, a Wall Street securities analyst and writer for Institutional Investor magazine and other financial publications, and her expertise and passion for the arts led Williams to write a mystery novel series revolving around art fraud. The first book, Restrike, releases June 2013.


Williams has served as President of the New York City Art Commission and Vice Chairman of the New York State Council on the Arts. In 2009, most of her and her husband’s collection—about 5,000 prints—was donated to the National Gallery of Art in Washington, D.C.


She and her husband founded the annual Willie Morris Award for best Southern fiction, now in its sixth year. With her husband and their dog Muffin, who is fictionalized in her books, Williams divides her time between New York, Connecticut and Palm Springs.