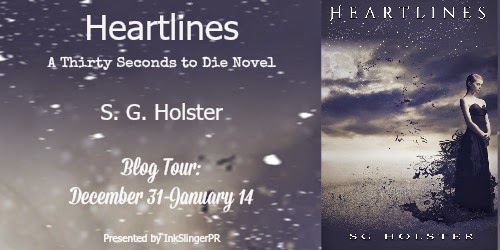 Heartlines is not a standalone book. It is only meant to be read after first reading Thirty Seconds To Die and Terrible Lies.

Sometimes in battle surrender is the strongest move of all. Brett Owen, the son of a Sentori leader, promised himself he’d never do the work of his brotherhood - killing reborn souls. He’d been naïve to make such a vow. He’d been naïve about a lot of things – such as the bond of family and love. Taunted by a Sentori hunter, Brett does whatever he can to survive, even if it means embracing his dark Sentori side and earning the unwanted attention of the Sentori leaders. His life had never looked so frantic. And all the while, his true family is infecting his heart and mind. When his heart is tied to an unexpected soul, he finds himself fighting for a future he desperately wants to live to see. It becomes clear that whatever freedoms Brett is hoping to win will not be gained without a fight. Fragile lives that had been carefully woven together will be ripped apart swiftly and easily. Faith is betrayed. Remorse and innocence intertwine. Fate and chance collide to mend the tattered strands of Brett’s heart in the shocking conclusion to the Thirty Seconds To Die series.
Goodreads | Amazon | BN

I have really enjoyed this series, but I will admit that this was my favorite book from them all. After the revelations that devastated many of the characters in the second book, I was eager to really get to know Brett. He'd been one of those characters you love but hate at the same time, so it was interesting to see things from his POV.

My heart broke over and over for this poor guy who had been cheated out of so many things, and had been turned into something that made him the enemy to everyone who really meant something to him. Throughout this series Brett had swayed back and forth between right and wrong, but in this book he proved that he had a heart of gold, and given the chance he was nothing like his brotherhood.

I was intrigued to see how things would change between him and Ren, and if Brett would ever get over his love for Lexi. Every moment spent with Brett was one of anguish and pain. He was such a complex, broken character, and I prayed for him each step of the way.

This book was fast paced and exciting, with a plethora of emotions filling each page. There were a few surprising twists in the plot that left me breathless, and the ending, the moment Lilly got so excited about her papa, just tore into my soul and left in tears.

Catch up on the series now!!

Lexi Flynn thought she could hide from her dreams. She thought her fears were all in her imagination. She couldn't imagine that after everything she'd been through, she could fall in love. She was wrong. An ancient society, one extraordinary letter, and the secret Alexandra Flynn would die for - again - to protect. For Lexi, life had always been - normal. But it only took one moment to change everything. Her life quickly becomes the opposite of normal when Ren Miller moves to the small community where she lives. Mysterious, handsome, and dangerously charming, Lexi discovers Ren is no stranger. They've met before - in another life. When Ren pulls her into his bizarre world of past lives and secret societies, all bets are off. They become the targets of the Sentori, an ancient, secret society who believes it must protect the sanctity humankind by killing those like Lexi and Ren, those who are reborn. In an effort to protect Ren from the Sentori, Lexi is forced to enlist the aid of the most unlikely of all allies. Her decision ignites a series of events that lead to a heartbreaking decision and a devastating conclusion. If your life was all you had to give, wouldn't you give it to save the only person you ever loved? Thirty Seconds to Die draws the reader deeply into a story of danger and flight, of love and hate, and of the extraordinary power of the spirit - human or otherwise.

This is the second novel in the Thirty Seconds To Die series. Ren and Lexi's story continues...

"Love is whatever you can still betray. Betrayal can only happen if you love." - John le Carre


Against the odds, Lexi Flynn closed the passage for the souls. Fleeing to Alaska was a heartbreaking decision that has left her feeling devastated and alone. She wishes that her life could go back to normal. But as the protector for the passage and being pursued by superhuman assassins, it’s hard to tell what normal is. Just as she hits rock bottom, Ren sweeps in as her hero. Refusing to let her go, he attempts to rebuild her trust. What no one knows is that Ren needs Lexi to save him from his own devastation when a dark family secret is uncovered. Transformed by their decisions, their choices become irrevocable as they learn that some secrets should remain hidden. Lexi must fight to save those she loves while dealing with the conflicting emotions of grief, forgiveness, love, and while discovering the strength of her own identity.


S.G. HOLSTER lives in California with her husband and their two daughters. She is the author of the THIRTY SECONDS TO DIE series. The third and final book in the series, Heartlines, will be published late in 2014.