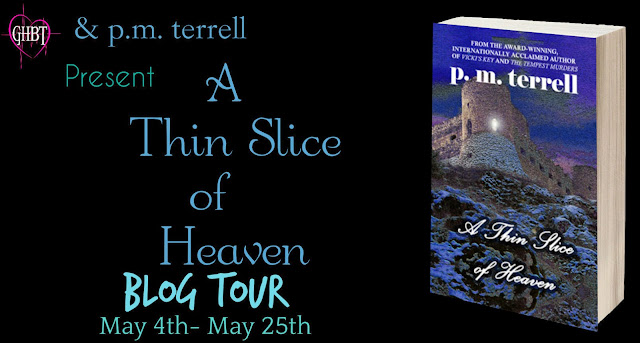 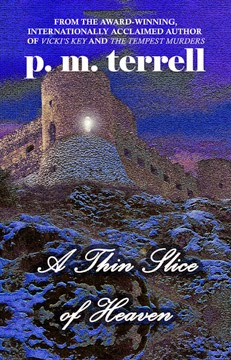 She had arranged to meet her husband in Northern Ireland for a second honeymoon, but when Charleigh arrives at the remote castle, she receives a message that he won’t be coming—and that he’s leaving her for another woman. Stranded for the weekend by a snowstorm that has blocked all access to the castle, she finds herself three thousand miles from home in a country she knows nothing about.
She is soon joined by Sean Bracken, the great-grandson of Laird Bracken, the original owner of the castle, and she finds herself falling quickly and madly in love with him. There’s just one problem: he’s dead.

As the castle begins to come alive with secrets from centuries past, she finds herself trapped between parallel worlds. Caught up in a mass haunting, she can no longer recognize the line between the living and the dead. Now she’s discovering that her appearance there wasn’t by accident—and is more sinister than she ever suspected.

If ‘A Thin Slice of Heaven’ was made into a movie and you could cast anyone you wanted, who would you choose ?

The actor I would select for the role of the Irish ghost, Sean Bracken, is an easy one. Hands down, it would be Santiago Cabrera. Currently, he is starring as Aramis in BBC’s series, The Musketeers, in which he and Queen Anne have lit up the screen in romance. (See video https://youtu.be/Kl0ZZ7N4zGk)

Though Santiago was born in Venezuela, he grew up in London, Madrid, Toronto and Romania.

The role of Charleigh is a bit more difficult. She begins as a woman around 40 who, by her own admission, has a thickening middle and prematurely platinum hair. I pictured a young Judi Dench: classy and classic, proper yet passionate, a woman abandoned by her husband but able to fall in love almost immediately with the Laird of Brackenridge Castle, a man who passed away more than a hundred years earlier. (video: https://youtu.be/DB2qSGp6uKg)

Sean’s wife could easily be played by Zoe Boyle. Fair-haired, light eyes, a classic beauty who served as Lady of Brackenridge Castle before her death. 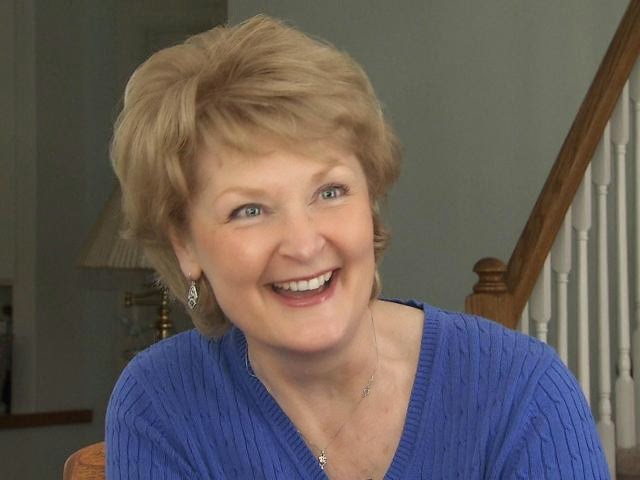 About the Author
p.m.terrell is the pen name for Patricia McClelland Terrell, the award-winning, internationally acclaimed author of more than twenty books in four genres: contemporary suspense, historical suspense, computer how-to and non-fiction.

Prior to writing full-time, she founded two computer companies in the Washington, DC Metropolitan Area. Among her clients were the Central Intelligence Agency, United States Secret Service, U.S. Information Agency, and Department of Defense. Her specialties were in white collar computer crimes and computer intelligence.

A full-time author since 2002, Black Swamp Mysteries was her first series, inspired by the success of Exit 22, released in 2008. Vicki’s Key was a top five finalist in the 2012 International Book Awards and 2012 USA Book Awards nominee, and The Pendulum Files was a national finalist for the Best Cover of the Year in 2014.

Her second series, Ryan O’Clery Suspense, is also award-winning. The Tempest Murders (Book 1) was one of four finalists in the 2013 International Book Awards, cross-genre category. The White Devil of Dublin (Book 2) was released one year later.

Her historical suspense, River Passage, was a 2010 Best Fiction and Drama Winner. It was determined to be so historically accurate that a copy of the book resides at the Nashville Government Metropolitan Archives in Nashville, Tennessee.

Songbirds are Free is her bestselling book to date; it is inspired by the true story of Mary Neely, who was captured in 1780 by Shawnee warriors near Fort Nashborough (now Nashville, TN).
She is also the co-founder of The Book ‘Em Foundation, an organization committed to raising public awareness of the correlation between high crime rates and high illiteracy rates. She is the organizer and chairperson of Book ‘Em North Carolina, an annual event held in the real town of Lumberton, North Carolina, to raise funds to increase literacy and reduce crime. For more information on this event and the literacy campaigns funded by it, visit www.bookemnc.org. 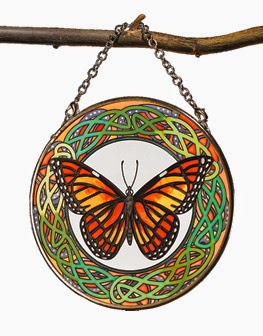