Fans of Rachel Morgan's Creepy Hollow series finally get to begin a new adventure today with the release of the fourth book, A Faerie's Secret! 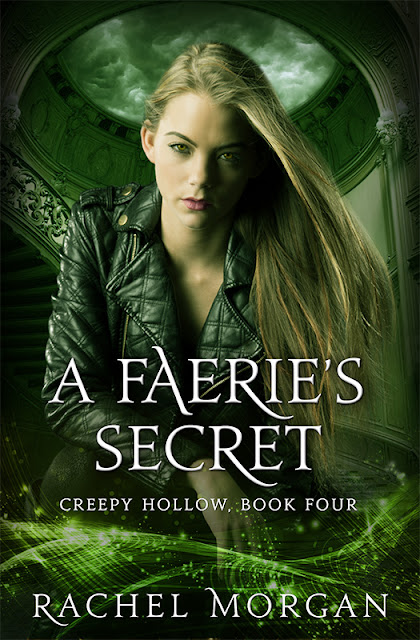 Calla Larkenwood wants nothing more than to be a guardian, but her overprotective mother has never allowed it. When circumstances change and Calla finally gets to join a Guild, she discovers guardian trainee life isn’t all she hoped it would be. Her classmates are distant, her mentor hates her, and keeping her Griffin Ability a secret is harder than she thought. Then an initiation game goes wrong, landing Calla with a magical ability she can’t control. She needs help—and the only way she can get it is by bargaining with the guy who just discovered her biggest secret.

"This fast-paced story quickly gripped me in its clutches"
~ CHERIE REICH, AUTHOR OF THE FATE CHALLENGES SERIES

"Calla is sassy, determined and knows what she wants. ... she was a fantastic character!"
~ KEZ'S KORNER


Come and join the Facebook party tomorrow night, starting at 4pm EDT. There will be prizes from other authors, a "spoiler" thread where you can talk about the book with other readers if you've finished reading it by then, and LOTS of prizes from Rachel!

This book was a fantastic, fast-paced, thrill ride, that kept me on the edge of my seat throughout.

I couldn't wait to jump back into the world of Creepy Hollow, and I was even more excited for Calla's story. She's the perfect mix of sweet and sassy, with her heart in the right place and a fierce determination, making her one of my favorite characters.

Filled with action and adventure, this book did not disappoint in the least. But, it was the mystery of what was really going on with Chase, and who he was after, that really held me captive. With the revelation of her mother's secret past, so Calla found herself in the middle of the drama, tied to whatever mission Chase was on, and the two of them were brought closer by all the chaos they experienced - from the Labyrinth to Saber's attacks and then some.

There is still plenty of mystery surrounding Amon and what his ultimate plan is, and I cannot wait for this story to continue. If that wasn't enough, the ending blew me away. Who knew that one word...one name...could leave me feeling like I had just been hit with a Stun spell! I need more NOW!!

Rachel Morgan is a South African author who spent a large portion of her childhood living in a fantasy land of her own making. After completing a degree in genetics, she decided science wasn't for her--after all, they didn't approve of made-up facts. These days she spends much of her time immersed in fantasy land once more, writing fiction for young adults and those young at heart.
She is the author of the bestselling Creepy Hollow series, and the lighthearted contemporary romance Trouble series.