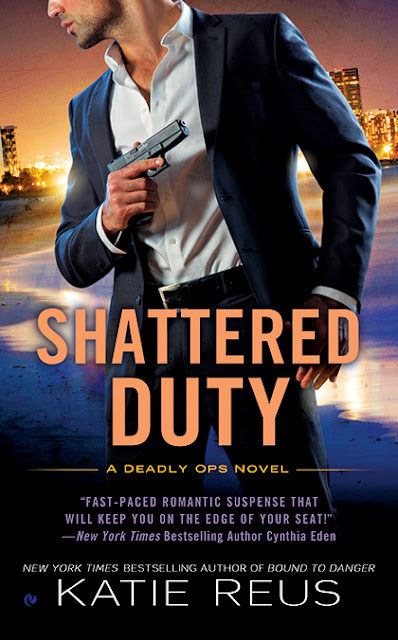 A new novel from the author of Bound to Danger who “has the amazing ability of pulling the reader onto the front lines of the action and drama.” (The Reading Café)

When his wife was murdered two years ago, Special Agent Levi Lazaro turned his back on everything he cared about. Ever since, he has thought of nothing but vengeance. Now he's finally uncovered the identities of those who killed his wife—and he's ready to destroy them at any cost. He won’t let anything stand in his way—not even a beautiful NSA agent on a mission of her own.

Special Agent Selene Wolfe prides herself on being the best. Her fearlessness and quick-thinking make her the perfect person to take down a deadly terrorist cell. But she needs Levi’s help, and the moment he shows up, Selene knows her objectivity—and her heart—are in trouble.

As the two strike an uneasy alliance, Levi finds himself tormented by his desire for Selene—a feeling he thought long dead. But when their mission takes an unexpected turn, he finds himself at a crossroads. Can he put aside his need for revenge to save the woman who’s reawakened his soul?

Hell, she’d probably had a hairpin tucked in her hair. And that was the kind of thing he should have searched for. But the thought of getting too close to her, of running his hands over her body made him ache in the best and worst way. She was walking, talking temptation. He didn’t like it. It made him feel guilty, even if it shouldn’t.
She peeked her head around the corner of the shower, her long blond hair dripping water. She held out her hands and bent one of her thumbs back completely to her wrist and grinned. “Double-jointed thumbs.” Giving him what he could describe only as a cheeky grin, she disappeared behind the glass.
He started to respond when he spotted his bottle of vodka next to the sink, empty. It had been half full before. “What the fuck? You dumped out my vodka?”
She peeked her head out again, her hair soapy from shampoo. Her pale eyes narrowed at him. “Yep. If we’re working together, you’re sober. I won’t work any other way.”
“It’s not like I’m drinking on the job.” He hadn’t touched it before he’d left for Shah’s party. But he drank at night. It was the only way he could get to sleep. Vodka took that edge off.
She raised one of her perfect eyebrows. “I don’t care. You either deal with my rules or don’t work with me. I don’t have to take you with me tomorrow.”
Which brought up another interesting point. “You think you owe me because of something . . . Meghan did for you?” It felt weird and a little therapeutic to say his dead wife’s name. For so long he’d just thought about her but he hadn’t been able to talk about her to anyone. Even if it was pathetic, he was starved to talk to someone who knew who he was. The real him.
Selene moved back behind the glass and he could see a blurred outline of her rinsing her hair out. “You did a lot for your country, Levi.”
Okay, that wasn’t an answer, but he wasn’t going to push. Instead he went to the toilet seat, sat on the closed lid and leaned back. “You could have left.”
“Are you going to keep saying obvious things all night?” she asked, her voice light and teasing.
A rusty laugh escaped, the sound shocking him as it rattled in his chest. “Fine. Why didn’t you leave?”
“I think you’ll be a valuable asset and you’ve been off the reservation for two years. Considering the people you’ve worked with—and yes, we know about some of them, but probably not all—your cover will be solid, which means you’ll give me more credibility. My ID might be solid but I haven’t done many meets. But if you give me a reason, I’ll cut you out of this op and not lose any sleep over it.”
Setting his weapon on the counter, he put his hands behind his head and leaned back. For the first time in years he felt like his old self. Not completely because he’d never be that man again, but he felt almost . . . normal. He grasped the illusion, knowing he’d have it for only a few minutes or maybe even hours. “How’d you get involved with Wesley? You look too young.”
“How does anyone get recruited?” she asked vaguely.
He snorted. “Fair enough. How old were you when he recruited you?”
A long silence stretched between them and he eventually realized she wasn’t going to answer. When the water shut off, he jerked upright and stood. Sitting here, he’d been trying to convince himself he didn’t care that she was naked behind the frosted glass. The thought of what color her nipples might be or . . . damn it, what was wrong with him? It had been so long since he’d felt real attraction to a woman, not just noticed her in the physical sense. It wasn’t as if he was blind because his wife had died, but his dick hadn’t cared about any woman, period. Now it decided to wake up—with a woman he was going to be working with. Unless of course she decided to betray him to Wesley. That made him frown even more. “I’ll give you privacy,” he muttered and strode from the room unsteadily. He shut the door behind him with more force than necessary, then cringed at himself.
As he stripped off his jacket he realized his laptop had been moved. It was only a half inch or so, but he was particular about the way he left his things. That kind of training had been ingrained into him long ago. Turning around, he whipped open the door and froze.
Selene was bent over drying her legs but she jerked up at his entrance. Taking him by surprise, she turned toward him, covering her breasts with one arm and snapped her towel at him lightning quick, hitting him right in the eye.
“Shit,” he yelled, jumping back holding one hand up defensively while covering his stinging eye. “I wasn’t—”
“I knew you were a pervert,” she shouted and before he was able to fully retreat something hard hit him in the middle of the chest. A bar of soap.
“Selene—”
She slammed the door in his face.


Katie Reus is the New York Times and USA Today bestselling author of the Red Stone Security series, the Moon Shifter series and the Deadly Ops series. She fell in love with romance at a young age thanks to books she pilfered from her mom's stash. Years later she loves reading romance almost as much as she loves writing it. However, she didn't always know she wanted to be a writer. After changing majors many times, she finally graduated with a degree in psychology. Not long after that she discovered a new love. Writing. She now spends her days writing dark paranormal romance and sexy romantic suspense.
Links:


A Reader Who Reads


Books Can Take You There