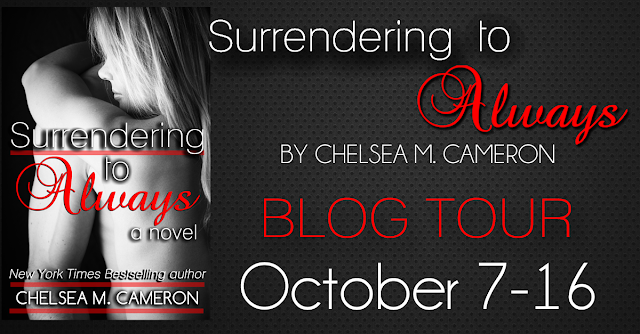 They’re about to walk down the aisle, but more than one obstacle is standing in their way…

Rory Clarke didn’t want to get married until she was at least thirty. But then she hired sexy redheaded, chin-dimpled Lucah Blythe as her assistant at Clarke Enterprises and everything changed. She’s finally agreed to set a wedding date and plans are well underway. Rory's definitely starting to see the perks of being engaged and she couldn’t be happier. As long as everything goes her way, of course.

That is until not one, but two huge surprises rock her world, putting everything she’s planned in jeopardy. Her job, the wedding, the future she planned for herself. Lucah is there for her no matter what, but trusting someone else isn’t always easy, even if you love them more than anything.

Her road to the alter is a rough one, but will Rory decide it’s not worth the struggle to get there? Or will she take Lucah’s hand and throw herself into their future together?

ADD SURRENDERING TO ALWAYS TO GOODREADS

EXCERPT
“Hey. I’m not angry with you for having what you have. You know that. We just grew up differently. That’s not anyone’s fault. It just is the way it is.” I hated that it was the way it was. I wanted to go back and change it.
“I know. I don’t like it, though.” He chuckled softly.
“Oh, Sunshine. You can’t change my past or yours. We can’t unroll the dice. We can only go forward. And I want to go forward with you. Beside you.” He always said the right thing. The perfect thing.
I leaned against him and he gathered me to his chest.
“My childhood wasn’t bad, Rory. It wasn’t easy, but it wasn’t bad. I don’t regret how I grew up because my parents always made the best of it. Those were the days I had with them and I cherish every moment. Even the ones where we ate cereal for dinner.” Talking like this always made me uncomfortable. I could listen and tell him I loved him and that was about it. Made me feel useless.
“I know. I still feel guilty,” I said into his shirt. I played with his buttons. Maybe coming here had been a bad idea.
Lucah didn’t answer me. Instead, he stood up, pulling me with him.
I was about to ask what he was doing when he stripped off his shirt and then his shoes.
“You are not doing what I think you’re doing,” I said, but he most definitely was. He got down to his boxers and then hurled himself off the edge.
I screamed, he splashed and then surfaced. I used the flashlight to find him and he smiled at me as he bobbed in the water.

PREVIOUS BOOKS IN THE SERIES:

SURRENDERING TO US (book #2)

Win a $50 Amazon Gift Card during the SURRENDERING TO ALWAYS blog tour from Chelsea M. Cameron.
a Rafflecopter giveaway

Chelsea M. Cameron is a New York Times/USA To-day Best Selling author from Maine. Lover of things random and ridiculous, Jane Aus-ten/Charlotte and Emily Bronte Fangirl, red velvet cake enthusiast, obsessive tea drinker, vege-tarian, former cheerleader and world's worst video gamer. When not writing, she enjoys watch-ing infomercials, singing in the car, tweeting (this one time, she was tweeted by Neil Gaiman) and playing fetch with her cat, Sassenach. She has a degree in journalism from the University of Maine, Orono that she promptly abandoned to write about the people in her own head. More often than not, these people turn out to be just as weird as she is.