The fabulous Cheryl Rainfield is celebrating the release of her new YA Fantasy, Parallel Visions, by giving away a Kindle, Kobo or Nook, as well as bookstore giftcards!! Yay!! 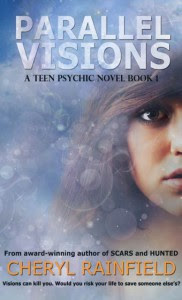 Isn't the cover just so BEAUTIFUL??!!??
SYNOPSIS
A new YA fantasy from award-winning author of SCARS and HUNTED Cheryl Rainfield.

Visions can kill you. Would you risk your life to save someone else’s?

Kate sees psychic visions of the future and the past—but only when she's having an asthma attack. When she "sees" her sister being beaten, she needs more visions to try to save her, along with a suicidal classmate—but triggering her asthma could kill her. Parallel Visions is the story of one brave, caring girl whose unusual gifts put her own life in danger.
﻿


Check out the book trailer:

Get your copy of Parallel Visions now:
Amazon.com Paperback