Hello Therians!!
If you haven't heard of Airicka Phoenix, or if you haven't read any of her work, then it gives me great pleasure in introducing you to my new favorite author!
Touching Smoke is the first book in the Touch series. Touching Eternity (Touch series #1.5) will be released today ( 12.20.2012 ) so I urge you to get your hands on this series. You won't be disappointed!!

Fallon has one. She doesn’t know it, but it will kill her... if she’s caught.

Willing to die for her, kill for her, Isaiah must first save her from the monster chasing them — the man that had created them to annihilate the world.

What would you risk for love?
BOOK TRAILER


I won a copy of Touching Smoke in a giveaway a few months ago. I only wish it hadn't taken me so long to read it, as it has to be one of my favorite new series.

From page one this book is a non-stop, thrill ride, with plenty of action and just as much romance. The story is well written with clever twists and turns, and I couldn't put it down. Fallon is a seemingly ordinary teen, with the exception of never settling in one place long enough to have a real life. Although it soon becomes obvious that she isn't normal, in any way, the truth is revealed gradually throughout the book instead of one big info dump, which is fantastic.

Isaiah is the mysterious protector who literally rides into her life. It was like an electric spark went off every time they were near each other and the chemistry and sexual tension was almost tangible. Fallon cannot understand why she is so drawn to him, a complete stranger. She even feels compelled to defy her own mother when it comes to Isaiah. It is only after meeting the mad scientist/doctor, Garrison, that the reality of their situation is uncovered. But I still have my doubts. I still believe that their connection runs deeper than what Garrison told them. Or maybe that’s just hope talking…

It is also at this point in the story that the truth about Amalie, the girl who haunts Fallon’s dreams, is exposed. This truth unravels Fallon’s, as well as Isaiah’s, entire existence. At the same time shattering any notion I had of knowing exactly what was going on in the story, raising a bunch more questions.

I love a story that keeps me guessing, and this one delivered in all the right ways. The characters are exciting and I want to get to know them a whole lot more, so I cannot wait for the rest of the books in the series to be released.

This outstanding novel gets... 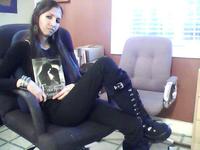 Airicka Phoenix is the author of TOUCHING SMOKE (Touch Series Book #1) and has a short story, TORRID, as part of the Whispered Beginning: Clever Fiction Anthology. When she's not hammering away at the keyboard, she can be found banishing pirates or crawling through the attic looking for lost treasure with her kids. She loves baking, gardening and reading. She also likes to travel and take pictures of everything she comes across. When asked, Airicka describes herself as a sarcastic basket case that has an unhealthy addiction to chocolate, old movies and really bad jokes. She loves to laugh, make friends and write. If she could have one wish granted, it would be to spend one day as a fly-on-the-wall inside Stephen King's mind. If she could have two wishes granted, she would ask for a castle dedicated entirely to her overwhelming collection of books.
For more about Airicka, also on how to win giveaways, read author interviews and reviews, visit her!

You can add Airicka on any/all of her social networks. Making new friends is the highlight of her day!