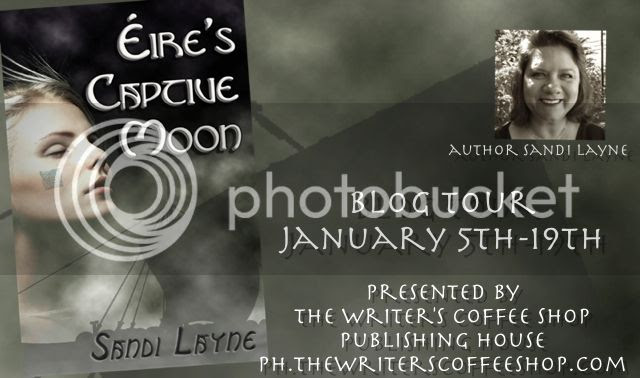 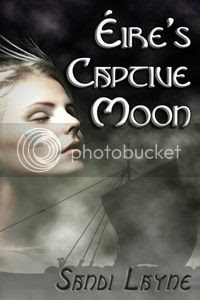 Éire’s Captive Moon, the first book of Sandi Layne’s Éire’s Viking Trilogy, brings you to the unsettled era of the early Viking raids along the coast of Éire – today’s Ireland.

Red-striped sails make their first appearance on the shores near the village of Ragor and the peaceful life of the villagers is obliterated in one deadly raid. Agnarr Halvardson and his overlord, Tuirgeis, have come to Éire for treasure, honor, and slaves.

After slaying her husbands, Agnarr claims Charis, the healer of the village, as his personal medicine woman – and sex slave. Cowan, a local prince, is captured by Tuirgeis to serve as translator for trading journeys. Leaving the smoking ruins of Ragor and Bangor Monastery behind them – as well as the children Charis had carefully hidden from the Northmen – the invaders sail away.

Cowan, a Christian, is captivated by the pale, widowed herbalist, and finds himself in love with her by the time they reach Nordweg, where they will spend the winter. He is compelled to leave her, however, to serve his master.

The winter brings many trials. An invasion from another village’s warriors throws Cowan and Charis together more intimately than she is prepared to handle equitably. Her own feelings are growing uncertain, though she reminds herself that she has to return to Éire and the children she left there. As winter passes in Nordweg, Charis plans vengeance upon Agnarr even as she learns to see him differently. Beset by accusations of witchcraft, hounded by Agnarr’s betrothed and her slave – a refugee Charis herself healed more than a year before – and having to adapt to the strange language and customs among the people around her, Charis still makes her plans. Will she be able to put aside her feelings and escape when spring returns?

I love historical fiction, especially stories with a strong romance angle. There's just something about being swept away to another time and place that adds to the romantic element, and Sandi Layne's Éire’s Captive Moon did not disappoint in the least. In fact, I think it was probably one of the best historical fiction novels that I have read in forever.

The characters are all believable and even though a few of them were deplorable at times, there was no way I could stop from falling in love with them. Charis has such a strong personality and high morals that I couldn't fault her in any way. I love that she stood up for what was right and just, in her eyes, and she wasn't going to let anything stand in her way. There was a time when I thought her mind had been swayed (perhaps a small part of me was hoping for it), but I was pleasantly surprised when the unexpected happened. I think that's what makes this story such an amazing success. It was unpredictable in the best possible way.

Agnarr is a bit of a brute, but he wouldn't have been a credible character had he been any different. As the story unfolded I got to see the many layers of Charis's captor, and it allowed for me to really understand and connect with him. I felt sorry for him. He was a man on a mission, and even though it may have seemed like his choices were wrong, it was all he knew, so how could he be faulted.

Overall, this story was exciting and unique. It took me on an amazing adventure back in time, filled with action, romance and intrigue. It truly was captivating!

Not only did I get the chance to read this amazing book, but I also got to spend some time with the charming and brave Cowan. Here's what he had to say:

Thanks for joining me today.


2.      Why did you return for Martin, rather than going back to your father for help?
I couldn’t just leave him alone. I couldn’t. He was like a child, innocent for all his studies, and I thought that I could help him if I returned. *sighs*


3.      In all the time that you were captive, is there anything you would have done differently?
I shouldn’t have been so cowardly about telling others about the One True God. I worried more than I should have about it, I’m thinking.


4.      You seemed to have it much easier than the other slaves, is that why you bent to Tuirgeis’ will so easily?
Easier? Well, compared to some of them, aye. I believe that Tuirgeis respected me when he took me and so he treated me well.  A translator who has an axe to grind is not to be trusted. How would he have known that I would have given him true service, regardless? I would have, of course, but he didn’t know that. And, too, I respected the man. I did. He wasn’t inherently a bad man - I still don’t think so, even if I didn’t want to stay with him.


5.      There seemed a time when you looked up to him, even respected him, and were quite comfortable to be his “brother”, would you ever have left had Charis not hatched her own plan to escape?
I’ll tell you the truth, if it hadn’t been for Charis, I could have been content, aye.  Especially when I was adopted. Now, it’s true that I still wanted to return to my people, but I probably would have waited on it, until Tuirgeis himself was ready to return to Éire.


6.      Speaking of Charis, how is she? Still as defiant as ever?
*grins broadly with a faint flush rising up his throat*
Well, now. Life is good, with her. Very good. We’ve got the children sorted out and have a home of our own, now, with room enough for her herbs.


7.      When did you know you were in love with her?
I think I started caring for her almost right away, when she was causing so much trouble for Agnarr before we were even taken on the longship. But, though it might seem shameful to say it, I do believe my heart was lost the night I found her crying the first time alone on the ship after she’d spent the day with him. Agnarr.


8.      What about Charis has you most enamoured?
The woman has spirit. And you’ve never seen anything like the way she can look at a man. But even though she’s strong enough to go it alone, for she can and will, she’s chosen not to. She chose to go with me. Even when we weren’t going anywhere, and even though I knew that she had her own reasons, still.  *sighing and shaking his head*
9.      As a man who follows the One True God, was there ever a moment you believed Charis to be a cailleach, especially after witnessing her healing abilities?


To be honest with you? It wasn't her healing that made me wonder. It was when she called the fog. *shakes his head* As eerie a thing as I've ever seen I'll tell you that for certain.

10.      If, she had in fact turned out to be a wielder of dark magic, would that have changed your view of her?
Aye, I think it would have. If I had had *proof* that she was a true witch?  *sighs* That's a serious thing, and it touches on a power that I don't think I would be wanting to have near me.


Well I think that just about sums it up. Thanks again for the chat.

Get your copy today!! 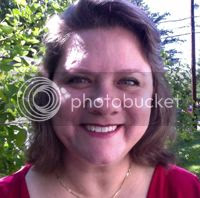 Having been a voracious reader all her life, Sandi never expected to want to write until the idea was presented in a backhanded manner. Once the notion occurred to her, though, she had to dive in the deep end (as is her wont) and began by writing historical fiction. She has since written more than twenty novels—most of which will never see the light of day.

Sandi has degrees in English and Ministry, has studied theology, spent years as an educator, has worked in escrow and sundry other careers, but research is her passion. She won an award for Celtic Fiction in 2003, but as well as history, she is also fascinated with contemporary research and has self-published several novels in the Inspirational Romance genre.

She has been married for twenty years to a man tolerant enough to let her go giddy when she discovers new words in Old Norse. Her two sons find her amusing and have enjoyed listening to her read aloud—especially when she uses funny voices. A woman of deep faith, she still finds a great deal to laugh at in the small moments of the everyday and hopes that she can help others find these moments, too.