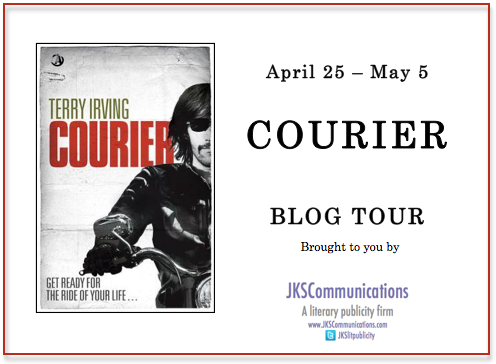 "This is a goddamn big story. It'll make those jerks at the Post look like idiots and Watergate look like a cop taking an apple off a fruit stand."

It's 1972. The Watergate scandal has Washington on edge and Putnam, a Vietnam veteran and courier for one of the capital's leading television stations, is trying to get his life back together after his nightmarish ordeal in the war. Racing at breakneck speed through the streets of the capital, he not only intends to be the best courier in the business, he also intends to escape the demons that haunt him. But when Rick picks up film from a news crew interviewing a government worker with a hot story, his life begins to unravel as everyone involved in the story dies within hours of the interview and Rick realizes he is the next target.

Enlisting the aid of friends who have discovered a way to hack into the government's computer databases, and a beautiful young Indian Rights activist, Eva Buffalo Calf, Rick races full throttle through the streets of the nation's capital to stay ahead of his pursuers as he searches for answers. When he discovers the killings have been orchestrated by a rogue CIA agent and his team of assassins, Rick isn't surprised when his road to the truth leads directly to 1600 Pennsylvania Avenue.

WASHINGTON, D.C. – The motorcycle that Vietnam vet Rick Putnam rides around Washington D.C. is fast, but is it fast enough to escape his destructive memories of the war and the hired guns who are trying to kill him?

In his debut novel “Courier” (May 1, 2014, Exhibit A Books), Emmy award-winning journalist and writer Terry Irving paints a gritty picture of a Washington DC that today has completely disappeared under new parks and high-rise office buildings. In the middle of the scandal and drama of Watergate,  Rick, a motorcycle courier, unsuspectingly picks up a roll of news film and—after the correspondent and crew are killed—finds that he is next on the killer’s to-do list. With the help of friends—and a woman who threatens to crack the shell he's built to defend his heart—Rick must discover what's on the film and why officials are willing to kill to keep it from the front pages.

Legendary broadcast news anchor Ted Koppel notes how Irving’s first-hand experience brings the novel to life, “If the phrase 'a crackling good yarn' evokes an era before Twitter, Facebook, cell phones, videotape, DVDs or cable television, welcome to Terry Irving’s fast-paced thriller from a bygone age. The Vietnam War is winding down, a wounded vet takes a job as a motorcycle courier at a network's Washington news bureau, and finds himself caught up in the backwash of a harrowing conspiracy. Terry Irving knows the landscape. I was there. So was he.”

In a hat tip to Paul Fussell’s classic “The Boy’s Crusade,” Irving’s story unveils the bonds between men who fight together and the distance between those that order the attacks and those who carry them out.

Irving is a television producer and writer who lives near Washington D.C. He moved to the nation’s capital in 1973 when he – much like the protagonist in his new book – became a motorcycle courier for the ABC Washington Bureau. He has worked in newsrooms at CNN, Fox, ABC and MSNBC. He has won four National Emmy Awards along with multiple Peabody, DuPont and Telly awards.

“Courier” is the first book in The Freelancer Series, with “Warrior” to follow several other stories planned.


"Terry was one of the most imaginative and enterprising television producers I ever worked with. It's not surprising then that ‘Courier’ is a terrific page-turner with a clever backdrop and compelling characters."
– Erik Sorenson, former president of MSNBC

"If the phrase 'a crackling good yarn' evokes an era before Twitter, Facebook, cell phones, videotape, DVDs or cable television, welcome to Terry Irving's fast-paced thriller from a bygone age. The Vietnam War is winding down, a wounded vet takes a job as a motorcycle courier at a network's Washington news bureau, and finds himself caught up in the backwash of a harrowing conspiracy. Terry Irving knows the landscape. I was there. So was he."
– Ted Koppel, former Nightline anchor

"The year is 1972, mix the White House, the Watergate burglary, the war in Vietnam and murder in Washington and you've got a terrific story...Kudos to one of television's best producers for writing the thriller of the year!"
– Sam Donaldson, former White House reporter

“If you can remember the ‘60s, you never lived through them. If you lived through the ‘70s, you'll never forget. Irving masterfully brings back the cold-eyed conspiracy lurking behind the smiley face.”
– Marshall Arbitman, senior writer for Anderson Cooper


"Finished the book on the flight that day...loved it."
– David Bohrman, former president Current TV

"In ‘Courier,’ Terry Irving has a page-turner of a first novel. I picked it up – in draft form, on a tablet, yet – and couldn't put it down. Buy it, and start reading early enough in the day that you don't stay up all night finishing it."
– Martin Heller, author, entrepreneur and chairman of Tubifi

“Rick is one of those great characters that guys want to be and woman, well, just want... And, boy, do those pages turn fast. This is an incredibly cinematic read, with a fine cast of minor characters also, and fascinating too on the politics and counter-culture surrounding this resonant and rich period of recent U.S. history.”
– Emlyn Rees, author of the best-selling thriller "Hunted"

Murder, mystery and mayhem abound in this exciting thriller.

An intricately woven, intelligently written story with plenty of intrigue, I was hooked from the very first page. It was fast paced, with layer upon layer of suspense and chaos. I was thrilled to go along for the ride as Rick literally raced against time to unravel a scandalous story that could very well lead to his own demise.

Exhilarating and nerve-wracking, this book kept me on the edge of my seat. It was a stellar read!

Author and long-time journalist Terry Irving moved to Washington D.C. in 1973 to kick around for a few weeks and never looked back. 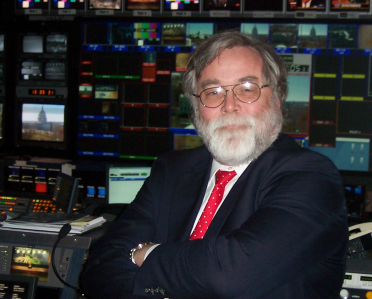 In the nation’s capital, Irving started out riding a classic BMW R60/2 for ABC News during Watergate. Carrying that news film was the beginning of a 40-year career that has included producing Emmy Award-winning television news, writing everything from magazine articles to standup comedy and developing early forms of online media. He has traveled and worked in all 50 states plus parts of Europe, Africa and Asia.

Irving is the winner of four National Emmy Awards, multiple Peabody, DuPont and Telly awards, plus an honor at the Columbus Film Festival. He has produced stories around the world from the fall of the Berlin Wall to Tiananmen Square. He worked as a senior live control room producer at CNN, Fox, ABC and MSNBC. He wrote and edited copy for some of the top anchors and journalists in television news including Ted Koppel, Diane Sawyer, Wolf Blitzer, and Aaron Brown.

Irving is an active member of the International Thriller Writers and the Mystery Writers of America, and serves as a board member of the Foundation for Moral Courage.

Irving is the author of the on-going memoir “On the Road” and the self-help book “The Unemployed Guy’s Guide to Unemployment,” both published in 2012 by Rock Creek Consulting LLC. His debut novel “Courier” releases May 1, 2014 from Exhibit A Books, the crime fiction imprint of Angry Robot Books. It’s the first of several books planned for The Freelancer Series.

Irving and his wife live just outside Washington D.C. because their dog simply refuses to live anywhere else.