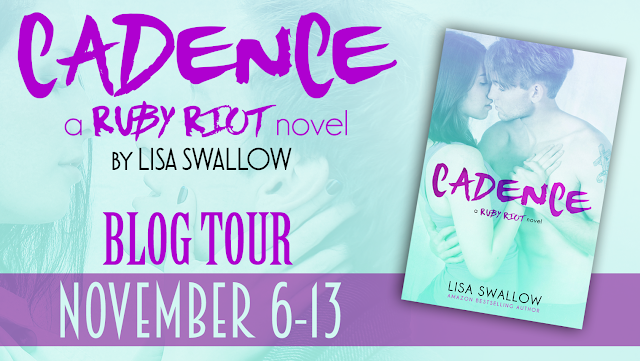 Tegan Hughes joins Blue Phoenix and Ruby Riot on tour, and drummer Bryn isn’t the only one who notices his little sister isn’t a kid anymore.
Jax Lewis is the guitarist for Ruby Riot and the band are rising to success. He’s hot property and loving every minute of his new found fame. Now, he’s on tour supporting Blue Phoenix and living his rock star life to the full. Until Tegan walks into his world and puts the brakes on.
Tegan Hughes is taking a year out and has her sights set on touring Europe with her big brother’s band. Blue Phoenix drummer, Bryn isn’t happy when his sister arrives unannounced at his hotel in Lisbon, but Tegan isn’t the type of person to take no as an answer.
With her big brother breathing down their necks, Jax and Tegan attempt to keep a handle on their growing attraction but that proves harder than they thought. Jax is used to getting whoever and whatever he wants and after kissing Tegan once, he knows one thing…he wants more.
The problem is, Tegan isn’t rock star girlfriend material. She has ambitions of her own and refuses to let anything stand in the way of her plans. But when Jax and Tegan’s relationship becomes public knowledge life becomes a hell of a lot more complicated.
Cadence is the first standalone book in a new rock romance series, Ruby Riot. The series is a spin-off from the Blue Phoenix books but you do not need to read the Blue Phoenix series first. 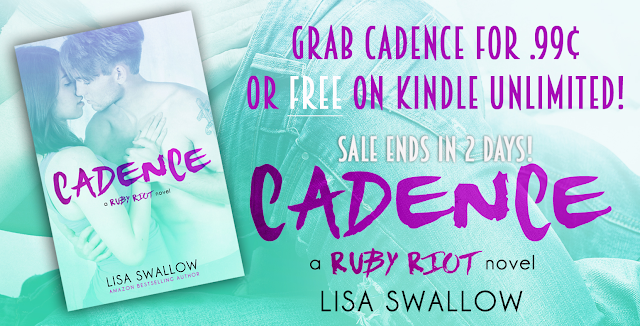 This book is available exclusively through Kindle Unlimited (for FREE) or you can purchase it for .99 cents for 2 days only!

Jax.
Watching him on stage is like seeing a different person. He’s the same good-looking guy in his rock and roll uniform, but so much more. Suddenly Jax’s jeans appear to hug him that much better; and I can’t drag my gaze from his lithe, muscled body as he moves on stage. The lights capture Jax’s face as they strobe, stroking the angles of his face and highlighting a smile on his full mouth. I’ve met him several times, aware of his attractiveness, but this is different. This is Jax, the Rock Star.
Now I understand all the hype about the guy, but this isn’t hype. This is real. Jax Lewis has a presence that matches his talent and I’m enthralled by him.
As Jax eases into the performance, he relaxes further and his confidence radiates into the audience. Jostled by the eager dancers either side of me, I stand transfixed, the memory of our charged meeting this morning heating my blood further. I’m gone. Lost. Jax has me in his spell, each note he plays vibrating beneath my skin until I’m unaware of the rest of the band, willing him to notice me.
A pause between tracks and Jax lifts a hand to push hair from his face. I’m close enough to see the dark patches where the perspiration dampens his t-shirt across his chest and the way his hair messes further with the action. I’m also close enough to see when Jax scans the crowd, smiling. A hundred girls’ hearts explode and I’m betting there’s some panty dampening going on that has nothing to do with being in the middle of a sweaty crowd.
I’m not immune from the effect either, and my involuntary lust for this guy shocks me.
When Jax’s look rests on me, my brain empties and the remaining oxygen in the claustrophobic crowd disappears. Jax’s attention remains fixed on me and I smile. The smile he returns is different to the one he’s thrown at the rest of the girls, a smile for me, a connection that somersaults my stomach. Men don’t have this effect on me; but I’ve never been smiled at by a rock star surrounded by people lusting after him, and his focus is me.
This is bad.

The next book in the Ruby Riot series, SHUFFLE, is now available for pre-order!

Lisa is an Amazon bestselling author of contemporary and paranormal romance. She is originally from the UK and moved to Australia in 2001. She now lives in Perth, Western Australia with her husband, three children, and Weimaraner, Tilly, who often makes appearances on Lisa’s social media. Lisa’s first publication was a moving poem about the rain, followed by a suspenseful story about shoes. Following these successes at nine years old there was a long gap in her writing career, until she published her first book in 2013. In the past, Lisa worked as an English teacher in France, as an advertising copywriter in England, and ran her own business in Australia. Now she spends her days with imaginary rock stars. She lived in Europe as a child and also travelled when she left university. This has given Lisa stories which would sound far-fetched if she wrote them down, and maybe one day she will. These days, Lisa is happy in her writing cave, under Tilly’s supervision.