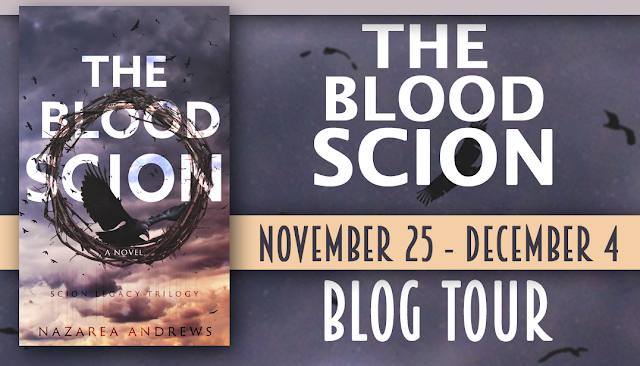 Click here to add THE BLOOD SCION to Goodreads

I was just a reporter, trying to stay ahead of my student loans. I knew the rules, and I followed them.

The Houses. And their Scions.

Everyone knows the great Houses and their Scions—they are feared and loved and hated and envied. They are the gods who walk the shadows and rule all of our lives. They are salvation and death.

And somehow, I am one of them.

REVIEW
When I read The Scionless House I knew I was going to love this new series. It was a unique take on the vampire world but also had an Underworld tone that got me so excited.

The Blood Scion starts off where the FREE (Yes, free!) novella ended, with Tavian and Sulla tasked with retrieving Farley, and it was obvious from the get go that this would not be any easy one as she seemed so dead against the vampires who'd save her world only to turn around with some hefty demands.

I liked that Farley didn't cower at the sight of them, even though she clearly wanted to. She stood up for herself and even though it got her into trouble at times, it spoke volumes about her character. Also, the fact that she stepped into the role of Scion, putting aside her feelings in the face of adversity only made me like her more. She had a tough decision to make toward the end of this book and I have to say that I was pleasantly surprised by the way things turned out. It showed that her new "family" were willing to go the extra mile for her, just as she was willing to for them.

I really enjoyed getting to know the characters more and I cannot wait for the rest of this series. I must add, however, that at one point I felt that there was something missing from this book. It seemed that an entire part of this story was missing between Part 3 & 4, and I would have loved to have seen the desire and chemistry develop between Fars and Tavian a little more. It was there for most of the book, but it felt lukewarm, and then suddenly ignited in one amazing scene. Other than that, this book was Fantastic.

Click here to add THE SCIONLESS HOUSE to Goodreads

Twelve Houses. Twelve vampire lines. We ruled from the shadows, and manipulated the world, and when humans came too close to destruction, we intervened.

Every House has a Scion. A fragile, easily broken human that stood shoulder to shoulder with the house Princes and Princesses.

Except for ours. The Ravens, House Cantelie.

We've been without a Scion for almost fifteen years.

But that will change...and her life will be mine to protect.

Get THE SCIONLESS HOUSE for FREE!

Nazarea Andrews (N to almost everyone) is an avid reader and tends to write the stories she wants to read. Which means she writes everything from zombies and dystopia to contemporary love stories. When not writing, she can most often be found driving her kids to practice and burning dinner while she reads, or binging watching TV shows on Netflix. N loves chocolate, wine, and coffee almost as much as she loves books, but not quite as much as she loves her kids. She lives in south Georgia with her husband, daughters, spoiled cat and overgrown dog. She is the author of World Without End series, Neverland Found, Edge of the Falls, and The University of Branton Series. Stop by her twitter (@NazareaAndrews) and tell her what fantastic book she should read next.