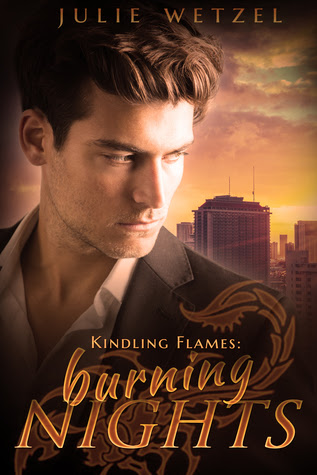 
After a wedding filled with werewolves, fay, and vampires, Vicky is looking forwards to a nice, quiet honeymoon away from the chaos of Darien’s daily life. But nothing is ever simple with an Ancient Vampire around.
When the Vampire Council of Hawaii finds out Darien and his new bride are coming, they are determined to see that Darien is honored properly. But vampire etiquette isn’t for the faint of heart.
The nights could burn when lines are drawn… and Darien finds himself in a turf war he never intended to start.

SNEAK PEEK
After a few moments, Darien shifted in his seat to face Elliot again. “Look. If you ever have a problem, I want you to bring it to me.” Elliot opened his mouth to protest, but Darien cut him off. “I know you’re a master unto yourself, but you’re also my friend, and I hate to see you suffering. Even if you don’t think I can do anything, just talk to me. Sometimes that’s all it takes.”
Elliot stared at him for a moment before nodding his head. “All right, but you have to promise me the same.”
Darien chuckled as he faced forwards and started the car. “Deal. Now let’s get going before Patrick sends someone out to find us.”
Elliot laughed as they pulled out into the night. Nothing had really changed, but his heart felt lighter than it had in weeks.

GUEST POST
I’m an author not a murder
“Julie?” my husband calls from the other room.
Walking into the living room, my heart skips as I see him sitting at my computer. “Yes?” I ask.
He waves his hand at the screen. “Should I be worried?”
Leaning forwards, I place my hand on the back of his chair so I can see what he is looking at. The man has foolishly opened my browser history and found my research on poisons. “No,” I say with a smile, “that’s just research for my book. What would you like for dinner tonight?”
Giving me a dubious glance, he looks at the website detailed the best way to make ricin and shakes his head. “I think we should eat out for a while.”
“Good, my caster bean plants haven’t finished growing yet,” I tease as I leave to get change for dinner.
Every time I start into a new book, my husband gets worried that I’m going to kill him in horrible and gruesome ways. But I’m not really researching the best poisons to slip in his meal, I’m finding out the best way to kill off my characters.
The backbone of a good story is how believable that story is. You can have great characters and a good plot, but if their actions aren’t possible in the real world, then the story suffers for it. So if an author comes up on a subject they haven’t had personal experience with, like making chloroform, they need to find a source of information to help. It’s amazing the things you can find on the internet. I’ve spent hours researching how the world works to make sure the details of the book match real world scenarios. But of course the cost of easy research is a browser history that would scare the pants off the local authorities.
For Kindling Flames Burning Nights, I spent many nights poring over endless documents on poisons looking for something that would kill quickly and how it worked. An on page death scene wouldn’t be complete without proper a proper description of how the person died. And night—while my son is in bed and not there to ask questions—is the best time to do this kind of research.
What’s even worse are the places that I’ve bookmarked because they’ve provided me with amazing information. Not only for my vampire series, but for other projects I’m working on. There is a wealth of information out there, but you really do have to go to some fairly shady places to find some of the darker subjects.
So to anyone that happens to come across my computer, please don’t turn it into the FBI. I’m really not a porn watching Satanist that’s looking for the perfect way to poison and dismember someone before feeding them to the crocodiles. I’m author doing vital research for my latest book.

Originally from Ohio, Julie always dreamed of a job in science. Either shooting for the stars or delving into the mysteries of volcanoes. But, life never leads where you expect. In 2007, she moved to Mississippi to be with her significant other.

Now a mother of a hyperactive red headed boy, what time she's not chasing down dirty socks and unsticking toys from the ceiling is spent crafting worlds readers can get lost it. Julie is a self-proclaimed bibliophile and lover of big words. She likes hiking, frogs, interesting earrings, and a plethora of other fun things.
And with the Kindling Flames series, she is now an Internationally Best-Selling Author.

What are 10 fun facts about you?