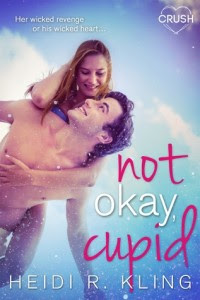 Her wicked revenge, or his wicked heart…

Felix James loves his life. Casual relationships. Loads of surfing. He’s as drama-free as they come. But he can’t stand by when his sister steals her best friend’s boyfriend, and the dude insists it was Hazel’s fault. So Felix vows to help turn Hazel into a girl her ex can’t resist—so then she can break his heart.

With an alliance in place, Hazel’s revenge is all but assured. But with each piece of payback, she feels a stronger attraction to Felix, even though revenge will turn her into a girl Felix could never be with. And soon Hazel has to make an impossible choice: revenge…or Felix, the boy who’s stolen her heart.

WARNING! This book contains betrayal, revenge, and that most tempting vice of all, the bad boy you know you can’t have.

WRITING BAD BOYS AND WHY WE LOVE THEM SO MUCH
by Heidi R. Kling


This is a total generalization, but I feel like many girls---myself included--are ‘fixers’ and there’s nothing more attractive than a gorgeous, broody boy who needs fixing! The notion (although quite absurd, really) that The Right Girl Could Fix the Broken Boy is something many of us (me included!) buy into. So while the darling boy-next-door who always says and does the right thing might be ideal in real life, or in the long run, the mysterious, unpredictable bad boy who shows up when he wants, does what he wants, but then gives you a little nugget of attention to string you along, is quite appealing. And when a girl succeeds in “taming” a bad boy it’s the ultimate triumph. (I’m speaking fictionally of course. I don’t think most “bad boys” are even that bad...they are just misunderstood. Here I go, buying into it again!

After earning her BA in Literature & Creative Writing Literature from UC Santa Cruz and finding her voice in YA, Heidi went on to earn her MFA in Writing for Children from The New School. She has directed and written children’s theatre on both coasts and lives with her husband and two children in Palo Alto, CA.

Read below for an excerpt from the book:


I watched in horror as Kimmy’s lips grazed Jay’s ear. He leaned back and laughed. What the heck was going on?

Kimmy’s hand was riding high up Jay’s shorts. High, high. Like top of thigh high. The kind of move that usually let me know a girl was ready to get down to business.

“Dude,” I said, because what else could I say?

Hazel swallowed. “Did you know about this?”

“Me? No way. Hell no. I’ve been looking for her all day, too. Look, Baze, don’t overreact. We don’t know anything. Who knows. He might have…lost a match and she’s…comforting him. Or his turtle died and they’re planning a eulogy together?” I was grasping and we both knew it, but I couldn’t stand to see that pained look on her face. “I once heard the best eulogy for a frog. It was amazing. It was all about the life cycle from tadpole to amphibian to…”

Hazel brushed past me and barreled toward them. It was no turtle eulogy, and I knew it. I mean, I didn’t know I knew it, but I knew the look of two people who were digging on each other, and those two were certainly all about the other one. God, poor Hazel.

Oh no. There she goes.

I had to follow her. I had to help.

“Excuse me,” I said to a group of three ladies in my way. Two of them grinned at me, one glared. The glaring one was a girl I’d forgotten to call back. I ducked, sheepishly, with a little apologetic wave, and came out on the other side.

I’d never even heard Hazel raise her voice, never mind cry. Never mind cry in public. But I didn’t need to use my astute Sherlock skills to see Hazel was on the verge of doing all three. She stopped close to Jay and Kimmy, like she was verifying what she was seeing was real.

One more intimate touch from Kimmy on Jay and that was it. Hazel moved in for the kill.

a #Heartbreak tank top that looks like this and was inspired by Not Okay, Cupid (as the series name for this book is High School Heartbreakers): https://shirtmeuptees.com/product/smu-02-hash?shirt_style=womenstank&customtext=heartbreak