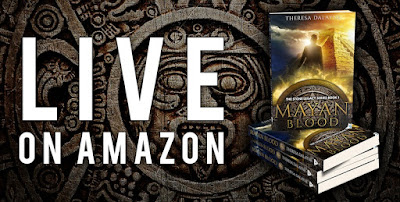 Read it for FREE with Amazon PRIME!

Their empires have fallen, but their mythology lives on…

Zanya Coreandero is a seventeen-year-old orphan with only a single friend and no hope for a normal life. Diagnosed with anxiety and night terrors, no one believes her cuts and bruises are a result of an evil entity, and not a brutal case of self-harm.

With the only home she’s ever known being the isolated institution—where breakfast is a handful of medications, the psychiatry sessions are mandatory, and her every move is watched—the only relief is her red-haired roommate named Tara, who’s more like a little sister than her best friend.

Free will is strong, but destiny is stronger.

When Zanya is kidnapped, she meets a group of gifted Mayan descendants, each with a unique ability. Gone from a nameless castaway to the only hope of mankind, Zanya is forced to make a grueling decision: bond with an enchanted stone and save humanity from rising underworld forces, or watch helplessly as Earth falls victim to a familiar dark deity from her dreams. This time, he’s playing for keeps.

A wicked secret hides behind a handsome face…

When Arwan, a dark-eyed timebender, takes interest in Zanya’s mission, it’s unclear if his intention is to help, or if he’s on a hell-bent mission for revenge. Wary of falling for another guy with major secrets and a tainted past, Zanya fights to keep her distance. If only her heart gave her a choice.

Tara may have spent years in an asylum, but that doesn’t make her crazy–just fearless.

Dropped in Moscow with a the group of enchanted Mayan descendants, seventeen-year-old Tara is forced to wait on the sideline while her best friend—the Stone Guardian— battles to reclaim a friend’s soul trapped in the underworld.

It sucks being ordinary when everyone else is superhuman…

A mortal girl with a tainted past, Tara is left to deal with an overwhelming sense of inadequacy. Her boyfriend, Peter, is a healer. Her best friend is The Guardian, and everyone else is a powerhouse of awesome strengths. Meanwhile, she struggles to leave her childhood of abuse in the past, and while Peter picks her up every time she falls, it becomes clear he deserves better.

When they opened Pandora’s Box, hell came pouring out…

When she’s given a chance to aid in the group’s mission, Tara is eager to pull her own weight, even if it means uncovering buried memories of being held prisoner by the underworld general. Now haunted with flashbacks of torture, Tara wanders from the safety of Peter’s arms into a city of depravity and corruption. And amidst all this evil is a young man with an agenda of his own, who leads her down a road that will either prove she is a hero at heart, or drag her into a world she’s always feared.

He wants revenge, she wants redemption. And in an underground ring of missing girls and bloody sacrifices, only the fearless can survive…

After living her entire life in an orphan asylum, Zanya fears she may actually be losing her mind.

Following the discovery of her ancient Maya bloodlines, eighteen-year-old Zanya Coreandero is faced with a daunting responsibility. She must protect the relic stone while Sarian, the underworld general, ceaselessly drives her to the brink of insanity.

With the approach of an ancient bonding ceremony, Zanya struggles to control her abilities—and her desires…

As the winter solstice approaches, it brings an onslaught of unexpected side effects. While Zanya struggles to seize control over her supercharged powers, she must also face an overwhelming suspicion that her boyfriend, Arwan, is hiding a secret so dark it could destroy them both. And with her powers finally taking root, the struggle to pace their relationship takes on a life of its own.

Just when she thought life couldn’t get more complicated…

With the arrival of a surprise houseguest, Zanya’s deepest fears about Arwan are confirmed. And when middleworld deities intercede, the group of gifted Maya descendants are confronted with hardships they never saw coming—including an enemy more deadly than they have ever faced.

Hell hath no fury like a woman scorned. And when that woman has no soul and a taste for revenge, they will need the powers of every surviving ancestor simply to stay alive.

GUEST POST
Zombie Apocalypse- Who would you want to team up with? With Theresa DaLayne
Ahhh, the Zombie Apocalypse. It’s a favorite subject of conversation among me and my friends, in my house, and oh, just while I’m sitting by myself, plotting my own survival plan.
The fact is, if you can prepare for zombies, you’re prepared for just about anything. And I give a lot of thought as to whom I’d bring into my “group.” Yeah, if Rick were here, I’d be the new Maggie. Don’t get me wrong, Michonne is kick-ass in so many ways, but I don’t know how to swing a sword, and she rocks those dreads way better than I ever could—so Maggie it is.
But aside from the fearless leader and myself, who else would I hand pick to trust with my life? And I’m talking real-life people. Friends and family. Who would I take, and who would I trip on the way out?
plays a role, and each role is equally important to keep the machine running, right?
I have a friend named Heather, who I’d definitely bring along. She can grow anything. Seriously. Anything. Her passion is identifying fungi and pruning wilted leaves from otherwise thriving plants. Once she gave me a Sex Ed lesson in the male and female flowers on her cucumber vine. Awkward, but interesting. So Heather, in.
My friend, Karen, knows almost nothing about plants, and cried when I took her horse back riding for her birthday. Not out of joy, mind you, but because she’d never touched a horse in her life and was terrified. She claims she would be vital for comic relief, but F-that. Comic relief won’t stab a zombie in the temple. But she is from New York and can throw a pretty mean right hook, so I figure her surly nature would make her a pretty good zombie slayer—whether she knows it or not. Karen, in.
My husband—of course—because not only is he pretty talented with a handgun, strong, and smart, but I could picture him being second in command. He knows people and can sniff out a threat from a mile away. Plus I’ll surely need a good snuggle when I come to the realization the world has gone to hell in a hand basket. Husband, in.
Lets just get my mom in there, too. Not only can she make a meal out of anything, but she’s my mom, so…can’t really leave her behind. Mom, in.
Speaking of relatives, my sister—who lives in Canada—would be an amazing addition. The only problem is, I’d have to get to her first. With no planes and limited car accessibility with cluttered highways and no gasoline, that would be a challenge. But her husband is totally into survival stuff, loves to camp, and I’m pretty sure would gnaw on a stiff squirrel if there was nothing else to eat. Plus, I may not step into the shoes of Michonne well, but my sister would rock a ninja sword with just a little practice. Sister, in. (And her husband in, too. He could be our tracker and survivalist.)
Education is important, even when the world has ended. I’d still want my kids to know how to read and write, so I’d definitely bring my friend, Zubaidah, who is a teacher. She’s also really strong and most likely has a zombie-killing beast laying dormant inside her somewhere. I could see her taking down walkers with a buck knife and zip line. Zubaidah, in.
Now that the group is getting bigger, I have to start being choosy about who I let in. We have a lot of who we need already. My question for you is, would YOU qualify to be in my group? Tell me why, and I may add your name to the list…

ABOUT THE AUTHOR
A long-time enthusiast of things that go bump in the night, Theresa began her writing career as a journalism intern—possibly the least creative writing field out there. After her first semester at a local newspaper, she washed her hands of press releases and feature articles to delve into the whimsical world of fiction.

Since then, Theresa has been married, had three terrific kids, moved to central Ohio, and has been repeatedly guilt-tripped into adopting a menagerie of animals that are now members of the family. But don’t be fooled by her domesticated appearance. Her greatest love is travel. Having traveled to over a dozen countries—not to mention an extended seven-year stay in Kodiak, Alaska—she is anything but settled down. Wherever life brings her, Theresa will continue to weave tales of adventure and love with the hope her stories will bring joy and inspiration to her readers.
WEBSITE * FACEBOOK * TWITTER * INSTAGRAM *
NEWSLETTER * GOODREADS