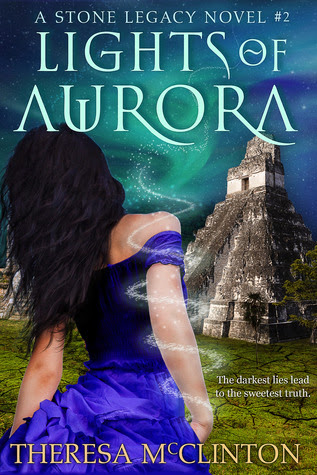 After the discovery of her ancient Maya bloodlines, eighteen-year-old Ashley Coreandero is faced with a daunting responsibility. She must protect the stone of Muuk’Ich while Sarian, the underworld general, relentlessly drives her to the brink of insanity.

As the winter solstice approaches, it brings an onslaught of unexpected side effects. Ashley must seize control over her supercharged powers, while dealing with the overwhelming suspicion that her boyfriend, Arwan, is hiding a secret so dark it could destroy them both.
With the arrival of a surprise houseguest, Ashley’s deepest fears about Arwan are confirmed. And when middleworld deities intercede, the group of gifted Maya descendants are confronted with hardships they never saw coming—including an enemy more deadly than they have ever faced.

Hell hath no fury like a woman scorned—but when that woman has no soul and a taste for revenge, they will need the powers of every surviving ancestor simply to stay alive.

EXCERPT
Ashley and Tara sat in Tara’s brightly decorated room, covered in Moroccan curtains, throw rugs, and satin pillows, all shimmering with silken threads. The curtains to the large double windows overlooking the rock garden were pulled aside, allowing moonlight to spill over them where they sat on the floor, lounging on oversized pillows.
They had been there for hours, just talking and enjoying each other’s company. It seemed like it had been forever since Ashley spent any real quality time with her friend, but with everything that had happened, the opportunities to rest and relax were few and far between.
They kept the conversation light and casual—exactly how Ashley hoped it would be. She had enough of dealing with drama. It was exhausting her in ways she couldn’t explain. Combined with training, her head was static and her muscles were sore. And even though she recovered faster than the others, it still took a toll.
“So how are you holding up?” Tara asked.
Ashley shrugged. “Okay, I guess. It’s a lot to take in, but I’ve gotten kinda used to that.”
Tara sat quiet while Ashley leaned against the wall and yawned, then glanced at a clock on her bedside dresser.
“I hope you haven’t been bored being in my room all this time.”
“Definitely not. I needed some Tara-time.” She smiled lightly. “I missed you.”
Tara nodded. Her red curls bobbed with the gesture. “I missed you, too.” She shrugged. “But it’s cool you’re back, and your mom, too. She seems…” Tara pursed her lips for a moment. “Mmm, different.”
Ashley sighed. “Yeah. Way different. I’m trying to get used to it, not that I ever really knew her in the first place.”
“But you wanted to.” Tara dropped her head. That simple gesture—the pain on her face—sympathized with Ashley’s years spent longing to know her mother.
Ashley shifted her weight on the big pillow. “It’s just that I thought about her so much when I was a kid, always wondering what she’d be like. Then when I met her, that image just stuck in my mind. And now…”
“She’s a stranger.” Tara understood her better than anyone did. “It’s okay for you to be disappointed. You did the best you could with what you had. Hell, you went to the freakin’ underworld to get Jayden’s soul back. There’s not many people who can say that. Even the chick from the scribe’s journal didn’t do it herself. You should be proud, and totally not guilty.”
Ashley played absentmindedly with a string from the pillow she sat on. “I don’t know. It’s just weird. Jay’s gonna be okay, which is awesome, and my mom is alive. So I really shouldn’t be complaining.” Ashley paused, watching her friend chew on her bottom lip. “What’s wrong?”
Tara’s head popped up. “I just...” She waited a moment before she continued. “I was just thinking about you and Arwan, but I wasn’t sure if I should ask.”
Ashley blinked, then lowered her gaze. “I just don’t know what to say. He seriously betrayed my trust. I’ll never be able to look at him the same way again.”
“You don’t think he deserves a second chance? I mean, I can kinda understand why he didn’t tell you.”
Ashley jerked her head up. “What?”
Tara shrugged. “Think about it from his point of view. He totally digs you, and he knew you probably wouldn’t like him anymore if you found out who he is.” She twisted a curl in her finger. “I mean, I don’t go airing my past out to every person I meet.” She ran her hand down her arm. “Not exactly proud of it, ya know?”
Ashley’s mouth went dry. “You were a little kid when that happened, and it’s not even close to the same thing. You can’t seriously be sticking up for him.”
Tara glanced at her apologetically.
“Unbelievable.”
“And you guys are destined to be together, right?” Tara sat up straighter, speaking with a sense of urgency. “Why not at least let him explain?”
“This is ridiculous. What would you possibly have to gain by—” Ashley’s shoulders slumped forward. “Oh, of course. I should have seen it sooner.”
Tara scratched her arm—a nervous itch she got when she was lying. Only this time it was different.
“Peter put you up to this, didn’t he?” When Tara didn’t respond, Ashley stood and looked down at her friend. “Listen. Tell Peter I appreciate the sentiment, but I’ll deal with my own love life.” She tugged on one of Tara’s curls to let her know she wasn’t completely pissed, then glanced at the time. “I have to go. I promised Jay I’d heal him tonight.”
“K,” Tara said softly, watching Ashley walk toward the door. “But…” Ashley turned around and waited for her to finish. “Pete’s a healer, and he said he can sense it.”
Ashley grabbed the handle. “Sense what?”
Tara’s brows furrowed. “Your broken heart.”

A long time enthusiast of things that go bump in the night, Theresa began her writing career as a journalism intern—possibly the least creative writing field out there. After her first semester at a local newspaper, she washed her hands of press releases and features articles to delve into the whimsical world of young adult paranormal romance.

Since then, Theresa has gotten married, had three terrific kids, moved to central Ohio, and was repeatedly guilt tripped into adopting a menagerie of animals that are now members of the family. But don’t be fooled by her domesticated appearance. Her greatest love is travel. Having stepped foot on the soil of over a dozen countries, traveled to sixteen U.S. states—including an extended seven-year stay in Kodiak, Alaska—she is anything but settled down. But wherever life brings her, she will continue to weave tales of adventure and love with the hope her stories will bring joy and inspiration to her readers