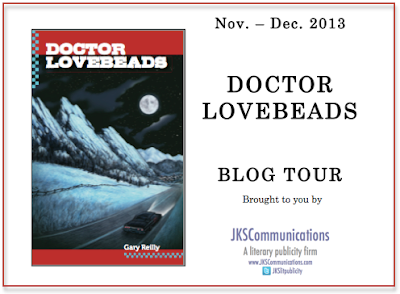 Hello, Therians!
Welcome to my stop in the JKSCommunications Doctor Lovebeads Blog Tour!! 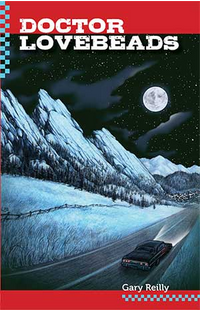 In Doctor Lovebeads, the fifth in novelist Gary Reilly's Asphalt Warrior series, Murph must go undercover to accomplish his mission. He lets his hair go untamed, dresses in muslin and sandals and arrives on the scene in a beat-up VW van called the Cosmic Wonderbus and Mobile Mercantile.

Murph tries to pass himself off as an old love child in his confrontation with Brother Chakra. As the good Brother might say, It's a mind-blowing trip.

‘Home for the Holidays’ and ‘Doctor Lovebeads’ by Gary Reilly hit bookstores Nov. 21

DENVER, Colo. – Back in the driver’s seat again, the cabbie who made readers laugh out loud in the first three installments of the posthumously published “Asphalt Warrior” series has returned for two more books written by best-selling author Gary Reilly.

Winner of the 1979 Pushcart Prize, Reilly passed away in 2011 after a two-year battle with colon cancer, trusting a pair of friends to publish an 11-book series after his death. Since then, the “Asphalt Warrior” series has been in the hands of Mike Keefe, a retired political cartoonist and Pulitzer Prize winner, and Mark Stevens, a former journalist and acclaimed author in Colorado. Following the successful release of the first three books – “The Asphalt Warrior,” “Ticket to Hollywood,” and “The Heart of Darkness Club,” which hit No. 1 on the Denver area bestsellers list – the two friends will publish two more books Nov. 21, 2013 in honor of Reilly through Running Meter Press.

Denver taxi driver Brendan Murphy, aka Murph, returns in Reilly’s fourth book, “Home for the Holidays.” It’s Christmastime, and Murph leaves his cab behind to visit his family in Wichita where he finds himself reluctantly reconnecting with his siblings. Meanwhile, Murph takes it upon himself to save an old friend from making the biggest mistake of his life – accepting a job where suits and ties are everyday attire.

In “Doctor Lovebeads,” Murph ignores the little voice in the back of his head that says to stay out of the lives of his passengers. Instead, he goes undercover as a hippie – muslin, sandals, VW van and all – to rescue two girls he believes have been brainwashed by a cult leader.


“A sardonic, well-read, authority-bucking character who cites Fellini and Dobie Gillis in the same passage, Murph…has a clear, winning voice,” Denver Post reviewer Tucker Shaw said in a story about “Ticket to Hollywood” being named as a finalist for the 2013 Colorado Book Award. 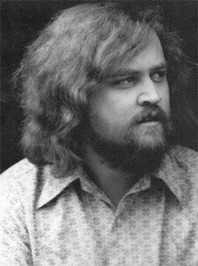 Reilly was born in Arkansas City, Kan., and moved with his family of seven brothers and sisters to Denver. He served two years in the army, including a tour in Vietnam as a military policeman, and later majored in English at Colorado State University with continued studies at the Denver campus of the University of Colorado. After publishing his short story “The Biography Man” and writing as an AOL comic advice columnist in the ‘90s, Reilly turned to novels. His dedication to writing did not include self- promotion. Instead of seeking agents and publishers, he focused on his craft, writing and rewriting, polishing to perfection. Proceeds from his book sales benefit Reilly’s longtime partner, Sherry.