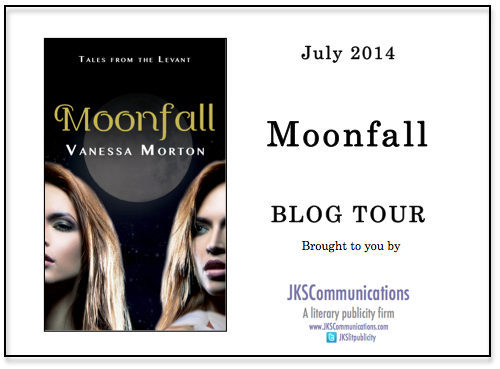 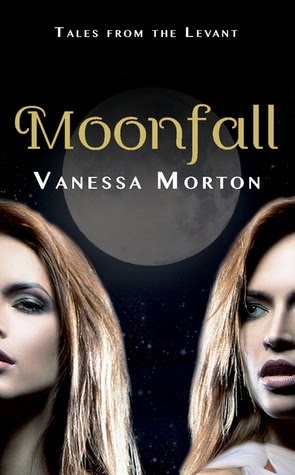 When 16-year-old Rachav drinks the Moon Temple’s forbidden wine, she hardly expects it to result in the death of a priestess. But when King Nur orders Rachav to serve the Queen of the Night—the kingdom’s powerful goddess—as restitution, Rachav’s identical twin, Zaron, has her own reasons for joining the priesthood and offers to take her twin’s place.

But choices have consequences.

Now Rachav’s family is in danger. As she uncovers the shocking reason why, she finds an ally in Salma, a brooding nomad who wields an ancient force powerful enough to destroy the entire kingdom. While the epic showdown rages above the city, Rachav plays a dangerous game of her own. Can she rescue her sister and right the wrongs of that fateful choice? Or will the king succeed and trap her in the doomed city?


“Moonfall: Tales from the Levant” (May 1, 2014, WEbook Publishing). The book paints a dramatic picture of twin sisters facing the unexpected consequences of their choices.


“Moonfall” creates a captivating and thrilling young adult story that weaves in the legendary – almost mystical – reputation that the city of Jericho has acquired over the millennia. To save her sister from torture at the insidious Moon Temple, 16-year-old Rachav allies with a mysterious nomad who wields an ancient force so powerful that it may destroy not only her sister’s captors, but the entire kingdom.


As entertaining as it is enlightening, “Moonfall” is rooted in history but touches on modern issues.


“Youth living in the Bronze Age struggled with similar issues – teen angst, political corruption, sibling rivalry, passion and the longing for a spiritual connection with our creator,” Morton says.


“‘Moonfall’ bridges the gap of time and culture and connects us with each other.”


The period and people become three-dimensional in her imagination.


“Vanessa Morton has infused Biblical history with fiction to produce a novel that brings to life the history surrounding Israel's entrance into the land of promise,” author Fay Lamb says.
“Peering inside both the camp of Israel and Jericho, the clash of societies meet, and God's promise is fulfilled. The author's imagination intertwines with fact and tells a story that is not soon forgotten.”


Morton was a semi-finalist in the prestigious Genesis writing contest in 2012 and 2013. When she’s not writing stories or exploring ancient ruins, Morton can be found with her husband and two daughters at their vineyard in east Texas.

Advance Praise for
“Moonfall: Tales from the Levant”

“There's a journey, there's danger, there's sibling interactions from rivalry to love, and there're political and spiritual threads throughout to keep readers riveted on characters and confrontations. It's a pleasure to see quasi-history reinforced with a believable scenario (naughty teens stealing something forbidden, caught, and paying for their transgression); and it's also satisfying to see ‘Moonfall’ evolve into a much wider story than that of simple teen rebellion.”
– D. Donovan, e-book reviewer for Midwest Book Review

“‘Moonfall’ by Vanessa Morton is written as an embroidered historical Biblical fiction, yet it reads as a fantasy and delves into the lives of previously unexplored individuals. A thoroughly enjoyable story that proves itself to be both authentic and engrossing – action packed as it was, by the end I was left wanting more.”
– Jennifer Sadler-Venis, Concourse Online

“Vanessa Morton has infused Biblical history with fiction to produce a novel that brings to life the history surrounding Israel's entrance into the land of promise.
Peering inside both the camp of Israel and Jericho, the clash of societies meet, and God's promise is fulfilled. The author's imagination intertwines with fact and tells a story that is not soon forgotten.”
– Fay Lamb, author of “Stalking Willow,” “Better than Revenge” and “Charisse”

“Through the lovely young Rachav's eyes, Vanessa Morton gives a stunning, accurately detailed portrayal of the life and times surrounding a real Biblical event in 1406 B.C. The fictional Rachav comes to life and represents women of courage and selflessness – from anywhere and any point in history – who accept and endure difficult challenges presented to them. With beautiful language and poignant storytelling, Morton inspires today's young women to be strong in faith and love.
Congratulations to this debut author on a satisfying and memorable read!”
– Cynthia T. Toney, author of “Bird Face”


This book was superbly written and I enjoyed every second of it. A stunning debut!

Check out all the stops on the Virtual Tour Page 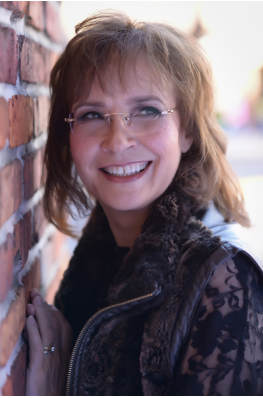 Her love of ancient history began in middle school when she spent a sweltering summer in the airconditioned public library reading Persian, Greek and Jewish legends. She earned a bachelor's degree in history from the University of Incarnate Word and studied writing at UCLA. She is living the dream – volunteering at and visiting various archaeological digs.
Morton contributes to the group blog The Scriblerians. In 2012 and 2013, she was a semifinalist in the prestigious Genesis writing contest.

“Moonfall: Tales from the Levant” is her debut novel, published by WEbook on May 1, 2014.

When she’s not writing stories or exploring ancient ruins, Morton can be found with her husband and two daughters at their vineyard in east Texas.