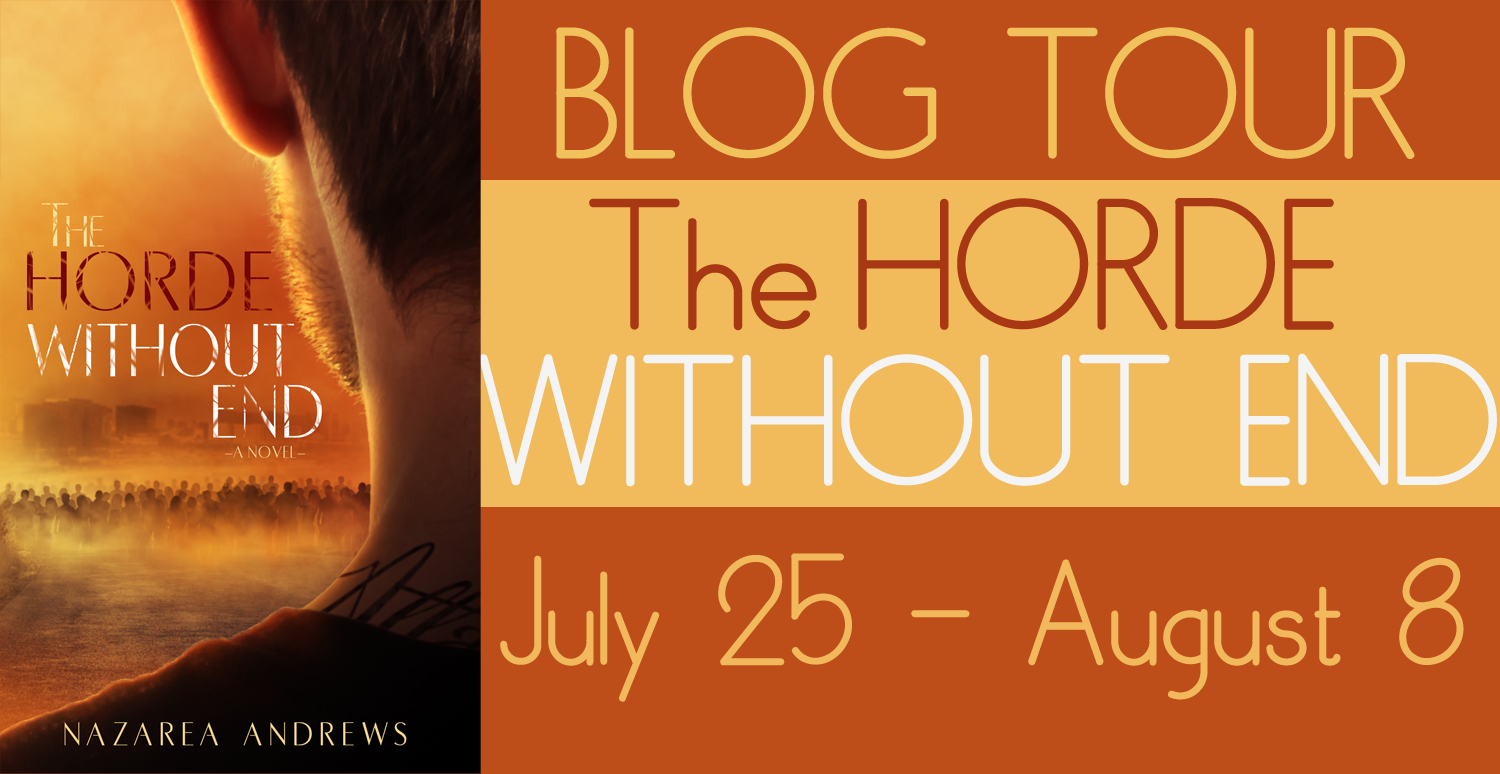 I am so excited to be a part of this Blog Tour for Nazarea Andrews' The Horde Without End, the sequel to her NA zombie romance, The World Without a Future.

If you missed my REVIEW earlier this week, check it out.

Also, be sure to enter to win a giftcard from Nazarea!!

It was supposed to be over…

Returning from Haven 18 was supposed to be the end. But nothing is ever easy—and in a world full of zombies, finding the missing is next to impossible. There are breadcrumbs. Tiny clues. But what are a few tiny clues in a world of the dead?

Nurrin is desperate to find her brother, but that will mean trusting Finn O’Malley. A man shrouded in secrets, who kills as easily as breathing. And the more she learns about him, the more questions she has. But she has learned one thing—the zombies are changing. Adapting. And this time, the Haven walls won’t keep them out.

Catch up with The World Without a Future, on sale for .99 NOW!


Today I have a fantastic BONUS SCENE for you guys :)
This is part two of Collin and Dustin's story, and you can read part one HERE!

The decision is easy to make. Executing it, however, is another thing entirely. Dustin looks ready to pass out, so he drops on the beat up couch. Collin ignores him, moving quietly around the Hole as he gathers the rest of what they need. Finally he pauses, and looks at Dustin.

“I’m going to secure a tether on the surface. Clear it out a bit—get ready to go.”

Dustin blinks at him, pain covering his face, and Collin has a moment to consider that killing him now might be the safest recourse.

He isn’t an infect—not yet, and as long as there is that slim chance of hope, he will hold onto it. Finn always laughed at Collin’s stubborn belief in hope and small chances. Hope will fuck you up, every time.

A grim smile turns Collin’s lips. He creeps along the edge of the cliff—he can hear zombies on the top, screaming and darting around. His right hand clenches down on the mess of bloody bandages as he shifts his gun slightly.

Collin is not as driven by violence as Finn. In their partnership, he is the one calm and cool. The voice of reason when O’Malley would wash the walls in blood. But after seeing his home fall to the horde, and his sister disappear with Finn, there is very little that will calm his temper now aside from blood.

A zombie screams again, a blood curdling wail, and Collin shifts, coming off the cliff path to crouch near the edge. It takes him three seconds to kill the first infect, and four for the others to realize he’s there. They shriek, bolting toward him, and he tosses the blood soaked bandages wide. It distracts two, and they plummet from the cliff, snapping at the bandages with mindless hunger.

Collin feels a small thrill of satisfaction as he empties his clip into the four infects charging him, putting them down with brutal efficiency, until he is all that remains.
That and Finn’s battered motorcycle.

Part three of Collin and Dustin’s story coming August 4th, so be sure to follow the Blog Tour so you don't miss a thing, and grab The Horde Without End today!!

Nazarea Andrews is an avid reader and tends to write the stories she wants to read. She loves chocolate and coffee almost as much as she loves books, but not quite as much as she loves her kids. She lives in south Georgia with her husband, daughters, and overgrown dog. She is the author of Girl Lost, Edge of the Falls, and The University of Branton Series.


A Life Bound By Books   Excerpt


Between fantasy and reality      REVIEW


In Between The Lines    REVIEW


In Between The Pages   Excerpt