I knew from the moment I first saw her she was the one. The only girl I could ever want.

The only girl I could ever love.

I’ve done too much.

She is my every dream.

I should be her every nightmare.

We come from different worlds. She’s…perfect. And I’m…

Somehow she wants me anyway. So we’ll grasp at what we can. We’re going to make this summer count. She’s my secret. And I’m hers.

The problem with secrets is they never last for long. And when others discover we’re together, they’ll do whatever it takes to keep us apart. All I know is: I won’t let them.

Because Reverie Hale? She’s mine. 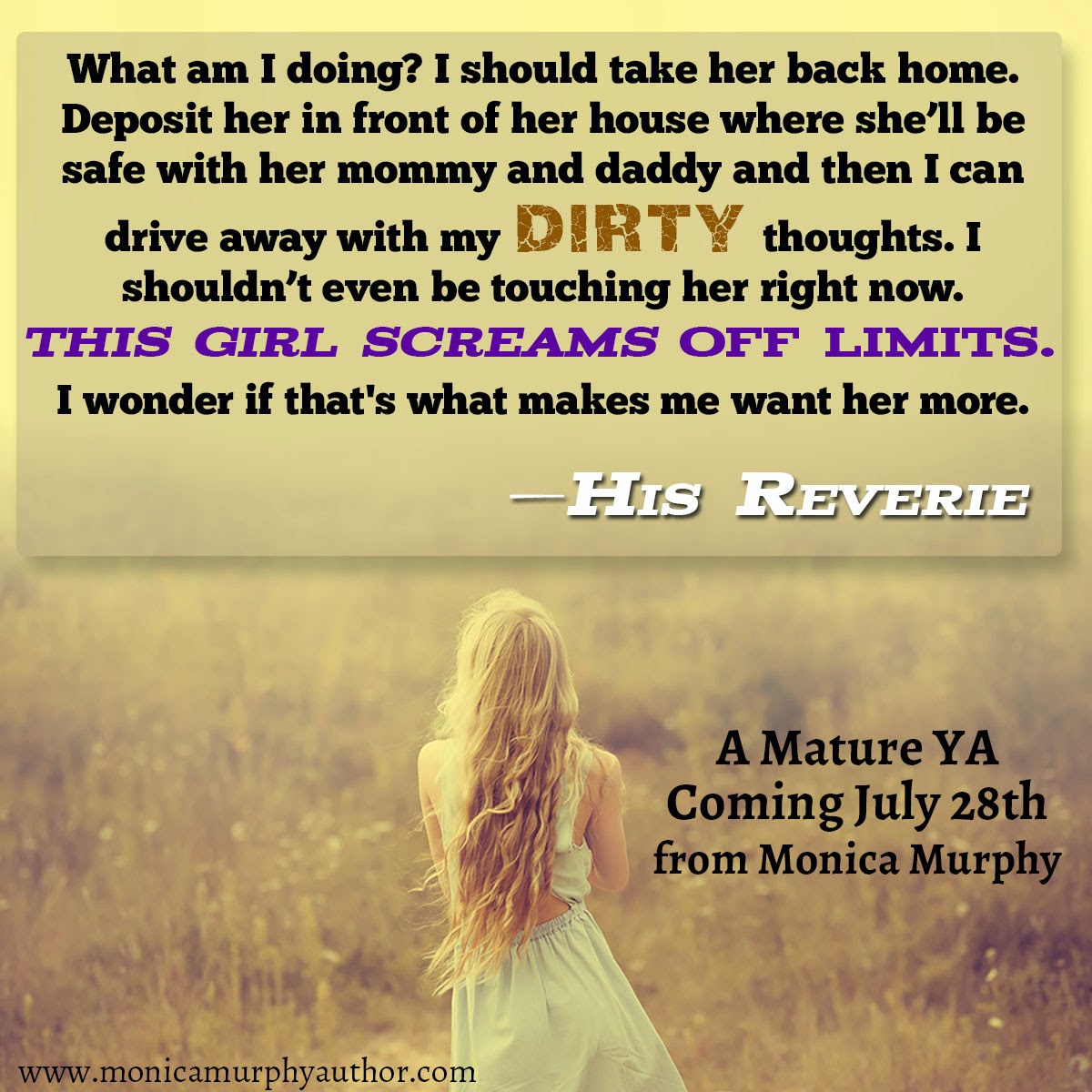 What HIS REVERIE Means to Me
by Monica Murphy


Let me tell you a little story about inspiration. Once upon a time, I was sitting around watching TV. A true crime investigative story as a matter of fact (ID Discovery channel, how I love you). I saw a story about a guy who was released from prison after being wrongly accused of a crime he didn’t commit.

Cue another night watching TV (I really don’t watch that much television, I swear). A show I recorded about the eighties. They brought up Jim and Tammy Faye Bakker – the televangelist and his wife who fell so horrifically from grace after spending way too much of their followers money (I remember something about an air conditioned dog house? Yikes). Their now adult son was interviewed and I thought hmm…what was it like to have the Bakkers as your parents?

This is how HIS REVERIE was born. Nick came to me first. Sweet, stubborn, always having to get up and dust himself off Nicholas Fairfield. Then Reverie came along and I thought, oh they would make a perfect couple.

And they did. I adored writing these two. I wrote this book for me, during a time when I was waiting to hear on other things business-writing-wise. I really had no time to write their book but there I was, happily typing away. And when I saw the cover Sarah at Okay Creations made, I was blown away. So beautiful I can hardly stand it.

So what do I hope the readers get out of Nick and Reverie’s book? I want you all to remember your first love. How hopeful you were. How sweet and sorta naughty it was. I know Reverie is a complete innocent and maybe drove a few of you nuts but I stayed true to the character I created. She really was that sheltered. She really had no clue about certain things. It was a lot of fun writing those diary entries.

But it was even more fun writing in Nick’s point of view. I’d always wanted to write an almost strictly male POV book and that’s what HIS REVERIE is. It is truly Nick’s book. I hope you love him as much as I do.

I immediately knew that I was going to love this book when my heart broke and I was in tears by the end of the first chapter. And, although this story has a serious undertone, I enjoyed the light, sweet romance between Reverie and Nick. I also really enjoyed how this story was delivered, with dual POVs, direct from Nick and through Reverie's most personal thoughts.

There were bound to be a few hurdles along the way for these two amazing characters but this story wasn't as intense as I was expecting it to be. As I said before, the romance was sweet, with just enough tension and plenty of chemistry. I enjoyed getting to know both characters. Nick was a genuine, good-hearted guy and even though he was afraid that his past would ruin things for him, his beautiful soul shone through time and time again. Rev was extremely likable. Her innocence was endearing and she was quite different from the norm. Sheltered and a bit spoilt, she surprised me from time to time and there was definitely more to her. I think Nick brought out the best in her but she still held onto what she believed in.

This story took a surprising turn, and I wasn't expecting the events that transpired towards the end of the story. It was shocking and heartbreaking. But once again Nick showed just how amazing and selfless he was. I just couldn't get over how abrupt this story ended, though. I had this whole scenario play out in my mind and I was just waiting for it to happen, and then that was it. THE END. I didn't think this was going to be a series, so I was pleasantly surprised to find out there would be more to Nick and Reverie's story, and I cannot wait for the next book, even though I suspect that plenty of heart-ache lies in store for them.