Hop on over to Open Road Media's Blog to find out what some of Richard Kirshenbaum's story time favorites were. 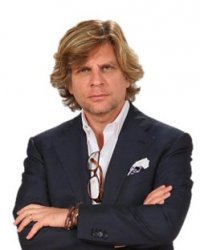 Whether he is helping to invent brands like Kenneth Cole, Coach, and Snapple or reinvent brands like Target, Jergens, Moët & Chandon, NetJets, Wendy’s and Avon, Richard Kirshenbaum has been successfully listening to his clients, creating a seamless creative process and creating truly new ideas throughout his entire career. And that has included everything from inventing fruit advertising by putting tiny Snapple stickers on fresh mangos, to creating the Hennessy Martini and hiring actors to order it in bars, to stenciling thought-provoking ads on sidewalks for a lingerie company.
Richard’s first breakthrough in the branding business was naming Internet provider Prodigy while at J. Walter Thompson and was the first creative person Donny Deutsch hired at Deutsch. Richard’s forward vision has helped invent and continues to redefine advertising in America and understand how to get brands into popular culture.
This dedication to breakthrough advertising has led to Richard being included in Crain’s “40 Under 40” and placed #2 on the list of Top 100 Entrepreneurs of the US for the Young Entrepreneurs’ Organization Award. He was also elected to the Board of Directors of the prestigious One Club for Art and Copy. All in addition to lecturing at Harvard Business School and regularly appearing in such media outlets as The New York Times, Wired, ABC, 20/20, MTV and CNBC. In 2003, Richard was named to the Advertising Hall of Fame and won the prestigious Jack Avrett award for public service.
Richard’s diverse interests include penning plays that have been produced by David Mamet’s Atlantic Theater Company, and co-authoring the book Under the Radar, Talking to Today’s Cynical Consumer with his partner, Jon Bond. His latest book “Closing the Deal,” a relationship help book for women, has been published in nine languages.
Richard is married to Dana and has three children, Lucas, Talia, and Georgia Rose.


MadBoy: Beyond Mad Men: Tales From the Mad, Mad World of Advertising
By Richard Kirshenbaum 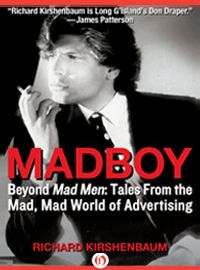 Richard Kirshenbaum was born to sell. Raised in a family of Long Island strivers, this future advertising titan was just a few years old when his grandfather first taught him that a Cadillac is more than a car, and that if you can’t have a Trinitron you might as well not watch TV. He had no connections when he came to Madison Avenue, but he possessed an outrageous sense of humor that would make him a millionaire.

In 1987, at the age of twenty-six, Richard put his savings on the line to launch his own agency with partner Jonathan Bond, and within a year, had transformed it from a no-name firm into the go-to house for cutting-edge work. Kirshenbaum and Bond pioneered guerilla marketing by purchasing ad space on fruit, spray-painting slogans on the sidewalk, and hiring actors to order the Hennessy martini in nightclubs. They were the bad boys of Madison Avenue—a firm where a skateboarding employee once bowled over an important client—but backed up their madness with results.

Packed with business insight, marketing wisdom, and a cast of characters ranging from Princess Diana to Ed McMahon, this memoir is as bold, as breathtaking, and as delightful as Richard himself.