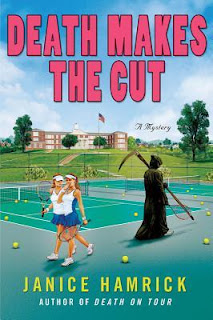 
The first bell of the new school year hasn’t even rung, and Texas high school teacher Jocelyn Shore is already at the scene of a murder. Friend and fellow teacher Fred Argus has been found dead on campus, and it isn’t long before the annoying, albeit attractive, Austin police detective Colin Gallagher uncovers evidence that Fred might have been selling drugs to students. Shocked by her loss as well as the insinuation that Fred was a dealer who got what he deserved, Jocelyn starts asking the kinds of questions guaranteed to set fellow teachers, administrators, and parents on edge.

With the school serving as the setting for a big-time director’s latest film, her investigation could hardly have come at a worse time. Jocelyn, however, finds clearing her friend’s name far more important than the needs of a pesky movie crew and doesn’t care who knows it. But it’s only when she’s attacked while on set that she realizes someone is determined to make sure the secrets hidden by Fred’s death remain hidden no matter what the cost.

This book was a quick, easy read, with an exciting murder mystery which kept me on my toes. Jocelyn Shore’s life turns upside-down the minute Fred Argus is found dead in the school tennis shed. After a rumor starts that Fred’s murder was the result of a drug deal gone wrong, Jocelyn makes it her mission to clear his name. This only leads to more trouble as she is thrown into a twisted web of lies, blackmail and embezzlement.
The story could have very easily become predictable but it didn’t. I was kept guessing every second of the way and I could never quite pinpoint who the perpetrator was. Each suspect was creepy in their own way, and they all seemed to have the means and motives for wanting Fred dead. When Jocelyn falls victim to a brutal crime, she wonders if it’s just coincidence or is it related in any way to Fred’s death, and if so, why has the killer’s attention turned to her? Could it have something to do with the note Fred left for her, or is her snooping causing more trouble than she expected?
I really enjoyed playing private investigator alongside Jocelyn. She is such a fun character. She’s witty and smart, and doesn’t hate herself in any particular way, which seems to be a trait of most characters these days. The only time she every really puts herself down is when comparing herself to Kyla, her cousin and BFF. Speaking of Kyla, she is just as fun a character as Jocelyn. The banter between the two was so real and I could almost imagine sitting right next to them as they spoke about men, guns and alcohol. Although Kyla can be a bit self-centered and rude at times, especially when she and Jocelyn are likened to each other, I still thought she was a wonderful friend in times of need.
On top of everything else Jocelyn has to deal with, she is forced to battle the feelings she develops for the gorgeous, "knight in shining armor" detective Colin Gallagher while still trying to figure out her long distance relationship with Alan Stratton. All I can say it that I’m Team Colin all the way.
This book is filled with many light-hearted moments which lifted the somber mood of something as serious as death, and I often found myself snickering. All in all this was an excellent read, very different from what I’m used to but a wonderful change.
It gets...

Thank you to St. Martin's Press for giving me the opportunity to read and review Death Makes to Cut.