Stop over at Open Road Media's Blog to find out why A.A.Mine was Susan Morse's favorite childhood read.
About the Author: 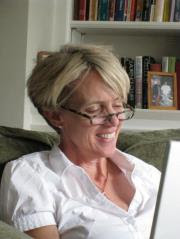 Other than two years in Ireland in the sixties and a stint at a Newport Rhode Island boarding school during my teens, I spent most of my childhood in Philadelphia, where I was born in 1959. I majored in theatre and French at Williams College and then moved to New York, planning to become a wildly sought-after actress specializing in the classics. This got me as far as an off-off-off theatre in the Bowery, where I played Lady Macbeth for six heady weekends. (Most nights our cast outnumbered the audience, which worked well because it made my sleepwalking scene particularly spooky.)
I met my husband David in 1981 across the bar I was tending near his apartment in Hell’s Kitchen. It may have been foolish, but I agreed to go on a date almost immediately, which, due to conflicting schedules, meant I had to see him in a play (this turned out to be sort of convenient, as it gave me a chance to figure out his last name by checking the playbill). Not long after his first entrance, I decided it would be best to marry him as quickly as possible.
I studied Meisner technique at the William Esper Studio, and we then moved to Los Angeles for David’s work. Over a six-year period I managed to build up a bit of a resume – small movies, television, and plays. I was George C. Scott’s daughter on Mr. President, Colleen Dewhurst and Candice Bergen’s sparring partner on Murphy Brown, Peter Riegert’s one-night stand on The Twilight Zone, and somebody’s dead lesbian lover in an episode of Hotel. I ran a program on the side teaching horseback riding to disadvantaged kids, and I became a member of a theatre company, Circle Rep West. After we had our daughter and twin sons, things got complicated: Roused in the night by the Northridge earthquake in 1994, we found we had to leave our ruined house for good. So, within weeks, we landed back East in Philadelphia. Because I had always loved to read, I stopped acting and began editing books, freelance.
A few years ago my elderly mother got sick and we had some outrageous adventures trying to get her stabilized. It was stressful. I emailed nightly update rants to my siblings, and it turned out they were entertaining in a warped sort of way. A sister told me I had a book, and so I began to collect notes in earnest, becoming more and more amazed at the classic arc that unfolded. It wasn’t just that my mother decided to drop everything at one point and become an Orthodox Christian nun. We had a damsel in distress (actually two, if you count me), a villain, a chivalrous knight, a whole background cast of those bumbling peripheral characters you get in Shakespeare and Chekhov, and even a stunning deus ex machina twist at the end. All I had to do was carry around a notebook, convince my mother her rectal cancer nightmare was worth sharing with the masses, and try to come up with a catchy title: The Habit.

The Habit By Susan Morse 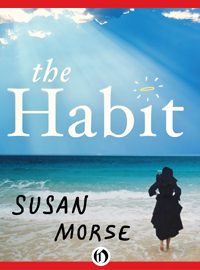 There is an unmistakable gleam in Ma’s eye, and her absolute composure both appalls me and rips my heart from its root. I burst into tears. The gauntlet is thrown.

From the time she was conceived, Susan Morse was her mother’s “special” child. For Susan, special translated into becoming her incorrigible mother’s frazzled caretaker, a role that continued into adulthood. Now she finds herself as part of the sandwich generation, responsible for a woman whose eighty-five years have been single-mindedly devoted to identifying The Answer To Everything. And, this week’s Answer looks like it may be the real thing.

Susan’s mother is becoming a nun.

Mother Brigid is opinionated and discerning (Don’t call them trash cans. They’re scrap baskets!), feisty and dogmatic (Stop signs and No Parking zones are installed by bureaucratic pencil pushers with nothing better to do), a brilliant artist (truly, a saving grace), and predictably unpredictable, recently demonstrated by her decision to convert to Orthodox Christianity and join its holy order. Dressed in full nun regalia, she might be mistaken for a Taliban bigwig. But just as Mother Brigid makes her debut at church, a debilitating accident puts her in a rehab center hours from Susan’s home, where Susan’s already up to her neck juggling three teenagers, hot flashes, a dog, two cats, and a husband whose work pulls him away from the family for months at a time. Now Susan gets to find out if it’s less exhausting to be at her mother’s beck and call from one hundred miles away or one hundred feet. And she’s beginning to suspect that the things she always thought she knew about her mother were only the tip of a wonderfully singular iceberg.

In this fresh, funny, utterly irresistible memoir, Susan Morse offers readers a look at a mother-daughter relationship that is both universal and unique. For anyone who’s wondered how they made it through their childhood with their sanity intact, for every multitasking woman coping simultaneously with parents and children, for those of us who love our parents come hell or high water (because we just can’t help it), Susan Morse’s story is surprising, reassuring, and laugh-out-loud funny. A beguiling journey of love, forbearance, and self-discovery, The Habit introduces two unforgettable women you’ll be glad to know—from a safe distance.