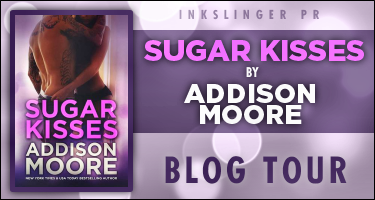 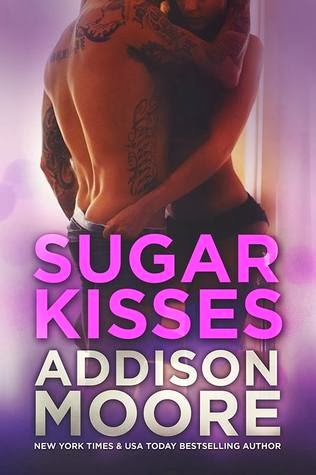 Roxy Capwell couldn’t be more miserable. She just had her heart stomped on by her cheating boyfriend, and the last thing she’s looking for is love. She hates men.

Cole Brighton couldn’t be happier. He’s a player of the highest order, there’s not a girl at Whitney Briggs University that he can’t tag and bag. He loves the ladies.

Roxy’s dream is to own and operate her own bakery one day, but with no oven in her dorm, and a lucrative baking competition on the horizon, she agrees to move in with her best friend’s brother, the obnoxious, womanizing, Cole Brighton.

Between the heavenly scent of baked goods, and Roxy’s perfect body strutting around the apartment, Cole can’t think straight. So when Roxy’s ex starts sniffing around again, Cole volunteers to play the part of her new boy-toy and things get heated both in and out of the kitchen.

Roxy discovers she might not hate every man on the planet, and Cole discovers nothing tastes better than Roxy and her late night SUGAR KISSES.

Roxy is ball of stress and anger.
Cole is all ego and sex.
Their attraction is unstoppable.
And when their bodies collide—it's combustible.

Roxy’s POV
“Shut up and kiss me.” I pull Cole in by the back of the neck, slamming my lips to his, and I go for it. I swallow him whole, swirl my tongue around his mouth as if I were taking up residence, then something in me loosens, and I surrender as he digs his fingers into my waist, his tongue roaming freely in my mouth, slow and deliberate. A soft moan gets locked in my throat as I wrap my arms around his neck and press my body up against the wall of granite that is his chest. It’s as if I had found a wormhole in this desperate universe I’m wallowing in, and now I’m transported to some fantastical place I’ve only heard about, and, ironically enough, the portal was right here through Cole’s mouth.
***************************

(Cole’s POV at the apartment)


Roxy sways her head over her neck as a light moan escapes her. Her eyes are glazed over with a lustful look that’s just this side of feverish. Her mouth covers mine, and I don’t fight it. I’m in, and Roxy can have me any way she wants. We’re all tongues and teeth, heated breaths, and groans for a small eternity.
Roxy finally curls into me until we’re spooning right there on the floor.
“I’m sleeping with you whether you like it or night,” she purrs.
I wrap my arm around her because I happen to like it a hell of a lot. 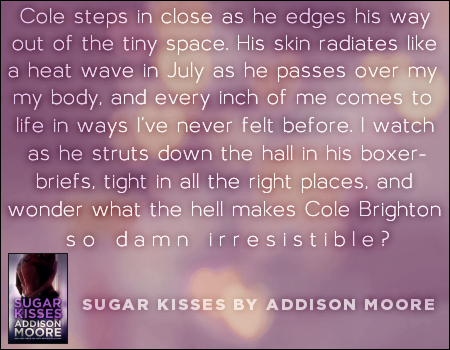 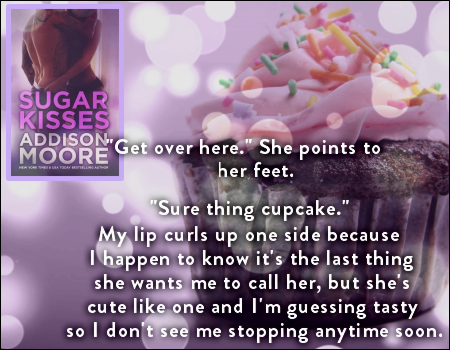 ABOUT THE AUTHOR
Addison Moore is a New York Times, USA Today, and Wall Street Journal bestselling author who writes contemporary and paranormal romance. Previously she worked as a therapist on a locked psychiatric unit for nearly a decade. She resides on the West Coast with her husband, four wonderful children and two dogs where she eats too much chocolate and stays up way too late. When she's not writing, she's reading.