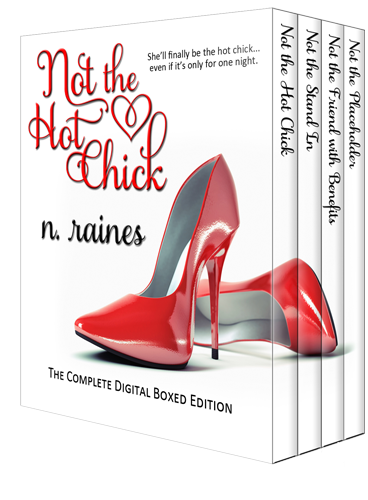 Sign up for Nona Raines’s newsletter and get the first book (Not the Hot Chick) in the series for free!
Please sign up here: http://eepurl.com/bYePvP

Can she be the hot chick for just one night?
No one would call curvy Layla Messner hot. Sweet and smart, yes, but not hot. She doesn’t stand a chance with Cam, the sexy bartender with the teasing grin—especially since her neighbor Jessi has him dead in her sights. Jessi, who is every man’s centerfold fantasy. All Layla has to look forward to is another night with her trusty vibrator.
But when his hook up with Jessi tanks, Cam looks to Layla. He wants her. Here’s her chance to take what she wants and finally be the object of desire—the Hot Chick. If she says no, she may regret it forever. If she says yes, one night may not be enough.
Please note this is a serialized romance. Not the Hot Chick is Book 1 in the series.

Goodreads / Amazon / Kobo / iBooks / AllRomance
EXCERPT FROM BOOK 1
Jessi Wallace eyed the cute bartender’s butt the way a hungry cat might eye an unsuspecting bird. She actually licked her lips. “I am so going to do him.”
Layla Messner held back a sigh, took another sip of her lemon-drop martini, and asked herself for the sixth time that night, Why am I here, again?
She should have known better than to accept Jessi’s invitation to go out tonight. They weren’t really friends, just across-the-hall neighbors in the same apartment complex that housed many of the Buff State students here in Buffalo, New York. She and Jessi would nod and smile when they passed each other, occasionally stop and chat, but they’d never partied together. So it had been quite the surprise when Jessi tapped on her door two hours ago with a smile and an invitation: “Feel like cutting loose tonight?”
Silly Layla, thinking Jessi was trying to be friendly. More likely, she just wanted a wingman—or wingwoman in this case—and had no one else to step out with.
Jessi leaned over the bar provocatively in her low-cut top, calling to the bartender and pointing to her empty glass. “Can I have another down here?”
Oh, God, she was actually batting her eyelashes. And the way she was leaning to flash her cleavage, it was a wonder her boobs didn’t fall right out onto the bar.
Layla glanced down at her own chest, pulling back her shoulders. Her boobs weren’t so bad, even if they weren’t shown off as blatantly as Jessi’s. Layla knew she had nothing to be ashamed of in that department. If anything, she’d been generously blessed.
The problem was, she was a little too blessed in other areas as well. “Curvy” would be a kind description. “Chubby” might be more to the point.
Jessi, on the other hand, had a body that was every guy’s wet dream. She had big breasts and a tiny little waist that curved out to a rounded pair of hips. The tight, short skirt she wore had every guy in the room craning his neck for a second look at her ass.
The place was pretty quiet for a Friday night. But then again, it was the weekend before spring break, and much of the college-age crowd that usually frequented the Shamrock had already left town. Layla had a four-hour drive to get to her parents’ house and was wiped from spending the day with a class of hyper first graders. Morning would be soon enough to make the trip home.
The bartender ambled down their way and gave them both a smile. “Ready for another, ladies?”
Layla’s heart warmed at the way he included her in the offer. He didn’t just ignore her, the way some guys did, to focus on her prettier companion.
Jessi smirked and tapped the rim of her glass. “I’d like another Hard Fast Screw please.” She practically purred the order for the Shamrock’s variation of a screwdriver.
“You got it.” He directed his gaze at Layla, and her heart gave a little flip. It was too dark in the bar to tell what color his eyes were, but she knew they were beautiful. Just like the rest of him. Dark hair, a buff body, and a gorgeous face. High cheekbones, a straight nose, chiseled lips. Those lips moved, but Layla was too mesmerized by his looks to pay any attention to what he was saying.
She blinked. “Uh, excuse me?”
“He asked if you want another drink.” Jessi’s cutesy moves were forgotten as she gave Layla the death stare. Don’t poach on my territory.
As if. Still, a girl could dream, couldn’t she? 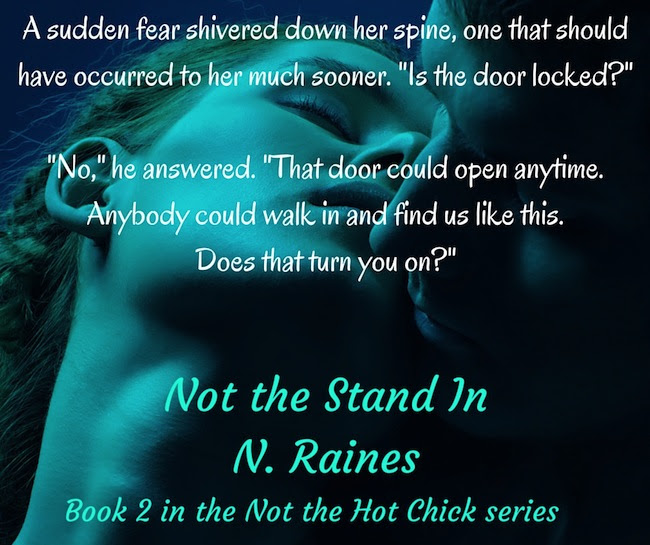 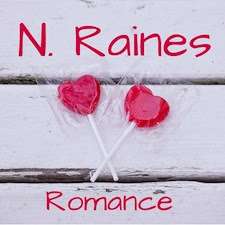