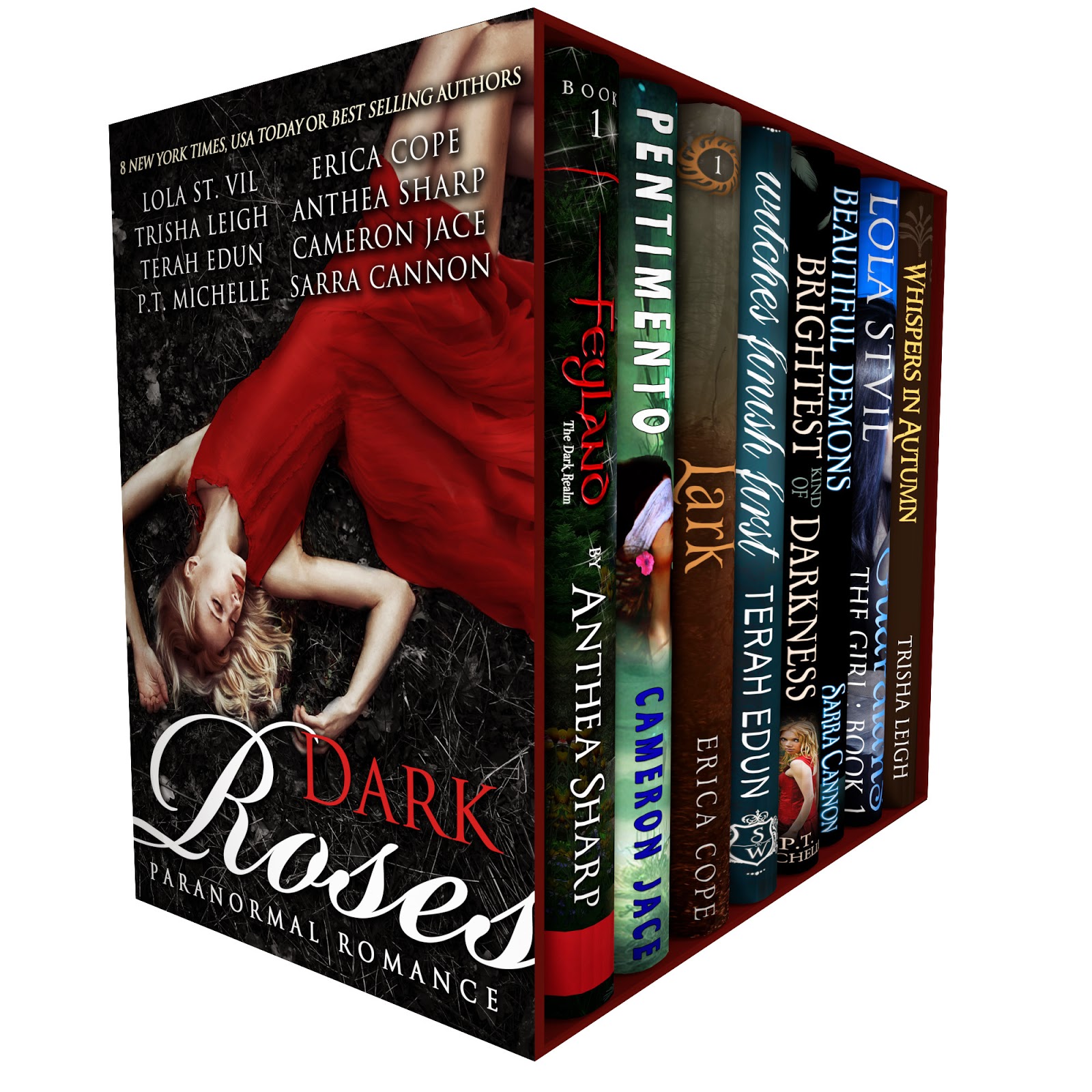 
Eight bestselling authors. Eight stories of paranormal romance. Eight series to take your breath away. From kick-ass cheerleaders to leaders of the fae, these teenage girls are out to save their worlds, one unforgettable adventure at a time. The only thing standing in their way – love, loss & a little magic.

From NYT & USA Today Bestselling author, P.T. MICHELLE – BRIGHTEST KIND OF DARKNESS — Nara Collins is an average sixteen-year-old, with one exception: every night she dreams the events of the following day. Due to an incident in her past, Nara avoids using her special gift to change fate…until she dreams a future she can’t ignore.

From USA Today bestselling author LYLA PAYNE, writing as TRISHA LEIGH – WHISPERS IN AUTUMN — For sixteen years, Althea has been alone in her ability to feel emotion, to think for herself, and on occasion, light things on fire. The autumn brings a boy named Lucas to town, along with unwanted scrutiny from the alien race of Others that rule Earth, and if she wants to live to see winter Althea will have to stop hiding–and start fighting

From USA Today bestselling author, ANTHEA SHARP – FEYLAND: THE DARK REALM — Jennet Carter never thought hacking into her dad’s new epic-fantasy sim-game would be so exciting… or dangerous. But behind the interface, dark forces lie in wait, leading her toward a battle that will test her to her limits and cost her more than she ever imagined.

From bestselling author, LOLA ST. VIL – GUARDIANS: THE GIRL — The prophecy says “should human and angel unite, it will bring the end of the human race…” Yet Emmy & Marcus can’t fight their feelings. All they want is to be together; the only way for us to survive is to keep them apart…

From bestselling author, TERAH EDUN – WITCHES FINISH FIRST — Witch. Daughter. Queen. Katherine is second-in-line in a provincial town ruled by her coven. But she’s about to learn that the hierarchy of witches first, fae second, and humans last isn’t set in stone…at least not in high school.

From bestselling author, ERICA COPE – LARK — An ordinary girl. An ordinary life. Until her Elfin heritage comes to light. Mia Carrington discovers she’s the heir to the kingdom of Álfheimr in the most unexpected way. But it’s the Dark Elves that pursue her that have her world turned upside down, because they will let no one and nothing stop them from claiming her.

From bestselling author, CAMERON JACE – PENTIMENTO — On her seventeenth birthday she comes of age. Her seventeen birthday is also the day the Beasts come for her. After the destruction of the world these rulers of new America provide safety and services to human in exchange for one new teenage girl every week. They call them the Brides, and they never come back.

From bestselling author, SARRA CANNON – BEAUTIFUL DEMONS –
Harper Madison’s inability to control her extraordinary powers has gotten her kicked from countless foster homes. Shadowford Home for Girls and Peachville High are her last chance. But when evidence ties her to the gruesome murder of a Demons cheerleader, Harper discovers this small town has a big secret. 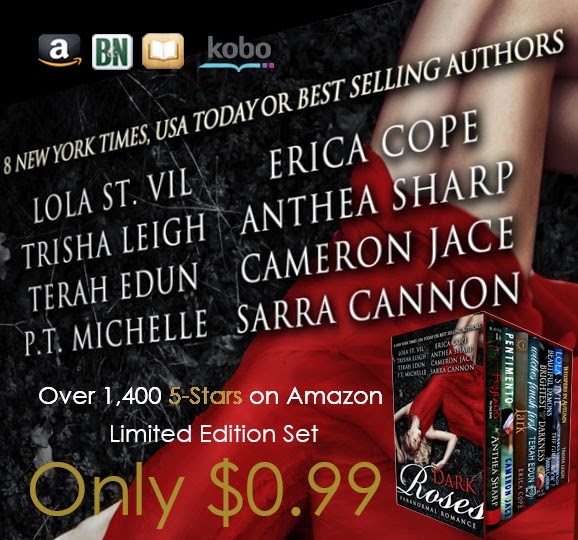 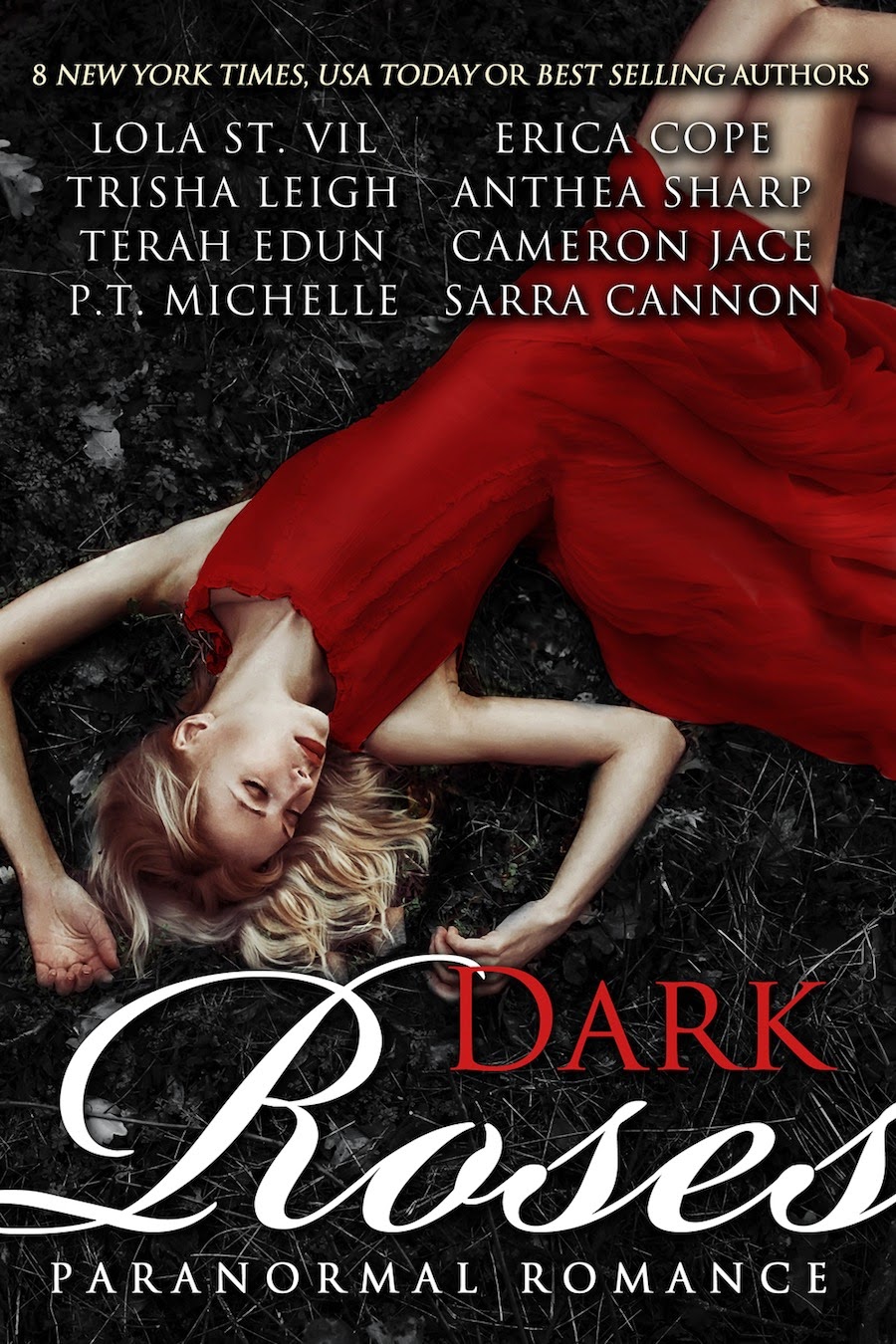 AND, HERE ARE A FEW EXCERPTS TO ENJOY :)

Excerpt from
BRIGHTEST KIND OF DARKNESS


Once we'd stowed my stuff in the back of my car, Ethan opened the car door and waited for me to get in. Even though I wanted to ask him so many questions, I was afraid to speak. It felt like we'd moved to a whole new level in our friendship, but I wasn't sure what that level was.

Every nerve ending urged me to hug him, to show my appreciation, but I was unsure. Would he pull away? I didn't need any more rejection in my life. "Thank you for being there," I said in an unsteady voice.

Ethan clasped my wrist and pulled me into his arms, holding me close. "I'll always be here for you."

I shuddered against his chest, mumbling into his flannel shirt. "You weren't at school and I didn't see you after practice. I thought for sure no one would hear me scream when those guys finally got their hands on--"

Warm fingers tilted my chin up. "I had something to do today, but I'd never leave you hanging. When I saw your stuff on the field and then I heard a guy yelling, 'She went this way,' in the woods..." he paused, tensing. "I freaked."

"You got to me just in time." I tried to smile but my lips trembled. "Who knew knights wore flannel shirts and Led Zeppelin tees?" I knew I sounded like a goof, but I didn't care. I wanted him to know how much his rescue meant to me.

Ethan leaned close and I closed my eyes as he lightly kissed my cheekbone, then my forehead. He had no idea that his gentle kiss had melted something inside me, how much I craved the physical connection. His warm lips lingered against my skin for a second before he took a step back and shoved his hands in his jean pockets.

The tone of his voice turned my body to melted chocolate. I steadied myself against the wall, afraid that if he moved any closer, I really would melt. I felt his nearness in my bones, a vibration of warm, flushed energy.

“You better get inside,” he said, checking his watch even though it was probably too dark to see the time. The way he raised his arm and leaned forward brought his chest so close to me, I wanted to run my hand along the rippled muscles I felt certain I would find underneath his black t-shirt. “It’s way past your bedtime.”

My heart beat so hard in my chest my ears were filled with the loud thumping sound of it. I dipped under his arm and pushed open the barn door, grateful for the refreshing rush of cool, night air.

“Your secret’s safe with me,” Jackson said. He drew an X over his heart as I ran toward the house, disappearing into the shadows.


Excerpt from
GUARDIANS: THE GIRL

She looks at me. She has no response. There was nothing she could have said that the two of us didn’t already know. I take her hands. She had started crying. I wipe her tears away with my hand.
“I can’t save the world, Marcus. I’m not strong enough.”
“You can’t save the world, you don’t know the world. So you have to focus and narrow it down to the people you do know—your mom, your uncle, your neighbors. You have to fight for the people that you love. You. Have. To. Fight.”
Excerpt from
LARK

He runs a hand through his hair, but the waves fall right back to their disheveled state. The glow from the torch reflects off his hair, causing its already coppery hue to glow like embers. He is actually quite attractive. His features are angular but in a perfect sort of way. His skin is surprisingly freckle free considering the auburn color of his hair. He actually has a better tan than me. His pretty green eyes are framed by dark eyelashes most women would kill for. And he has full, kissable pink lips.
He’s actually sort of swoon-worthy.
A vision of Grey pops in my head and I feel guilty. Which is ridiculous for so many reasons. What the heck, Mia? I mentally slap the boy-crazy girl out of my head. Greyson and I are just friends, and this Jacoby character, regardless of how dreamy he may appear, is aiding and abetting my captivity. Not exactly the kind of guy you want to bring home to meet mom.
“Mia, I'm not going to bite.” He gently pats the spot right next to him again. I finally concede and sit down as far away from him as possible, which isn’t far on the narrow cot, and take my less than appealing breakfast while trying to appear grateful. I actually am a little hungry. I take a small nibble of the toast and it's not terrible, so I take another bite.
“There. That is much better. I would hate to see you starve to death.”
“Why do you care anyway?” I finally say.
“Well, let's just say that I don't agree with keeping anyone, especially pretty girls, against their will. I would much rather they make the choice to be in my company, but since you are here anyway, I figure we better make the most of it.” He winks at me again.
“Is there something in your eye?”
“No, why?” He asks with a bemused expression.
“Then stop winking at me. It’s annoying.”
“Beautiful and feisty,” he mutters to himself. “I might never leave.”