I'm exciting to be featuring Frederick Lee Brooke's, Collateral Damage, today.
This is the thrid book in the Annie Ogden Mystery series.

There's a fantastic giveaway hosted by Novel Publicity! So don't miss out on your chance to win a $50 Amazon gift card or an autographed copy of Collateral Damage! 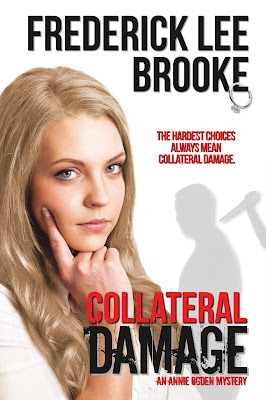 When Annie Ogden’s ex-boyfriend Michael Garcia reappears, she has to confront a lie dating back to her time in Iraq. Will she go back to hot, passionate Michael, who has developed a disturbing interest in meth, or stick with her pudgy PI partner and fiancé, Salvatore? The calculus changes when Michael is arrested for murder. When Salvatore refuses to help investigate, Annie is forced to try to find the killer herself. Meanwhile her sister’s creepy husband, Todd, is making more of an ass of himself than usual. Annie's problems with three obsessive men suddenly pale in significance when she realizes the killer has set his sights on her. Having changed his mind about helping her, Salvatore finds himself in a desperate race against time, the only man capable of finding the killer before it’s too late.

Get Collateral Damage through Amazon. 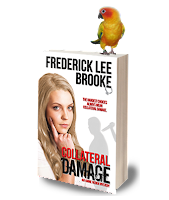 I was really excited to read this book because I loved, Zombie Candy, so much. Brooke has a way of getting into the female psyche like no other man ever has, and he writes endearing and believable characters. He also puts them through their paces, and throws in some bizarre occurences, adding to the intrigue.

This book certainly had me entertained from the very beginning. Annie is such a strong female MC, so I was a little surprised when she so willingly allowed Micheal to take over her life. I understand the shock of having him return, especially with his sudden devotion to her, but I would have expected her to kick his ass to the curb, not matter what emotions his return evoked. Okay, so she didn't just fall into his arms, she was adamant that she was with Sal, but some of her actions just made me want to reach into the book and slap some sense into her.

I wasn't really sure where this story was going, but the minute murder stepped in, the entire game changed. The plot thickened with each turn of the page and as certain revelations were made, so the suspense grew. I was on the edge of my seat, just waiting for that moment when the bubble would burst and all the crazy theories circling my brain would start to makes sense. But, boy, oh boy, was I blind-sided. The perp was a real sleazeball but never had I imagined the part he'd truly played in this tale of lies and deception. Quite the shocker.

Brooke skillfully crafted a story full of excitement and intrigue, giving just enough away to keep me wanting more, but never to the point where I, for one second, thought a really knew what was about to happen.

This book will delight readers of murder mysteries.

Who doesn't love prizes? You could win one of two $50 Amazon gift cards or an autographed copy of Collateral Damage!

Here's what you need to do...
That's it! One random commenter during this tour will win the first gift card.

The other two prizes will be given out via Rafflecopter. You can find the contest entry form below or on the official Collateral Damage tour page via Novel Publicity. Good luck! 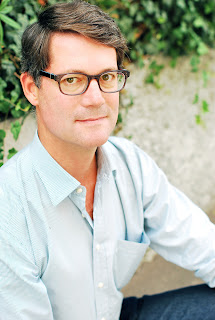 Frederick Lee Brooke is the author of the widely-acclaimed Annie Ogden mystery series, which includes Doing Max Vinyl, Zombie Candy, and Collateral Damage. The books do not have to be read in order. Having lived in Switzerland for the past two decades, Brooke has taught English, run a business and learned French, German and Italian.