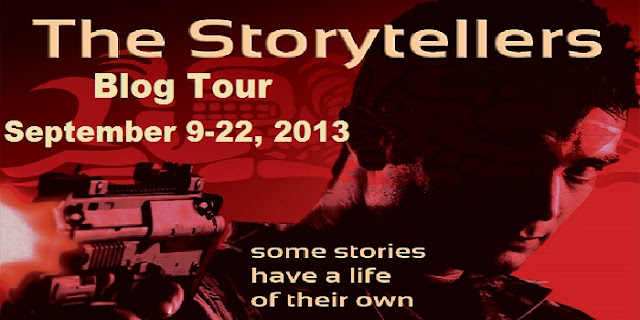 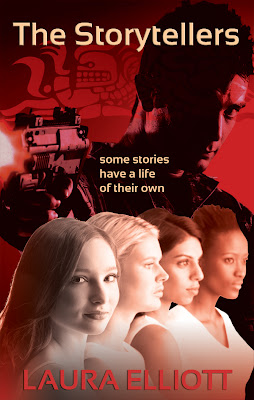 Four storytellers
One ancient demon
No way out…
Four women who call themselves The Storytellers have gathered one hot August evening to tell tales, as they have for years. But on this night, they unknowingly evoke the powers of an ancient Mayan idol that breathes real life into their stories. The Mayan idol isn’t the only ancient being awakened. A power-hungry demon is determined to see the women fail and become enslaved to him forever.
Now the women’s lives depend on surviving each other’s stories, defeating the demon and solving a centuries-old mystery.
If they survive until The End untold wealth is theirs. But some stories have a life of their own…

Raiders of The Lost Arc meets Thelma and Louise in this romantic suspense novel where four storytellers unknowingly evoke the powers of a Mayan idol that breathes real life into their stories. Now the women’s lives depend on surviving each other’s stories, defeating an ancient demon and solving a centuries-old mystery. But some stories have a life of their own…

Grab a copy from Amazon today!


Why I write paranormal


by Laura A. H. Elliott
Hot demons, curses, treasure, and romance, what’s not to like about writing paranormal? There are times when I’ve had enough of reality, or at least question it. I usually like to escape when I write, read, or watch movies. Paranormal is what I crave as a reader, watcher and writer because it’s fun and I get to use my imagination in ways that make me happy.
A question I get asked all the time at book festivals or at school talks or just by friends is what is paranormal? A few times I was taken by surprise at the question. For me it’s kind of like having to describe chocolate. This is how I think about and go about writing paranormal (and magical realism, since I write that too). I like to find magic in the every day, like I do on my blog Laurasmagicday. In life there are the things we see and feel, but our eyes and ears can fool us. The unseen has a direct effect on our lives. That’s why I like to take these unseen, very real aspects of our every day world, and kick them up a notch in my writing.
In THE STORYTELLERS, I take these concepts of the unseen further. Four friends write four stories that all come true for each other. The concept is that stories have energy. In this world the energy of fiction becomes reality. In WINNEMUCCA, a small town fairy tale, I have a young girl awaken to her intuition for the first time by taking an enchanted road trip where her intuition is given a voice through the questions her feet seem to ask as she walks along the highway at the beginning of a long road trip to discover the truth of her life. The energy of intention and the energy of intuition are the two unseen forces at work in THE STORYTELLERS and WINNEMUCCA.
I like this definition of magical realism: where the supernatural is mundane and the mundane is supernatural. This best describes how I have the most fun writing. I take what’s unseen, what’s little used in this life, what’s soul-crushing, overlooked, taken for granted and put it all center stage, infusing it (or them in the case of characters) with supernatural power.
In THE STORYTELLERS, I flipped a lot of concepts of the unseen on their head. I enjoyed giving a seemingly powerless housewife, Julia, ultimate power. I enjoyed writing a confident professor, Alexandra, and having her discover the vulnerability of love. I enjoyed exploring lies and betrayal by creating a world in which Tamara and Rebecca’s lives become stronger and more abundant because of their effects. My favorite paranormal character in THE STORYTELLERS is The Heartman. He is an ancient demon and one that I had a great deal of fun writing.
In the end, it’s my experience that many of life’s demons are imagined. I like to play with these invisible things in my fiction. And the demons that are real? Well, paranormal/magical realism is the genre that gives me a great way to write adventurous and unexpected ways to leave them behind.
So what do you love about paranormal? Is it your go-to genre? What’s one of your favorite paranormal characters?
This was fun. Thanks for hosting me here today.
GIVEAWAY
a Rafflecopter giveaway
ABOUT THE AUTHOR 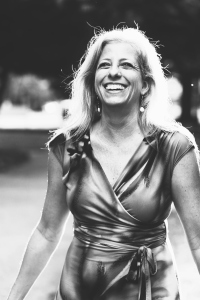 I love writing about enchanted road trips, cursed storytellers, shadow worlds, and alien romance while eating lots of popcorn. After twenty-plus years as a freelance graphic designer/animator with clients including E! Entertainment Television and The Los Angeles Times, I left the real world behind and followed my heart into the world of fiction. Little known fun facts––I can’t kill a spider but would gladly kill the tomato-plant eating gophers in my yard if I could get my hands on them, I wouldn’t mind dying in a vat of salted carmel ice cream from Portland’s Salt & Straw, next on my dream list is a trip to Indonesia, I daydream of doing stand-up comedy when I’m not completely terrified of it.
Facebook | Twitter | Website | Goodreads