Ruthie Knox's
ROMAN HOLIDAY: The Complete Adventure
is out today!
We are so excited to share all of the information with you. Check out a terrific excerpt and enter the giveaway below!

ROMAN HOLIDAY is a contemporary romance published by LoveSwept,
an imprint of Random House.

The wait is over with this eBook bundle that includes all ten episodes of Ruthie Knox’s steamy, irresistible serial, Roman Holiday. Like all the greatest road trips, Ashley and Roman’s journey is full of unforgettable twists and turns. But what’s their final destination?
Ashley Bowman has always been impetuous, but even she is a little shocked when she chains herself to a palm tree in the Florida Keys hours before a hurricane is due to blow in. It’s all with the hope of saving her childhood home from a heartless Miami developer. But the moment she meets Roman Díaz she realizes he does have a heart—it’s just encased in ice. Ashley’s determined to get Roman to crack . . . even if she has to drag him all over the eastern seaboard to do it.
Roman can hardly believe he’s been talked into driving across the country with this brazen wild child in a skimpy bikini. He tells himself he had no choice—Ashley insists he meets the elderly snowbirds whose community will be displaced by his career-making development deal. But in truth he knows that there’s something about Ashley that makes him want to get a little wild himself . . . and the closer they get, the more tempted he becomes. 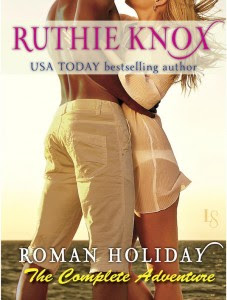 
The driver’s door opened, and black dress shoes appeared beneath gray slacks. The black top of his head crested the door, then disappeared as he ducked down to reach into the car—probably retrieving his hooded cape and sickle, just to complete the look.
But no. When he emerged from behind the door, his evil was far more subtle than she’d expected. The closer he walked, the more this rich Miami land developer looked like television’s version of a bad guy: tall, dark, expensive, beautifully proportioned, and—she had to admit—way more handsome than people were supposed to be in real life.
Ashley liked a handsome man as much as the next girl, but the ones who really got her going always had endearingly imperfect teeth, bad haircuts, unfortunate facial hair—some flaw that made them approachable. She picked the sort of guys who were game to go surfing on a whim or try out sex in a hammock even if they risked ending up in the dirt, slightly bruised and laughing.
Whereas this man—no way did he own a hammock. He was too perfect, his handsomeness nothing less than a loaded weapon aimed at the world. She imagined him bleaching his teeth so white that he purposefully blinded people when he smiled. You’d be gazing at his face, mesmerized by those teeth—which she couldn’t even see right now, but she knew just how they’d look, their contrast to the deep brown of his skin both surprising and delicious—and then you’d blink and he’d be gone, and so would your wallet and your house.
Possibly he’d leave you the hammock.
Of course, it was also possible she was projecting. She’d only been watching him for about four seconds, and she had, admittedly, a fairly strong bias against the guy.
His slick soles crunched over the crushed-shell surface of the lot. He didn’t walk so much as he loped, taking the circular pavers two at a time. His suit was so well behaved that it loped right along with him, too expensively tailored to look awkward for even a heartbeat.
When he’d passed the office, he veered off the path to make a slow circuit around the palm. His expression betrayed nothing as he took in the mound of mulch where Ashley sat. Her bound wrists, tucked tight against her lower back. Her bare arms and barer legs and barest-of-all feet.
He stopped directly in front of her.
“Ashley Bowman, I presume.”
A joke? He delivered the line with such dignity, she couldn’t tell if he meant to be funny.
“That’s me.”
He placed his briefcase on the ground and hunkered down, resting his elbows on his spread knees and clasping his hands lightly between them. Normal people would look awkward doing that, but he made it seem like he’d been born to hunker.
His shirt was black, open at the collar, his sunglasses mirrored. He took them off, and his dark eyes were mirrored, too. Impenetrable.
Good-looking, yes. But good?
She wouldn’t bet a nickel on it.
Not for the first time, it occurred to Ashley that chaining herself to the palm tree had not been her best decision ever. The idea had been to take a stand. Instead, she felt like a virgin staked below a volcano.
A nostalgic sort of feeling, since it had been so very long since she was a virgin. But this guy definitely had some magmalike qualities. Slow-moving. Molten. Dangerous.
The danger explained why all her frayed nerve endings were sizzling.
It had to be the danger. Because attraction under these circumstances would be insane.
Which was why she hadn’t glanced at his package, so conveniently on display in front of her.
No. She had not.
“I’m Roman Díaz. I’d say it’s a pleasure to meet you, but . . .” He spread his hands, encompassing the scene before him. “You’re protesting, I take it?”
“I can’t let you knock it down.”
“Yes. You mentioned that in your voicemail.”
So he’d listened to her messages. She hadn’t been sure, since he had never bothered to call her back. Or answer the letter she’d sent by registered mail. Or admit her to the inner sanctum of his office.
Ashley had done everything she could think of to get his attention, just as soon as her grief had abated enough to let her begin to process a freshly discovered set of horrible truths: That she didn’t own Sunnyvale. Grandma had sold it two years ago without telling her or, as far as she knew, anyone. She’d secretly and sneakily transferred title on the property to Roman Díaz’s development group, Ojito Enterprises, for a generous sum of money that had vanished—though she’d definitely spent some of it leasing the property back from Díaz.
“I’ll buy it from you,” Ashley offered. “Whatever you paid for it, I’ll double.”
He raised an eyebrow.
She had to admire his economy. The mere flick of an eyebrow said it all. He knew she had no savings to speak of, no property of value—nothing to her name but an inherited Airstream trailer full of her grandmother’s junk.
She didn’t have Sunnyvale because he’d taken it from her before she even had a chance to claim it.
He glanced at her bound hands. She’d looped the chain around the tree, then around her wrists, which rested against her back, knuckles brushing the ground. “Is that a padlock?”
“Yes. And I can cover the keyhole with my fingers, so you won’t be able to drill it open unless you cut them off.”
“I could cut the chain behind the tree, where you can’t reach.”
“I’ll rattle it. And probably if you do that, I’ll manage to get hurt, and the media headlines will be all, like, ‘Protester Mangled by Heartless Developer.’”
“What did you do with the key, swallow it?”
She’d shoved it down her bikini bottoms, where it had spent the evening tattooing itself onto her tailbone. “Wouldn’t you like to know?”
GIVEAWAY 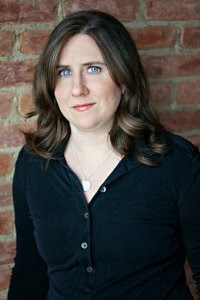 USA Today bestselling author Ruthie Knox writes contemporary romance that’s sexy, witty, and angsty—sometimes all three at once. After training to be a British historian, she became an academic editor instead. Then she got really deeply into knitting, as one does, followed by motherhood and romance novel writing.

Her debut novel, Ride with Me, is probably the only existing cross-country
bicycling love story. She followed it up with About Last Night, a London-set romance whose hero has the unlikely name of Neville, and then Room at the Inn, a Christmas novella—both of which were finalists for the Romance Writers of America’s RITA Award. Her four-book series about the Clark family of Camelot, Ohio, has won accolades for its fresh, funny portrayal of small-town Midwestern life.

Ruthie moonlights as a mother, Tweets incessantly, and bakes a mean focaccia. She’d love to hear from you, so visit her website at www.ruthieknox.com and drop her a line.