Blog Tour: Take It Off Series by Cambria Hebert 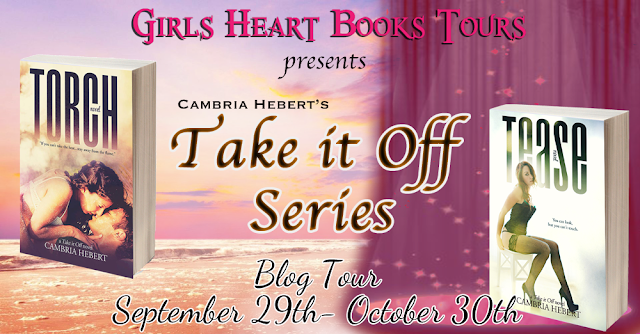 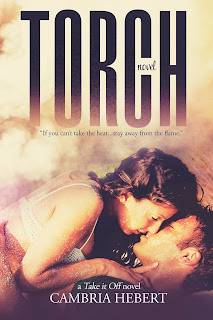 ***This is a new adult contemporary novel and contains sexual content and graphic language. It is not intended for young adult readers.***

If you can’t take the heat… stay away from the flame.

Katie Parks has been on her own since the age of fifteen. All she’s ever wanted is a place to call her own—a life that is wholly hers that no one can take away. She thought she finally had it, but with the strike of a single match, everything she worked so hard for is reduced to a pile of smoking ash. And she almost is too.

Now she’s being stalked by someone who’s decided it’s her time to die. The only thing standing in the path of her blazing death is sexy firefighter Holt Arkain.

Katie’s body might be safe with Holt… but her heart is another story.

As the danger heats up, sparks fly and the only thing Katie knows for sure is that her whole life is about to go up in flames.

Amazon I B & N Nook I B & N Paperback I Smashwords


From the Author ~ Here is a little information about the main character’s of TORCH! Katie and Holt! A little FYI Katie’s name was originally Meghan. BUT as I was writing Holt refused to call her that. Everything I wrote that he said, he called her Katie. Sooo, I gave him his way and changed her name. LOL!

Katie
Katie is a young librarian who loves to get lost in a book. She has lived on her own for many years and wants a place to call her own. She’s never really dated and doesn’t have any close friends. She the poster child for being a loner.

Katie has freckles, reddish hair and is very short and thin. Holt thinks she’s tiny. She thinks Holt is huge. Katie also likes to steal bacon off Holt’s plate and she has to sit on phone books when driving certain cars so she can see out of the window.

Holt
Holt was raised in Wilmington, NC by two loving parents. His Dad works in construction. When he was around sixteen years of age he volunteered for the fire department and spent a lot of time at the fire house. When he graduated high school he went into training and then was hired by the Wilmington Fire Department as a fire man.

Holt is a twenty four year old hottie. He has broad shoulders, short, dark hair and drives a candy apple red truck. He maintains that women are not allowed to drive his truck. Holt is a terrible cook and says the only thing he can cook good is cereal.

Oh, and he has big feet.


I really want to take a moment to commend Cambria Hebert for her transition into NA Contemporary Romance. It couldn't have been easy but she did a stellar job, and she deserves to be praised for creating fantastic characters and plotlines filled to the brim with emotion, tension and suspense.

This book started off with a bang and the action continued all the way to the end. I can't think of a worse way to die than to be burned alive, and Hebert brought me right into the drama, drawing me in with her fantastic descriptions and the heart-stopping moment when Katie was on the brink of being consumed by the flames.

Thank goodness the gorgeous, Holt was there to save the day. I have to say though, I did become a little suspicious of him. He just kept popping up at the right moments and I thought, if he isn't behind the attacks on Katie, then he has some serious stalker issues. I am happy to report that I was wrong on both counts.

Katie and Holt were hot together. They steamed up my Kindle screen on more than one occasion and their chemistry was palpable. That shower scene, yep, that was one sexy as hell shower scene and it made me want to go find my own gorgeous Holt Arkain just to re-enact it! LOL!! Out of all the sexy times they shared, that one just did it for me :)

But this story wasn't all love and lust, it was a fantastic mystery thriller. With someone out to get Katie, she was always looking over her shoulder and as the pieces fell into place, so the tension grew. This book was exciting, fresh and I'd recommend it to anyone who loves a sexy, romantic, suspense-filled thrill ride. That is if they can handle the heat ;) 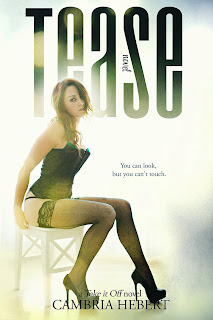 Harlow is a broke college student. When her tuition assistance is taken away, she is faced with a choice: admit to her mother she couldn't hack it on her own or make a lot of money fast.

So she gets a good-paying job.

She thought it would be easy, but it turn out being sexy is a lot harder than she thought. When a few mishaps work in her favor, she manages to hang on to her job and catch the eye of the Mad Hatter's best-looking bartender, Cam.

She's also caught the eye of someone who wants to do more than look, someone who's decided she's nothing but a tease.

As the clothes come off, Harlow finds herself caught between list and murder, The only thing she knows for sure is that her new risqué job is a lot more than she bargained for.

***This is a new adult contemporary novel and contains sexual content and graphic language. It is not intended for young adult readers.***

Cambria Hebert mentioned that she had so much fun writing this book, well I have to say that this book has to be one of the most fun I have had the pleasure of reading recently :) I loved everything about it.

Firstly, Burlesque is one on my favorite movies, and this book had that feel to it. It was exciting to watch Harlow (LOVE that name!) as she took on the unknown and dived head first into the world of stripping. I think she did a fantastic job of it as well. She put the tease into striptease and showed that you don't have to bare it all to be a hit!

And then, there was, Cam! Well now, he has to be the sexiest man I've EVER had the honor of being introduced to! I have to admit that I was a little jealous of Harlow, but because I loved her just as much I could forgive the fact that she stole his heart.

This book had all the makings of a superb NA Contempo Romance, but it offered so much more. It gave a refreshing lift to what's become quite a monotonous tone in this genre. Hebert created exciting characters that latched onto my heart from the first page and I still find them popping into my head from time to time. Yep, especially Cam and those drool-worthy abs of his. There was plenty of sexual tension and the chemistry between Cam and Harlow was off the charts, but without trying too hard.

I'm really so excited that Cambria Hebert decided to take the leap into NA Contemporary Romance. She has a real hit on her hands and the Take It Off series just keeps getting HOTTER and HOTTER!! Can't wait to see what more she has to offer!! 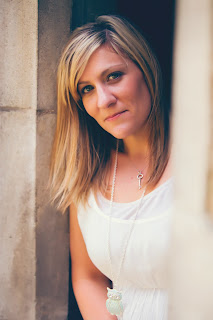 Cambria Hebert is the author of the young adult paranormal Heven and Hell series, the new adult Death Escorts series, and the new adult Take it Off series. She loves a caramel latte, hates math and is afraid of chickens (yes, chickens). She went to college for a bachelor’s degree, couldn’t pick a major, and ended up with a degree in cosmetology. So rest assured her characters will always have good hair. She currently lives in North Carolina with her husband and children (both human and furry) where she is plotting her next book.